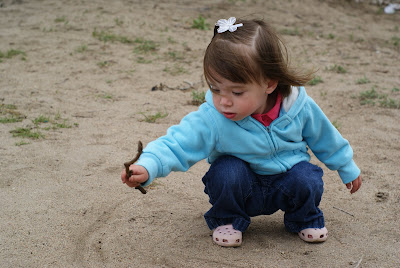 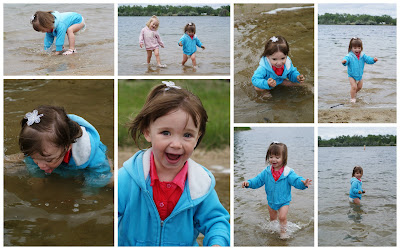 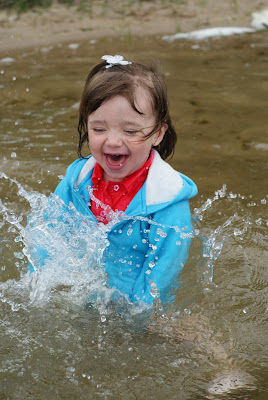 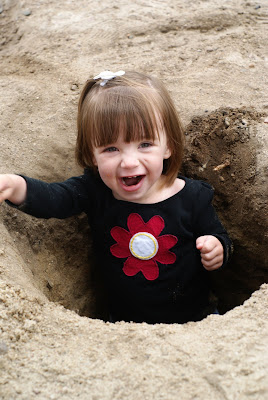 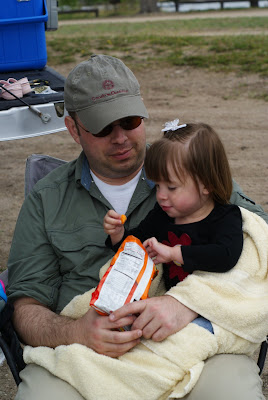 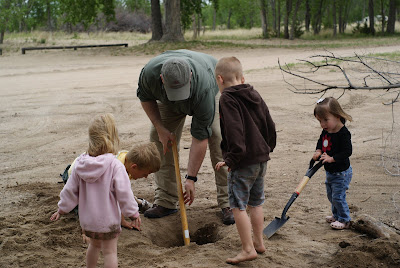 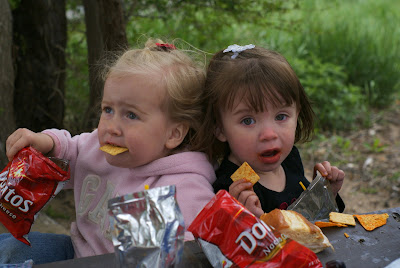 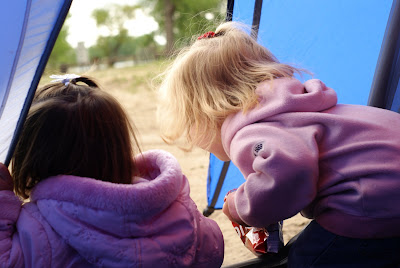 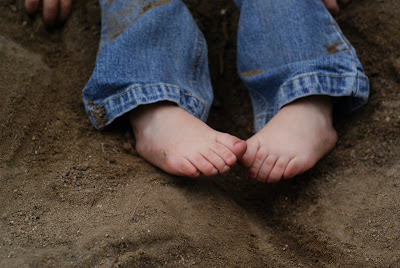 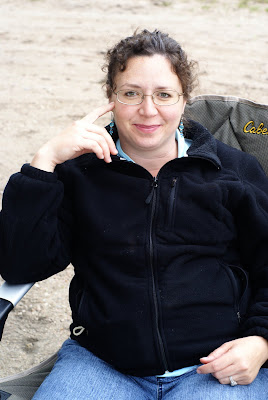 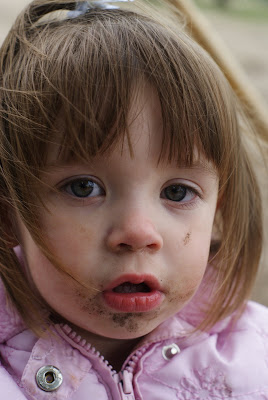 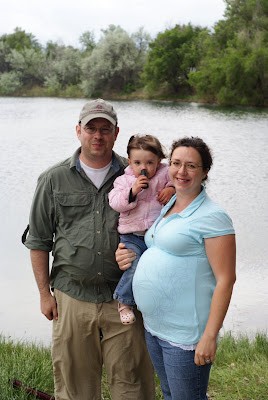 We had so much fun today! The Haley's invited us over for a mountain man breakfast, which consisted of sausage, hash browns, eggs, bell peppers, etc cooked in a dutch oven. It was super yummy and very filling. I was not hungry all day long. Morley celebrated his 10th birthday so we were able to watch him open family gifts. Then we went back home and packed up the car for another day excursion to Bridgeport Lakes.

Matt found a lovely spot near the swimming beach, perfect for fishing and getting dirty. The girls immediately found sticks to write in the dirt with. Ella fell into the pond within 5 minutes of getting there. SOOOOO, Alison and I took the girls over to the swimming beach to throw sand and sticks into. First, we rolled up their pants. Then took the pants off. THEN, just let the girls get soaking wet. They had a blast. Mia kept muttering to herself, "I not cold!" She stayed in about 10 minutes longer than Ella. Me, I enjoyed using the manual mode on my camera to capture some fun images of our day. After swimming Justin held Mia in her towel for a snack and drink break.

The boys entertained themselves with two shovels and one large/deep hole. Justin was in the thick of all the digging. Soon Mia and Ella joined in the fun. Drew was often seen with only his bum sticking out of the hole. I made sandwiches, chips, and fruit for lunch. It was a hard lunch to make!! Those chips take forever to make...the fruit, even longer. The girls were still pretty cold so I spent a while in the tent Justin set up to warm up outside of the wind. We played "running around Mommy" an exciting game consisting of eating chips and running circles around me, often tripping on my feet. They warmed up beautifully!!

The boys caught a dead catfish, which they proceeded to disembowel, char over the fire, and dare each other to eat. I am excited that soon our boy will enter the fray. Even Ella dared to bite several live minnows held in the bait box. It was hilarious to see a wilding flipping tail hanging out of her mouth. She definitely has three brothers. Mia, would not even look at the fish.

The kids proceeded to get very dirty. Mia found a water bottle to stuff dirt and rocks into, after which she tried to drink the contents. After each bite of rock she would exclaim, "Yummy!" Soon she had a true mud goatee and dirty toes to match. I spent most of the time with my precious camera practicing shooting in manual mode (yes, I HAD to mention that again). The weather cooled down considerably around 4:30 so we packed up and headed back home. Less than 20 miles outside of Sidney the rain started to come down in a vengeance. We are glad we went north instead of south. For the most part we avoided all the forecasted rain. The best part about playing in the dirt is taking a shower afterwards! That was delicious. Now all we need is a good night's rest.