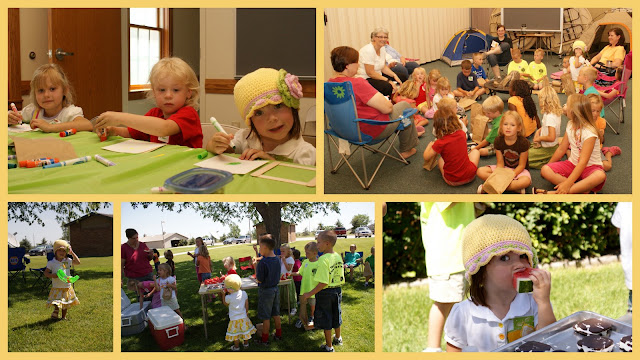 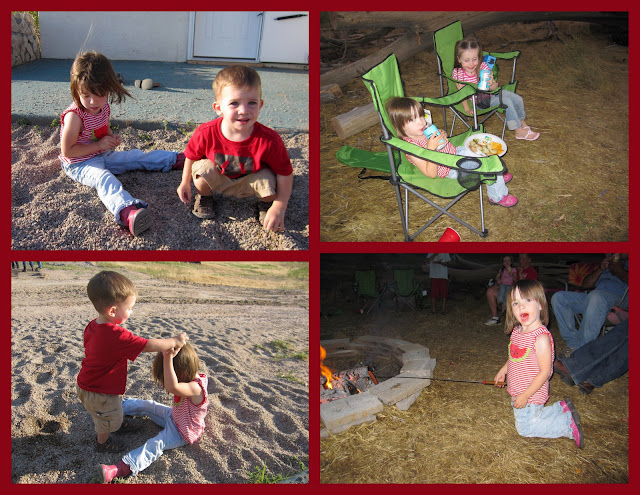 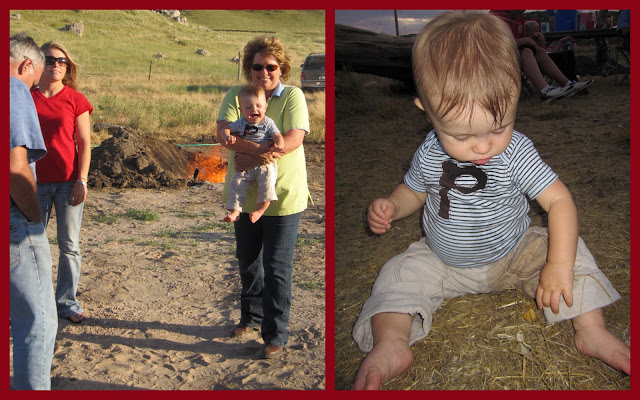 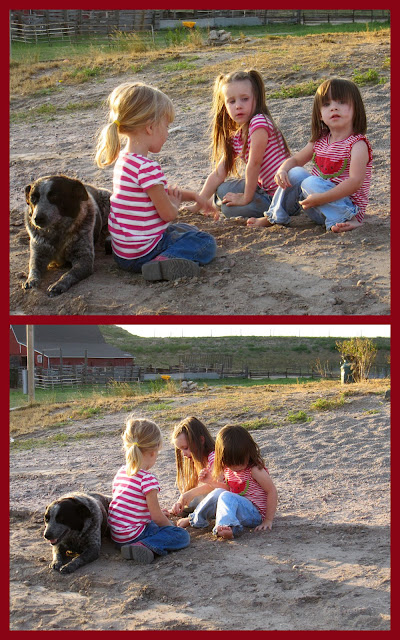 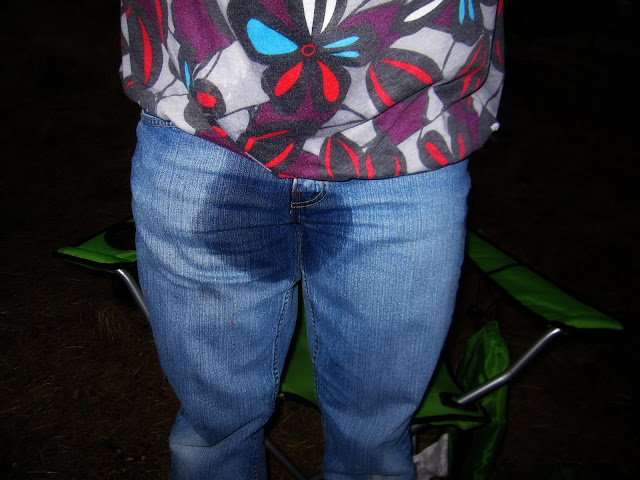 Saturday was a BUSY day for everyone involved. The primary had our second quarterly activity, a camping theme. The presidency arrived early to set up tents and the stations. I found a fun activity we sort of followed on the internet. There were five stations: out door games, an art activity, a first aid station, campfire songs, and a "faith" activity. We were all sweating bullets wondering if any kids would show up due to swimming meets and vacations. About 20 children showed up, much to our relief! Phew! I went home and brought Amelia over to participate, even though she's in nursery. I manned the camera and the art station. We made popsicle stick frames, decorated paper and glued a picture of Jesus to the paper and frame. The kids had a good time! We had five groups of kids, rotating through each station nearly every 15 minutes. After the activities we gathered to sing the campfire songs then outside for cold watermelon, water, and smores.
It was super duper hot on Saturday. The temperature gauge read about 99 but the humidity made it stifling. Amelia really wanted to swim so we headed to the pool for an hour. Both kids did not last long. After naps we headed out to the Titus homestead for a foil dinner campfire. Oh my, the kids had sooooo much fun. Amelia was covered in dirt within 10 minutes. I had to run home to get her boots, pants, and a grungy shirt. Little Matthew had a blast pouring dirt in Amelia's hair, she had fun receiving the attention. The three amiga's were so busy that squeezing in some food was last priority. Amelia did enjoy smoking a hot dog! Towards the end the three girls (Dani, Ella, and Amelia) decided to make soup for King the dog. He is a huge Great Dane, almost the size of a pony. Oh the tears and anguish when we ripped her away from making dog soup to go home. You'd think we never gave her anything by the way she carried on, I nearly imagined gnashing of teeth. Giggle. I told her we could come back and play another day. Maleia invited us to ride horses this coming week. Amelia is convinced they have a horse named Laddard for her, which is really hers and that we want to buy her a pink saddle. Dream on kid! Phillip decided to spill a large amount of lemonade in my lap. From all appearances it looked like I peed my pants. Justin teased me mercilessly the rest of the evening. I am pretty lucky he takes me anywhere.
Another funny: on our way home from church Amelia told Justin her eyebrows were burning. She must be going through a phase of noticing everything her body does. She peed through the toilet seat at church, drenching her underwear and the floor. While I cleaned up the mess she grabbed her underwear and ran into the chapel, loudly telling Justin about her wet pannies, proudly waving them about. Glad I was not present. 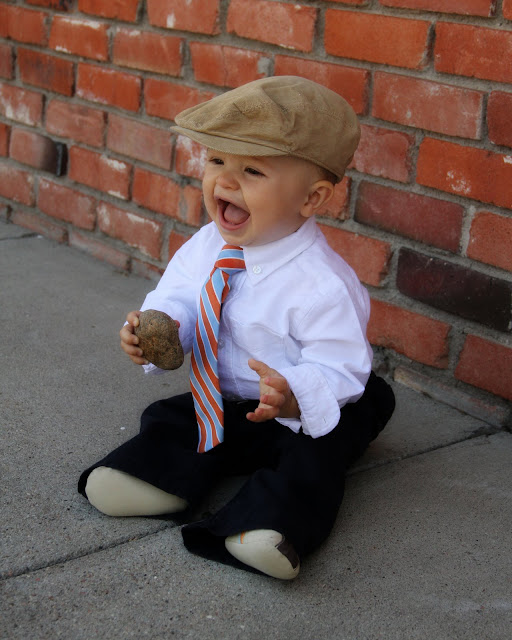 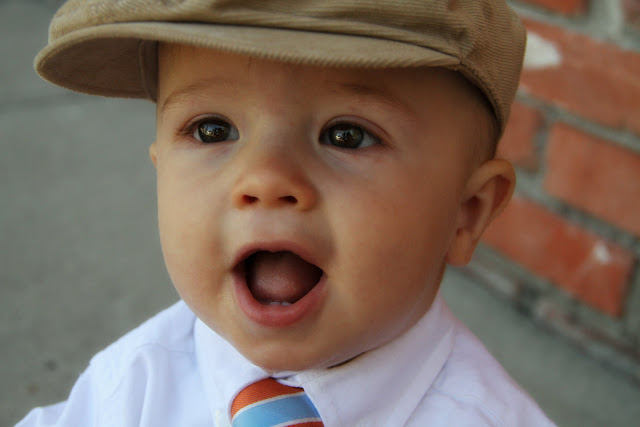 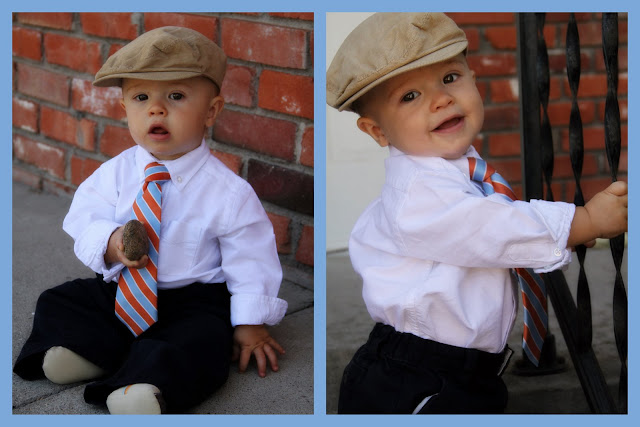 I totally meant to publish this last night but a thunder and lightening storm changed my mind. Our little Phillip was so darling yesterday in his church clothes! I sewed a onesie bottom to his shirt to prevent untucking and made the tie from an old child's tie. Justin was kind enough to tie a single Windsor knot for me, cut the tie in the middle of the circle, sewed some elastic to the ends, and wah-la...a new baby tie. What a happy little soul. Phillip is totally off and crawling now. He is experimenting with different types of crawls, my favorite is the stink-bug crawl with straight legs. He is all over the place. My house is a constant mess due to his explorations.

We had a nice quiet Sunday. I finally pulled out my garage sale find, a pasta machine, and made homemade spaghetti noodles for dinner. With some delicious homemade sauce and fresh green beans we were living the high life. Homemade pasta is to die for! Amelia really enjoyed turning the handle for me and eating the dough. We had an early night because the kids were super crabby. It was awesome to relax and watch the lightening.

PS: Check out Phillip's bottom teeth...you can actually see them now! No other teeth to report...

Posted by Jenni Call at 8:57 AM 3 Stupendous Remarks