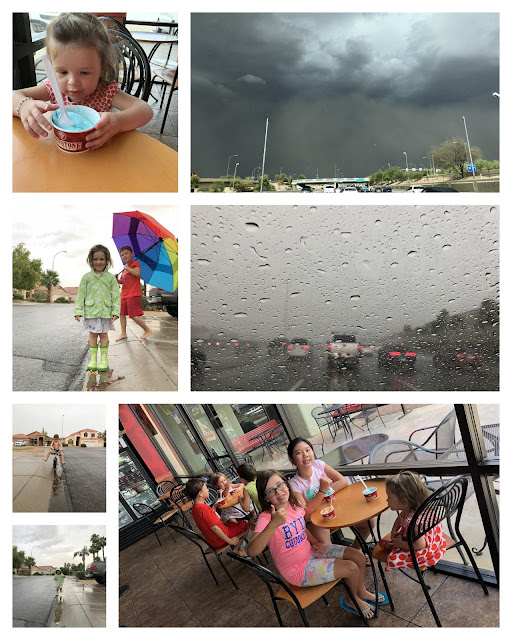 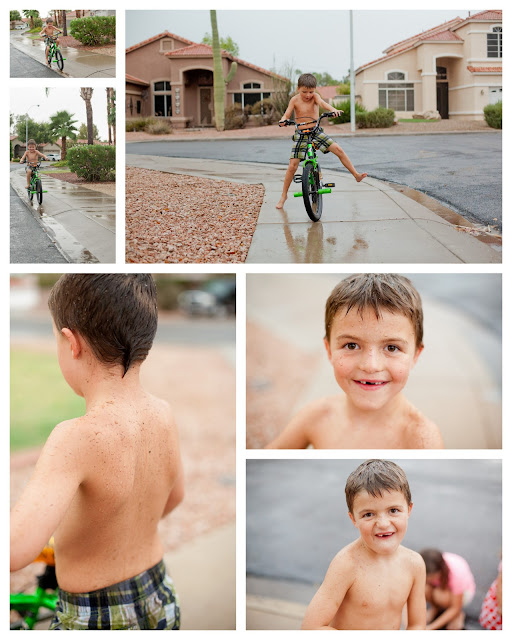 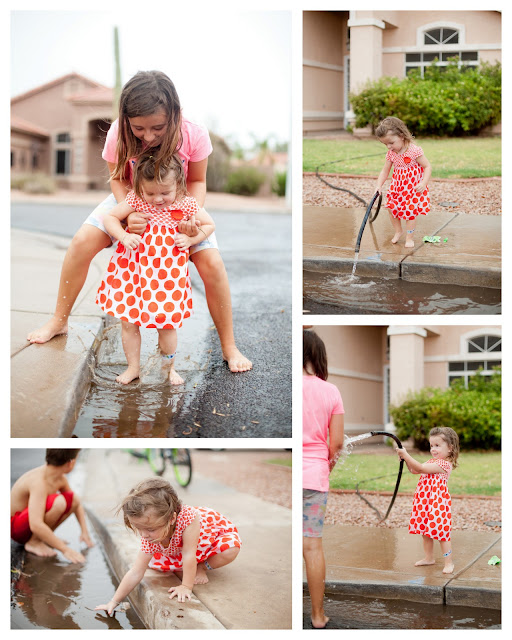 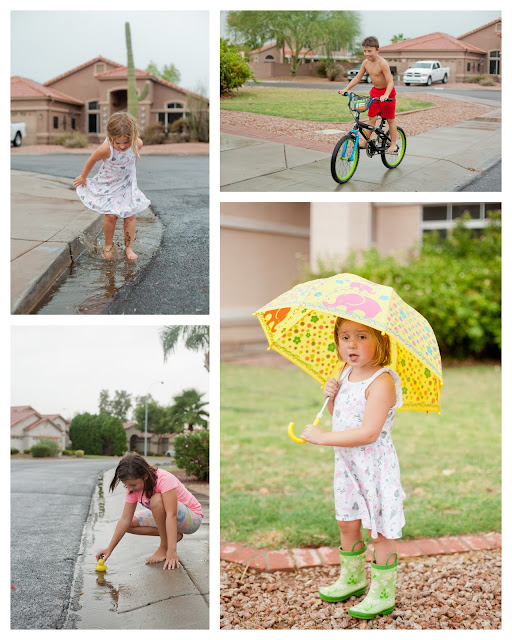 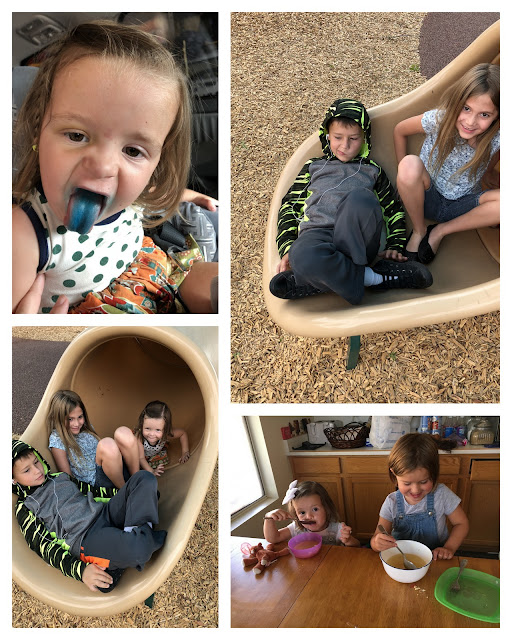 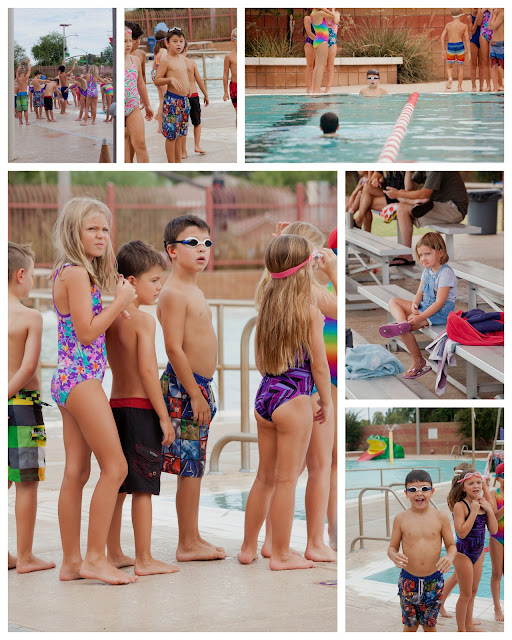 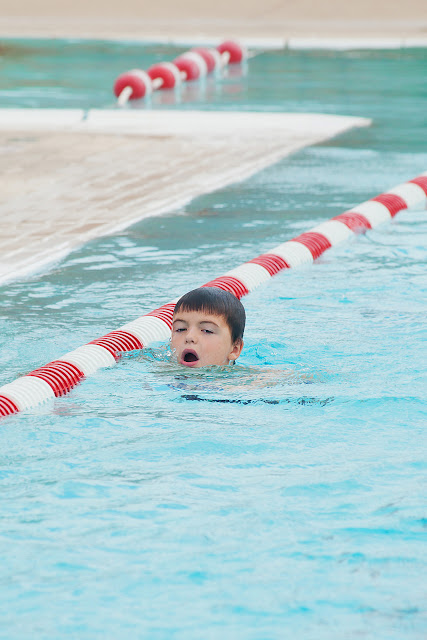 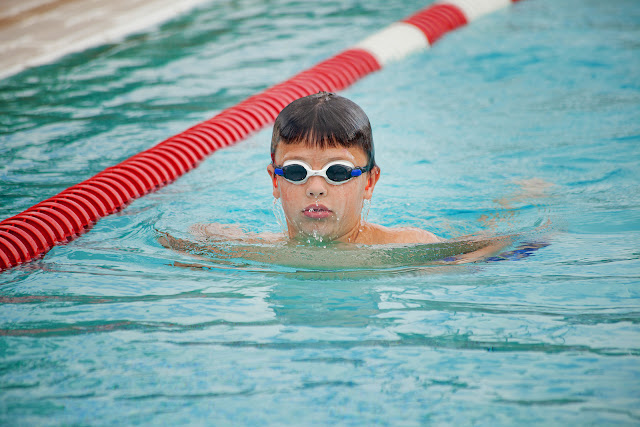 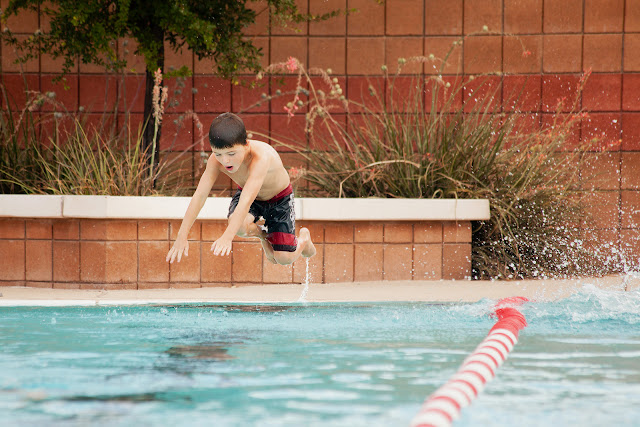 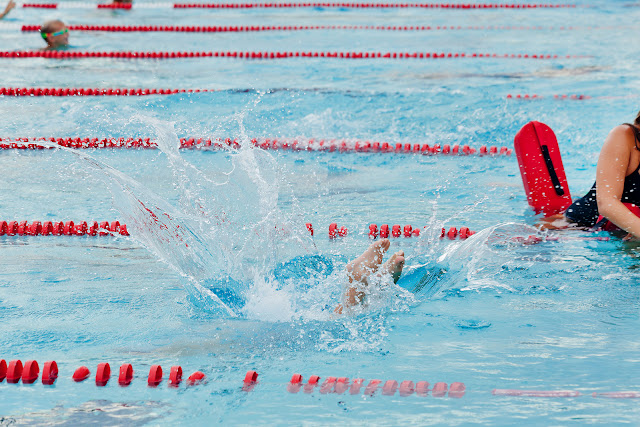 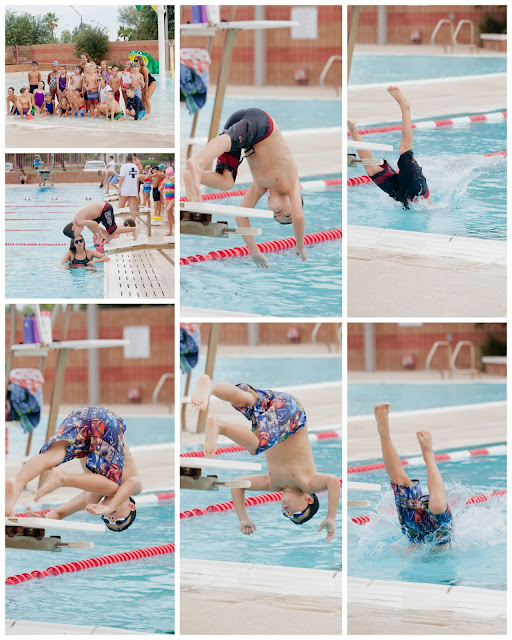 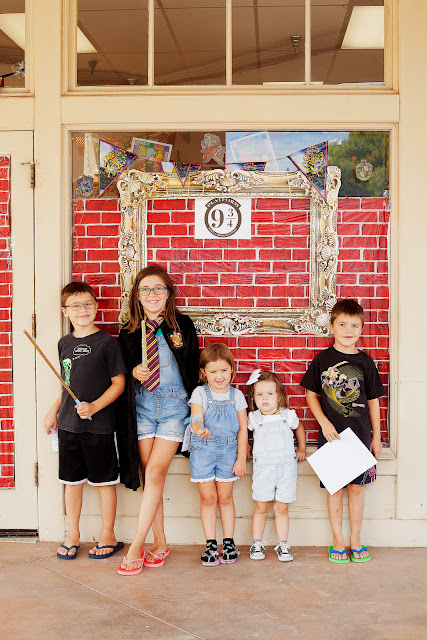 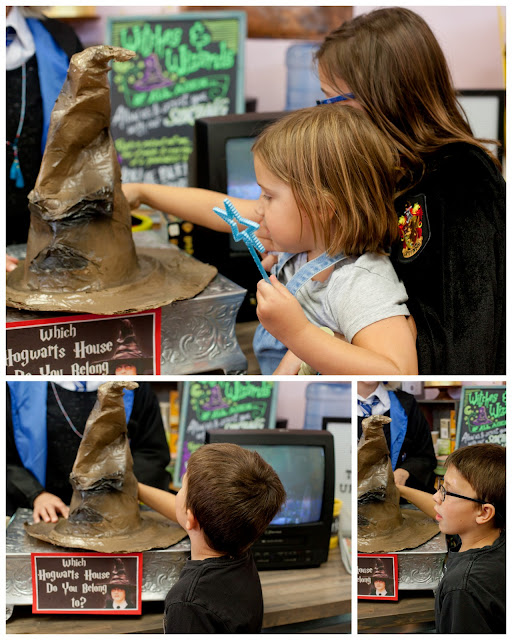 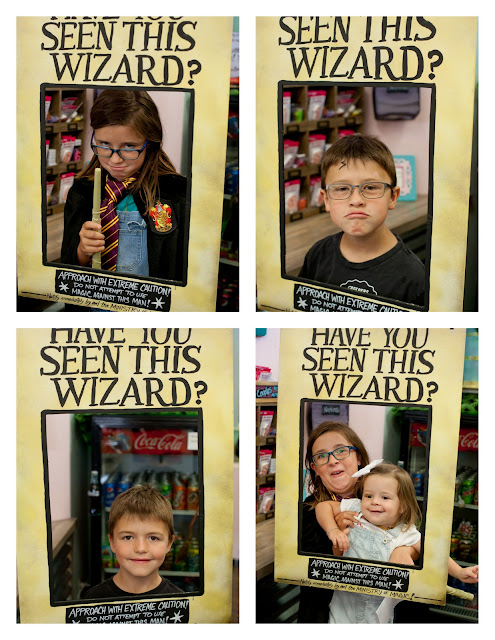 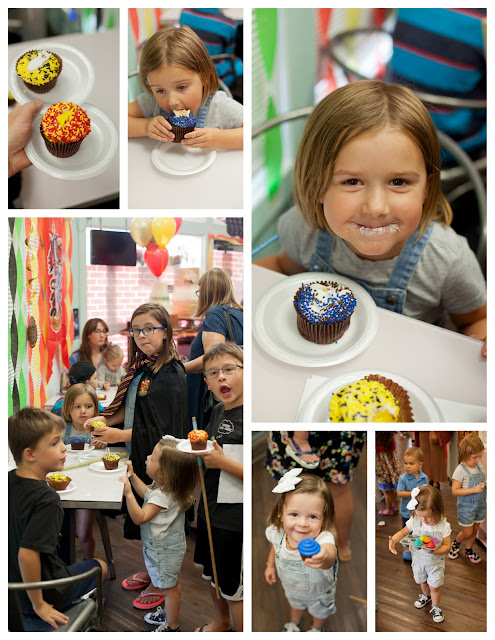 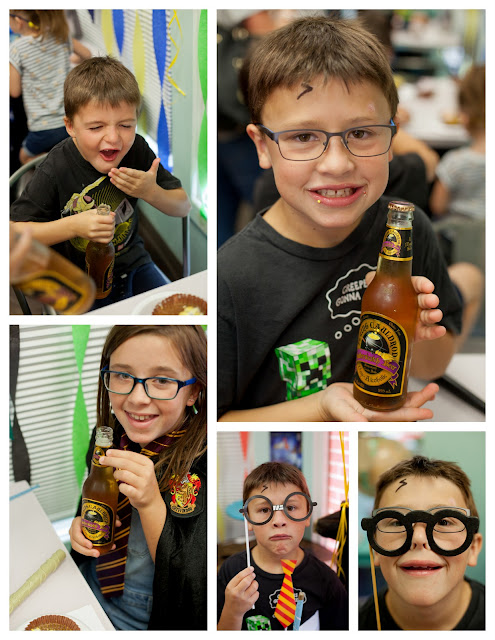 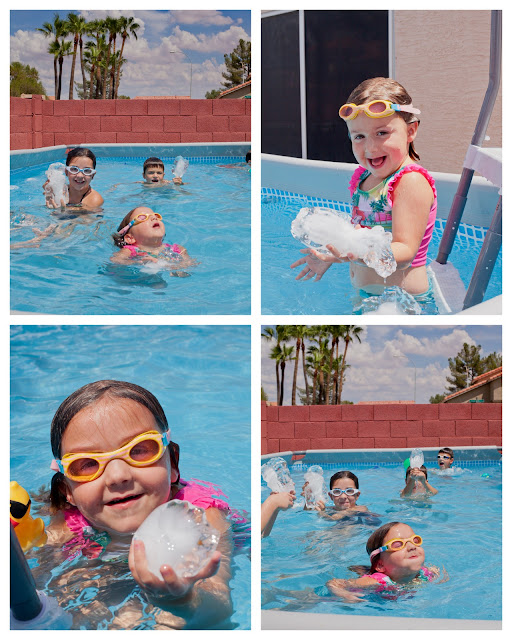 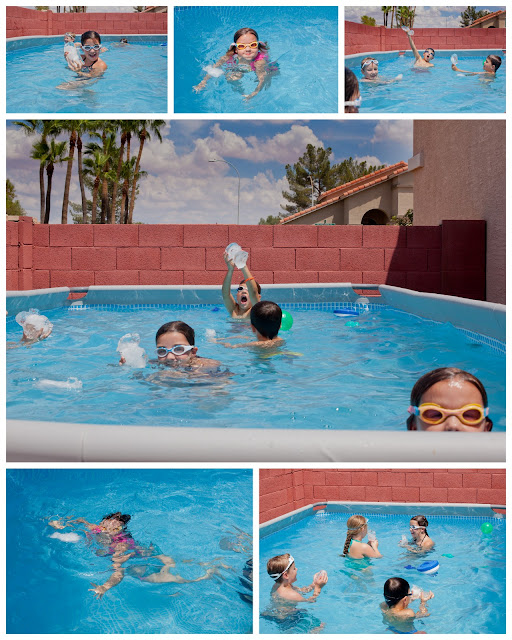 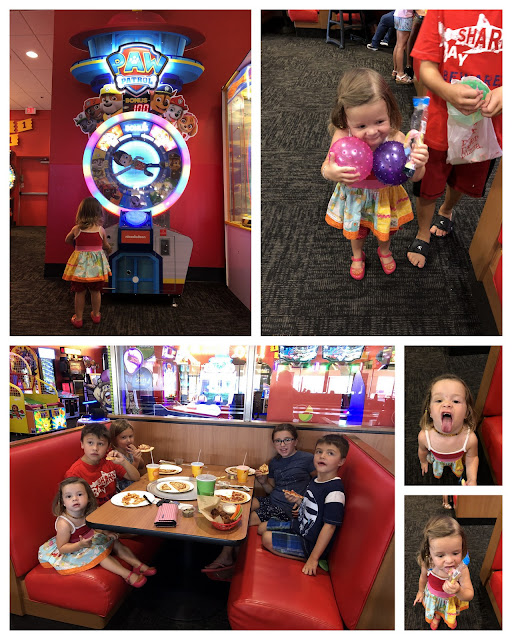 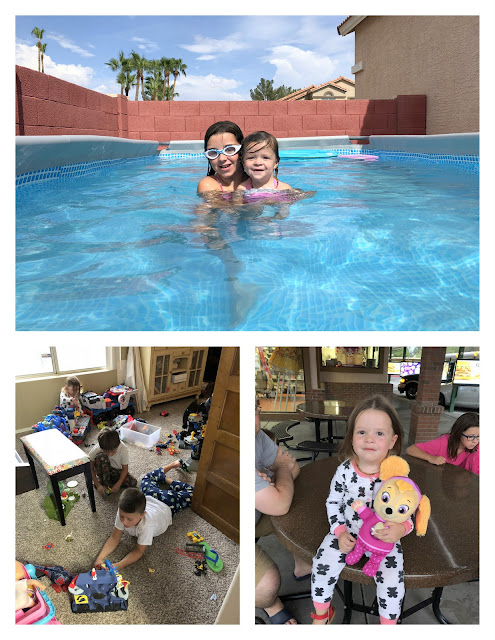 Miss Chloe came to spend the day with us on Monday. She had her piano lesson then basked in our cluttered house until after 7:30 pm. I love having her around since Amelia does not whine as much! We reached bored saturation around 2:30 pm. I heard that Coldstone in Tempe was giving away free ice cream so we all packed into the van and raced over there for a treat. The store gave away their $1,000 of ice cream a few minutes before we arrived, bummer. Since we were there and all the kids looking at me expectantly, I caved. Soon the kids were crowed around tables with cups of bubble gum and mint ice cream filled with gummy bears (gag). My phone bleeped an alert about a large approaching sand storm. Indeed as we headed home an incredible mass of dark clouds with a layer of tan dust swirling below raced towards us. The storm caught us head on right around the Gilbert exits. Chloe was almost white with fear, us Nebraskans were not terribly impressed. Mostly just muddy rain that swiftly fell and choked up the gutters. Josie laughed each time the van went through puddles spraying a curtain of water past her window! Once at home we spent a lovely hour playing in the rain. I convinced the boys that riding bikes through the puddles was amazing, they finally agreed and had the time of their lives! Everett was covered in muddy water before he finally stopped. Amelia made Mr Duckie a pool out in the gutters. Once the rain stopped, the kids turned on the hose to keep the gutters filled with water. Such a lovely holiday! Our FHE was quite embarrassing this week. While working on the blog last week I happened on some pretty racy photos that Phillip took of Evelyn's bum. The entire situation was quite innocent BUT gave Justin and I an opportunity to have a serious chat about pornography and keeping private parts, well, private. Chloe and Amelia were red-faced most of the conversation! I pulled most of the content off of the parent's site for teaching children about sex and the new LDS pornography helps website. After the serious part of the lesson the kids went off on a scavenger hunt finding items around the house that help us keep our bodies safe and healthy (food, exercise items, sundry items, clothing, etc). Phillip had us play charades and Everett chose smoothies for treat.

I watched the boys for their last swim team practice, there are more practises but only for the kids who qualify for pre-lims and the competitions. They made it!!! I am so proud of the older kids for sticking to all the hard practises and learning so much. Phillip killed it out there during practice. He really did his best. Everett really struggled with swim team. He barely swam across the pool, mostly hanging onto the dividers as he slowly swam under the water. I wish the coaches let me know he really needed individual swim lessons to learn his strokes. The coaches all told me at the beginning that Everett would be taught and helped along. Seemed like they just let him flounder, even letting him jump in however he desired. It's partly my fault for not attending practises, Josie and Evelyn are asleep most mornings and taking Josie is pure distraction since she only wants to swim. Next year I will enroll Everett in lessons before the season starts.

I heard about a local bakery hosting a Harry Potter event for free cupcakes and butterbeer. The kids dressed up and scrounged up wands for the party. I printed off spell lists for the kids to practice their spell making. Everett was disappointed there was not a spell that made lightening shoot from his wand. The bakery was all decorated with Harry Potter paraphernalia. The kids were sorted into a house, Mia, Josie, and Everett into Hufflepuff, Evelyn into Ravenclaw, and Phillip into Gryffindor. The cupcakes were so delicious! I indulged in a bite or two. Evelyn and Josie loved the play kitchen area. Amelia was impressed the butterbeer we made at home tasted the same as the bottled version we tried (just with a more chemical aftertaste). The kids made wands and played with the photo props. All in all a nice time for everyone.

Thursday we headed to the mall early in the morning. Build-a-Bear hosted a pay-your-age sale. We parked, walked to the corner, saw the line, and got back in the van. The line was stretched completely around the block and down to the next block. Looked like a 6+ hour wait in the humid heat. No thank you. So we headed to Peter Piper Pizza in order to redeem the kid's free pizza coupons earned through the library reading program. We had no idea the pizza parlor also had an arcade! Score. I shelled out money for tokens. The kids raced about shoving tokens into machines like crazy folks. All the kids loved the water shooting game and the car racing game. Josie was content to win two rubber balls from the claw game. Her favorite game by far was the Paw Patrol game. I had to laugh as I caught snatched glimpses of the kids clutching cups of tokens in one hand and reams of tickets in the other. Once the tokens were used up the kids counted out their tickets and redeemed their points for cheap trinkets and candy. I remember thinking as a kid why my Mom hated these amazing arcades. Now I know, total waste of money! Alas, I tucked that feeling away and let them play much like my mom did way back when. One our way home I stopped at a water store and bought 8 10lb blocks of ice. Our pool's temperature was hovering between 96 and 98 degrees. We threw the ice into the pool and let the kids loose to play icebergs. The Russo's came over to enjoy the event. Once the ice melted the pool temperature was down to 92.  Josie can swim almost across the pool now on her own!

Our week was quite overcast and humid. Several thunderstorms ripped open throughout the week. I contentedly enjoyed a nice evening thunderstorm after everyone else was in bed. Even with the lower temperature the humidity makes the heat almost unbearable.

Justin and I hired a sitter Friday evening. We caught some dinner at a salad joint then watched Ant man and the Wasp. I like going on dates without the kids. It's nice.

We spent Saturday morning working on the yard. Justin trimmed the bushes out front and mowed. I worked with the kids in the backyard picking up clutter. Amelia and Evelyn hosed down the playhouse since it was covered with dirt from the storms. Phillip cried and whined for an hour about picking up dog poop. He ended up paying me $8 to do the chore for him. Nice! I took myself to 7-11 for a cold drink, thanks for the money dude! He was so unhappy about paying me all of his money I agreed to let him earn back $5 if he helped me with the garage. It needed some major de-cluttering. The boys worked on cleaning out the lego and dress up area. Phillip worked hard and earned back $5 of the $8 dollars. We were all dripping with sweat before lunch rolled around. I dropped off a load of stuff to Goodwill. After naps we spent some time cooling off in the pool, wait, the water was the same temperature as outside the water. Phillip and Everett brought in the Imaginext toys to the living room. They spent the rest of the evening playing with the toys. I found a plush Skye for Josie off Amazon. She was so darling while opening her new toy, gushing over it. She totes it around all the time now.