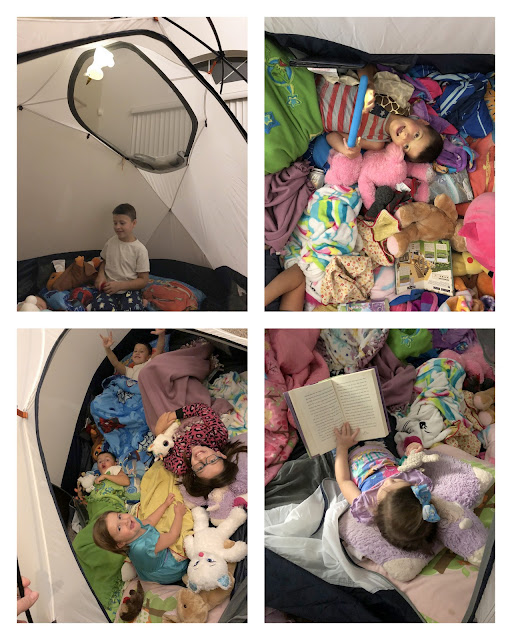 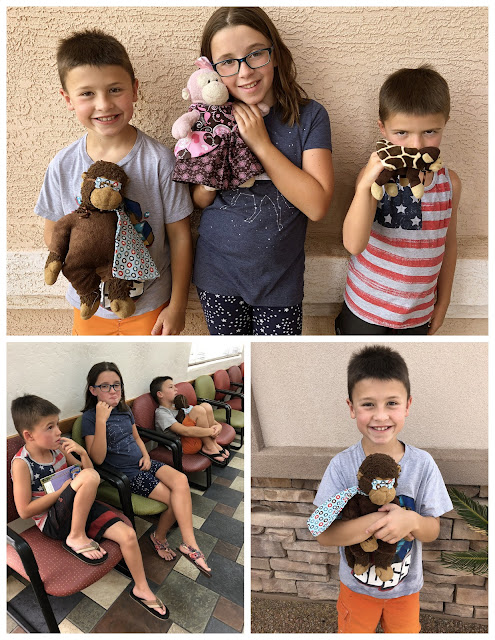 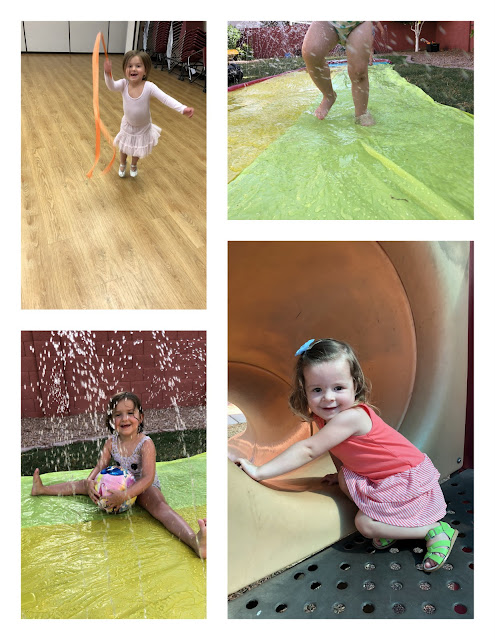 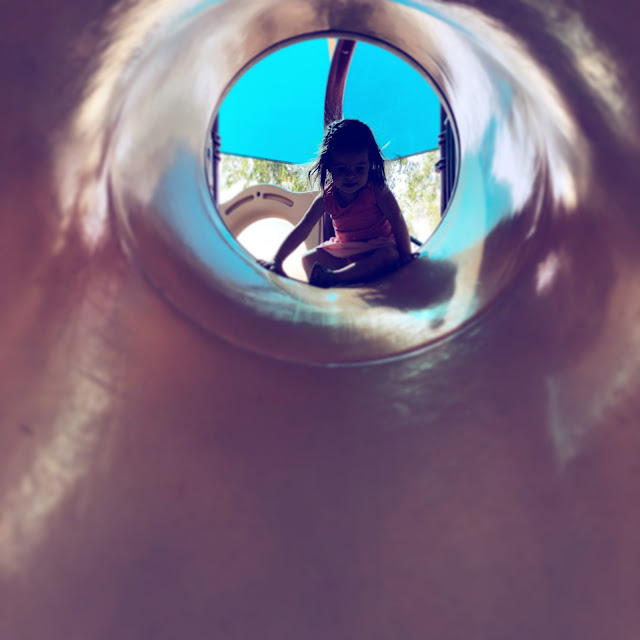 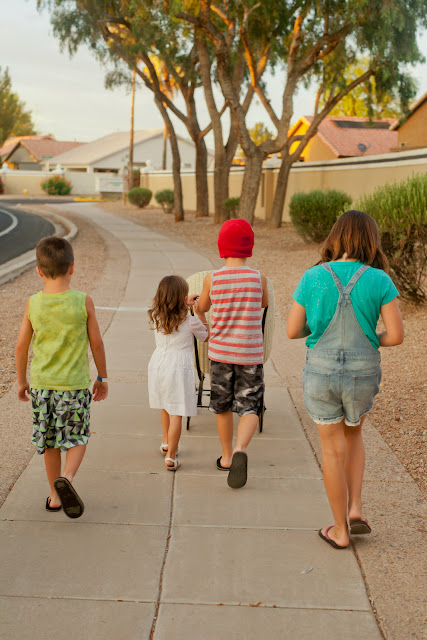 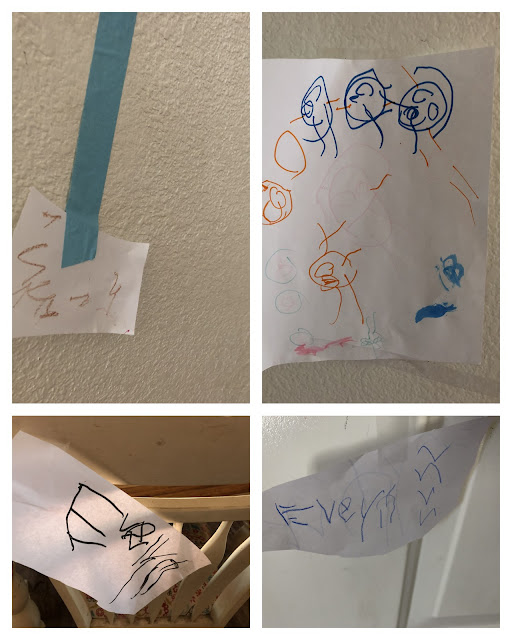 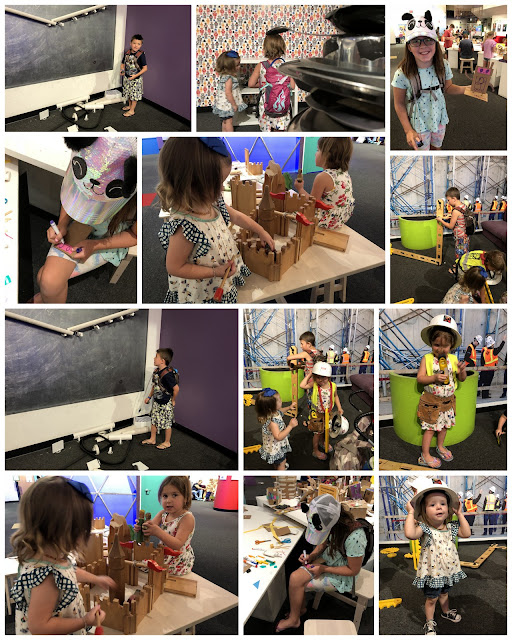 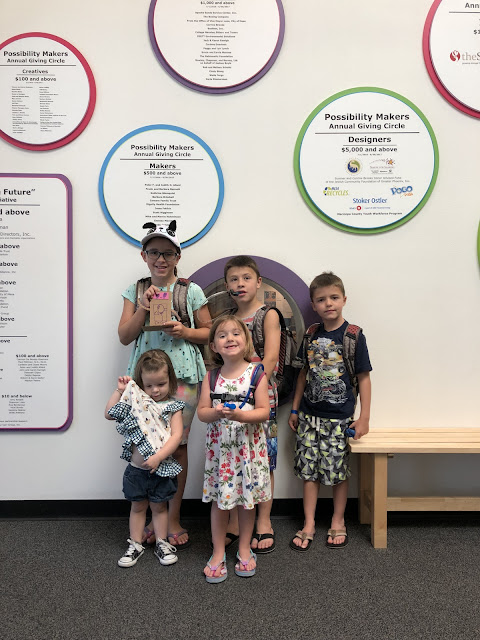 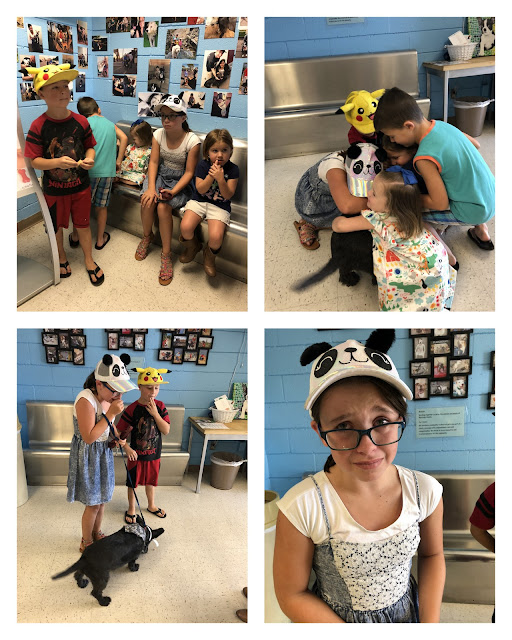 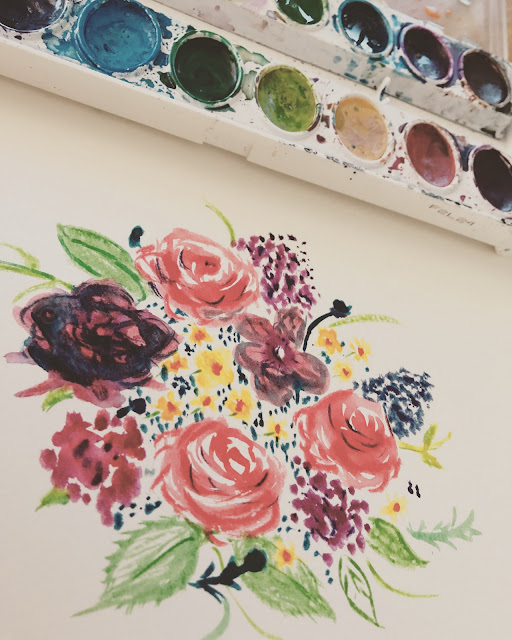 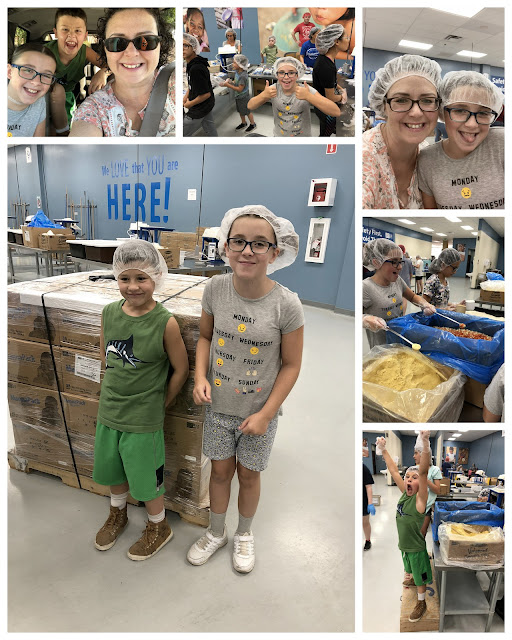 We kept the tent up for a couple days just for kicks and giggles. The kids used the tent for a reading center, to lounge in during tech time, and even a base for Pokemon trading games. Everett slept in the tent Monday night as well. I could not take the mess by Tuesday evening so had Justin take it down. The kids had such a good time with it! We all giggled when I found Josie "reading" Amelia's book just like her big sister. For our "Make it Monday" the kids wanted costumes for their favorite stuffed animals. Mostly, it turned out to be making a costume instead of a kid based activity. I made a cape for monkey binky, a brown fur suit to increase Cager's snuggle factor  along with a cape and mask, and a complicated dress for Mi-mi. Mimi even got new stuffing since she was quite floppy. We headed back to the Dr since Amelia's ear was hurting and not improving. I had the Dr also look at a mysterious rash Josie had, turns out it was a staph infection. Yikes. Phillip's ears were also still swollen and not much better so the Dr gave me drops to put in his ears.

The boys had a fun play date with Owen and Jack on Tuesday afternoon. The tent was a rousing success. I barely saw the boys as they ran here and there playing Pokemon. Evelyn roped Jack into playing "baby in my tummy" with her. He was not too keen on the game but she is quite persuasive. Soon she had Jack playing Barbies and all sorts of cootie related girl games. He forgot about the girl aspect as long as the big boys did not notice. Amelia and Chloe enjoyed a quiet afternoon at Averie's home making soaps and playing with clay. We had a really fun pool session. The pool needed a bit of extra water so we played with the hose in the pool! We made up a game called cold bum, essentially spraying cold hose water on the bum.

Evelyn had her first Island Princess class with two of her Primary friends, Caitlyn and Miranda. The rest of us enjoyed playing in the recreation center. The older kids played ping pong, pool, and foos ball. Josie and I headed outside to play on the slides in the 103 degree heat. Justin and I are impressed with Evelyn's swimming skills after only 4 lessons. She is quite the little fish. Evelyn taped little pieces of paper all around the house this week. Some papers had her name, others drawings of "nuffings," and directions to the space station. She loves to cut paper and use tape.

We explored a new pool down in Queen Creek at the Mesquite Groves center. It is the only pool with a climbing structure. I am really surprised at the lack of "cool" pools around the area. Most public pools are just regular rectangular pools with diving boards, some have zero entry areas for the younger crowd but almost all of those areas allow access to deep water. Seems like Utah has pretty fun pools all over the place, indoors and out. You'd think in a desert folks would demand more leisure pools. The Mesquite Groves pool was quite fun. It had a whirlpool area, two large slides, splash pad, lazy river, toddler area, and a separate area for swim teams to practice. We had such a blast. With Josie I tend not to keep her in a floatie and instead let her try to swim about. Evelyn learned quickly how to fend for herself. Phillip and Everett spent a chunk of time jumping off the diving boards. We will head back there for sure. I am taking some photography classes through Meg Bitton. Her training videos are so amazing and instructive. At this time I am in an online posing bootcamp training for the month. I asked two little girls to be models for me, free of charge.

We traveled to the Idea Museum for our weekly outing. I was a bit disappointed since half the museum was closed while the exhibits were switched. It was much smaller than we anticipated. After an hour we were ready to leave. I had to buy socks so the kids could play in the toddler area, which bought us another hour of play. The museum is based on art. Amelia made a cute robot out of cardboard and other recyclables. Phillip and Evelyn enjoyed the large building set the most. All of the kids loved the toddler side since it had more role-play areas like a pet clinic, food store, farm, a stage, train, and foam block area. I was thinking Children's Museum level! Somehow the side gate was left open after the bins went to the curb. Dog Vader escaped from 9-10 while I taught piano lessons but he came back for a drink of water. I remember seeing him before we left for the museum. After we left for our outing he left as well. We did not notice he was gone until Jacob noticed the open gate at 5 pm. I drove around our area knowing Vader would be hard to spot or find since there are so many little neighborhoods and anyone could have provided shelter until he was found. I posted a lost ad on several media platforms. Amelia and Justin made fliers they taped up once he got home from work. I had to run to Costco so missed most of that action. We finally heard that animal control picked him up a couple miles away at Val Vista and Guadalupe roads. Yay! Prayers answered. All the kids were quite concerned about his safety and well-being. Evelyn was convinced he was off to enjoy a sleepover with other pets.

I had an early morning photo session with a darling 6 month old in my garage. We aimed for early due to the heat, it was over 100 at 9 am in the garage. The baby got to cool off with a milk bath! Phillip was overly helpful as he used my squeaky chicken to capture the baby's attention. He got banished more than once but kept coming back and sneaking chicken squawks right in my ear. After the session the kids immediately piled into the van anxious to fetch our dog. We got to the animal shelter 15 minutes before it opened. It took the clerk forever to process all the paperwork and several seconds to charge us $130 for his release. Vader now has a micro chip tag, updated shots (he did need those), and lots of treats. Amelia burst into tears when the handler brought out Vader. The dog seemed happy but ambivalent, I'm sure he was dreaming of his spot on the floor nestled in a blanket for a nap. We headed home for a quiet afternoon. Quiet, until 10 extra kids came over for art lessons! This week I taught the kids about using watercolors. The younger crowd made a rainbow fish using a straw to make rainbow tails. The older kids learned more advanced techniques like water washes and blending while painting popsicles. Phillip and Everett traded some Pokemon cards with Sister Smith! Justin and I got to sneak out to watch the newest Star Wars movie, Solo. It was good but not my favorite. For me the new Avengers movie was 10 times better.

I did not get much of a chance to paint on Friday, Amelia joined me for a painting session Saturday afternoon. I love how relaxing it feels to free paint. We all enjoyed some pool time to cool off a bit. The kids think I'm a hanging post, obligated to hang off me at every moment. We played a few games including chicken. Our Primary organized a service project with "Feed My Starving Children" for the senior kids. We met at the church at 4 pm the headed over to the project center. We had an orientation to explain what the project is all about and our duties. We looked fabulous in our hairnets. Our mission for the next hour was to fill as many boxes as possible with a rice-based meal mix. Each bag contained enough food for 6 child meals. We carefully washed up then were divided into groups of 15 per station. Each person had a duty: 2 scoopers of vitamin powder and dried veggies; 2 scoopers of soy and of rice; 3 baggers, 4 weighers (each package had to weigh 380-400 grams), two sealers, and 2 boxers. We got to yell out our progress as each box was filled. Our station filled almost 14 boxes. I heard the top group boxed 24 boxes! I was amazed at the variety of people volunteering ranging from church groups, to a motorcycle gang, to refugees. While we worked the facility blasted fun music to sing and dance along to. The work was so fun! All the food we packaged was immediately crated and set out for delivery to El Salvador. Before we left folks were allowed to pray over the food as a group. Amelia volunteered to lead a prayer for us all! I was not expecting her to volunteer but grateful she did! We plan on going back soon as a family. If you go on your birthday the center will donate a fun shirt as a gift. It was hard for the kids to imagine eating the rice-soy meal for every meal all the time.