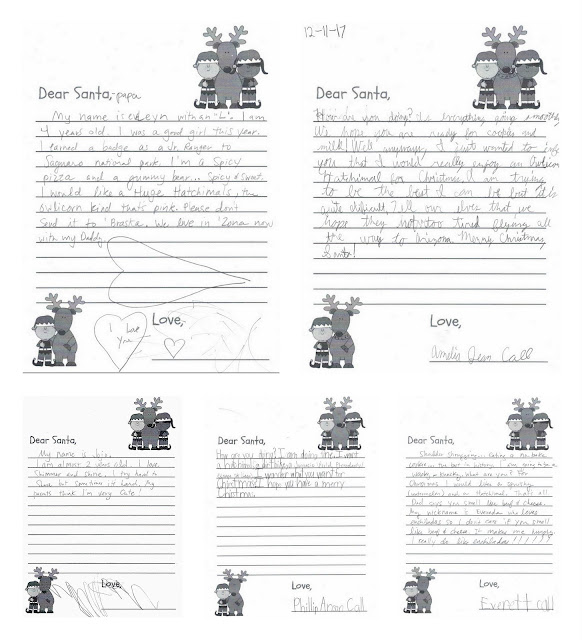 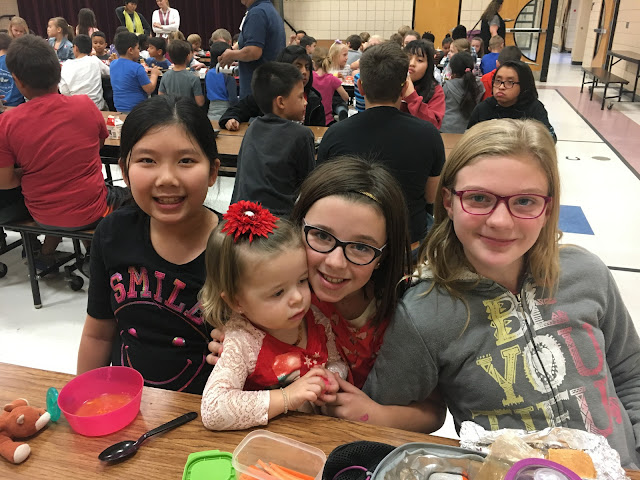 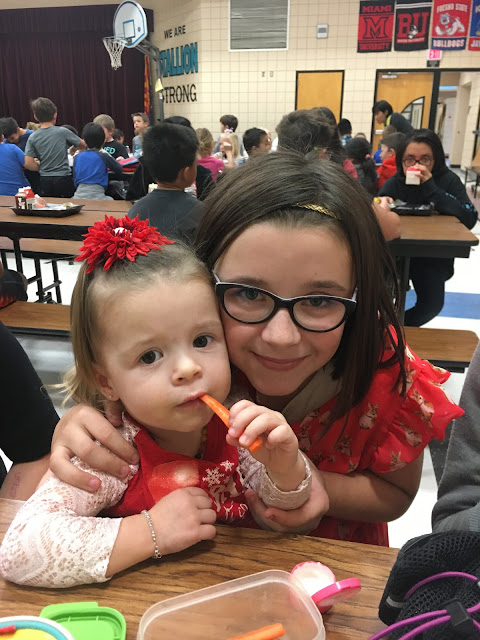 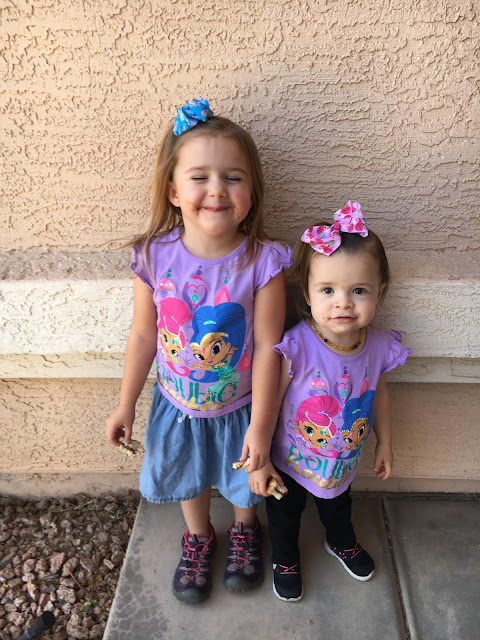 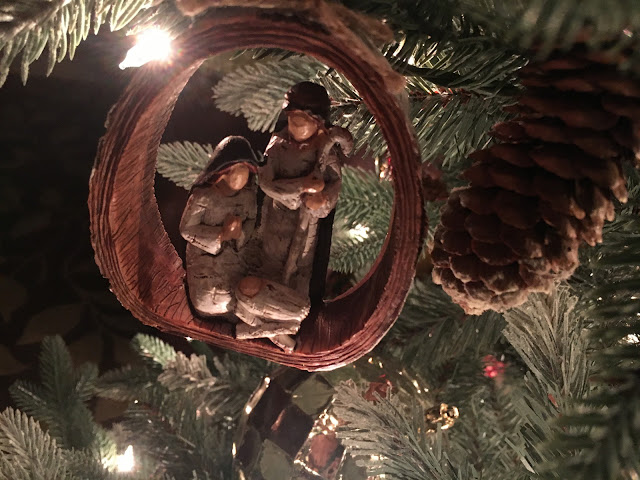 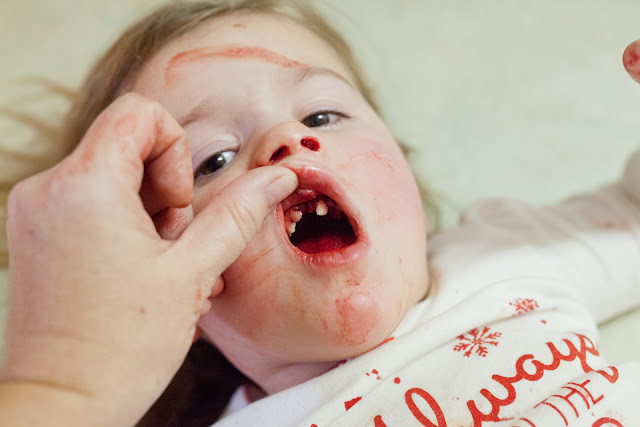 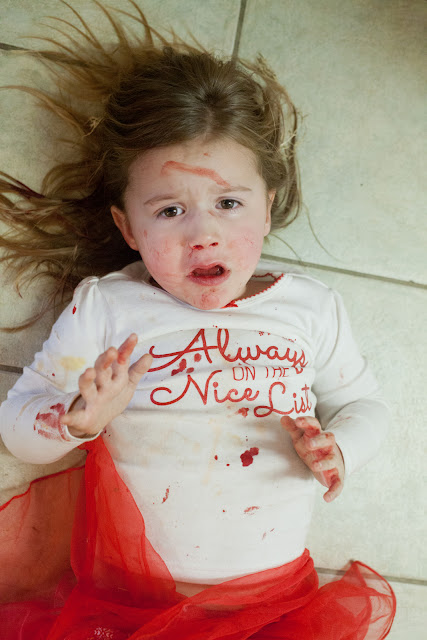 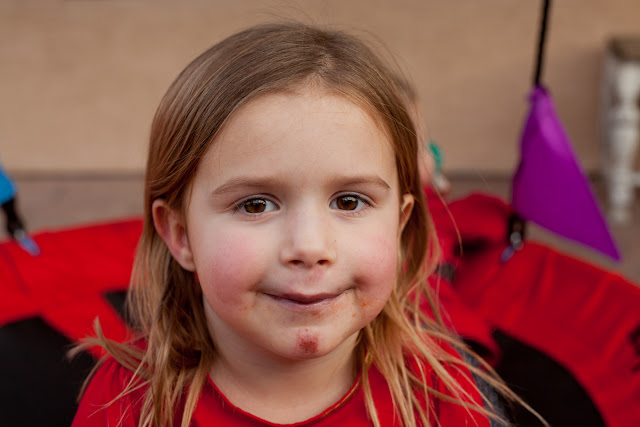 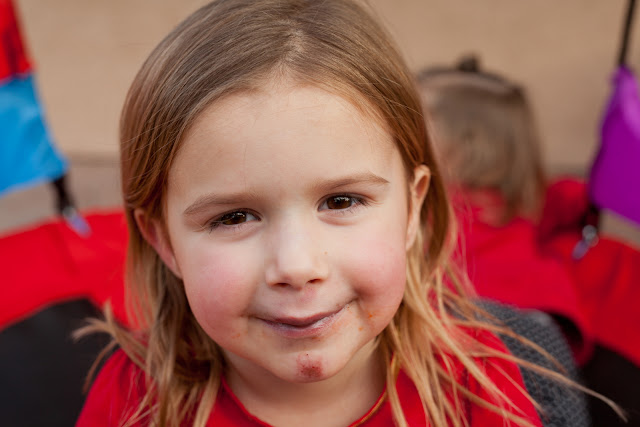 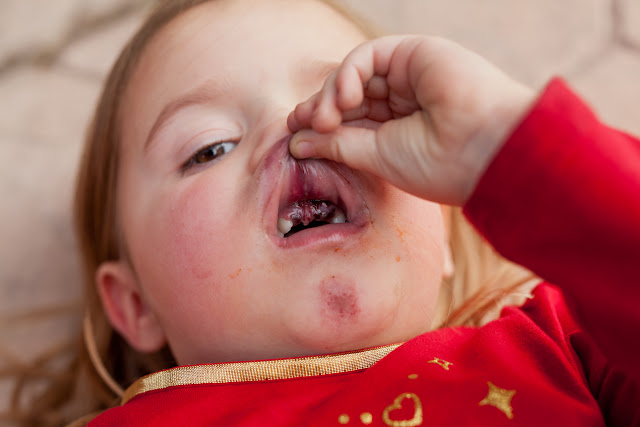 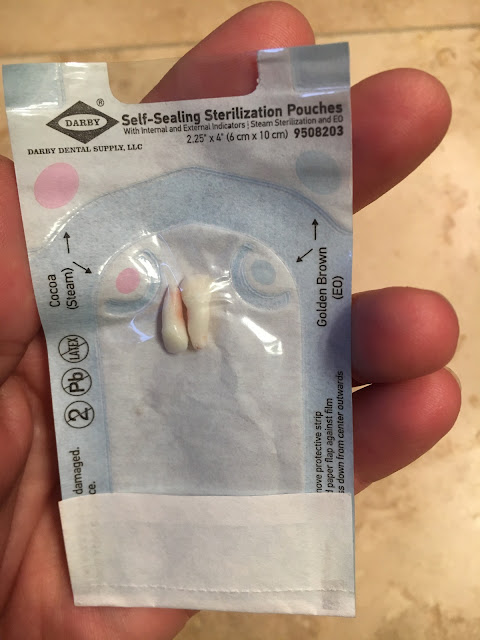 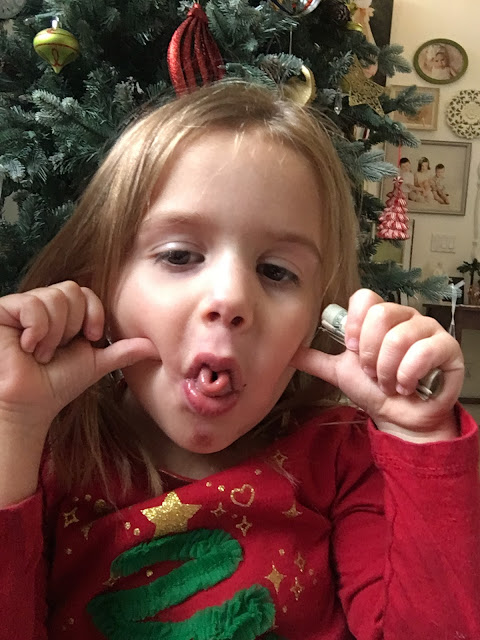 Evelyn will be wishing for her three front teeth for many years to come. Not how I envisioned a toothless kid! Story to come in a bit.

Last week was a bit of a boring one. The house closing is postponed until the end of December due to more financing issues with the purchasers. Justin was quite upset. Our FHE this week consisted of watching the First Presidency Christmas Program. We missed the broadcast so took the chance to watch it. Seems our Nelf team made an appearance and dropped off some treats for the kids to enjoy. We love our Nelfs, much better than those sneaky Elves on Shelves. Our team of Elves have Army training in reconnaissance and childhood drama survival. Since moving to AZ the Elves appear to prefer ringing the doorbell and not using the Christmas bell. Our activity was to write letters to Santa. I mailed the letters of the next day! We hope Santa writes back like he did last year.

Tuesday Amelia had me bring Josie in to her class for Show and Tell. Since Evelyn was also there she got some Show and Tell attention as well. Amelia answered lots of questions, most centered around feelings of annoyance and siblings. Josie brought in her favorite toys from Shimmer and Shine to show off. I finally got a good look a Mr Lars, the boy who now broke Amelia's heart (phew). He is handsome! I brought along lunch for us to enjoy with Amelia after her classroom event. Everett never even noticed us after several attempts to catch his attention. Phillip noticed me right away. Evelyn and Josie ate Princess soup for lunch. Amelia's friends, Chloe and Abby kept us company.

Phillip completed all his spelling homework on the bus for the entire week! We only had to work on reading his assigned books after school. That was ever so nice not to fight over homework for a few days. Way to go!

After school on Friday, Amelia was pushing Evelyn and Josie on the swings while I watered the plants and trees. She happened to push Evelyn's swing at the same exact moment Evelyn was trying to stand up. Gravity worked again poor Evelyn. She face planted right onto the concrete patio, tore out one tooth, scraped her gums and chin up, bloodied her nose, and almost fainted. Poor kiddo was a bloody mess. Amelia immediately freaked out and blamed herself for the entire incident. I had Phillip run to get the Goddard's for assistance. Evelyn laid on the grass until her nose bleed subsided. Once I peeked in her mouth I knew it was a lost cause. We both had blood streaked over our clothes before too long. Her right front tooth was almost completely pulled out, the other teeth looked intact. I sent the boys out to search the lawn and patio for her other tooth. Eventually I decided she probably swallowed her left front tooth. Debbie came over and called her Son-in-law who is a dentist. Lucky, right? He advised us to get her immediate help, extraction of the right tooth, and x-rays. I called up pediatric dentists close by, the closest office was still open at 4:30 and got us in immediately. We worked out insurance stuff on the drive down. Debbie stayed with the kids until Justin got home. Evelyn sat still through 3 x-rays. She was stoked to get 2 stickers for her courage. She was not happy to visit the dentist and sit in the chair. After more paperwork she was in a private office with laughing gas vented through her nose. Not sure that helped much because she still cried and almost thrashed. The worst was after the dentist numbed the surface and injected her gums with the needle. She screamed and screamed through that. He used a "popcorn" device to force her jaws open during one open-mouthed scream! The x-rays showed her right lateral incisor was no longer attached and grinding against her adult tooth. The dentist pulled out her central and lateral incisors with two quick twists and pulls. Disgusting to watch the teeth extracted leaving bloody gaps in her mouth. He then cleaned out her gums, pulling debris from them. A visual peek at her upper lip showed a nasty surface gash, worthy of a stitch or two. He decided against stitches since it would rub her sore gums.   After that she calmed down quickly and declared she hates dentist chairs. The best part was earning TWO prizes from the prize case. We walked out an hour later with a medical packet of teeth and mouth bandaids. We drove straight to CVS to get an antibiotic filled to prevent a mouth infection. She was happy to get popsicles for dinner. Evelyn was in a world of hurt the next day trying to eat, aka gnaw food with her cuspid teeth. I was quite amazed at the lack of emotion I showed. Calm as the proverbial cucumber on the outside, storm raging inside! Amelia was wracked with guilt. She wrote the tooth fairy a note: Dear Tooth Fairy, please give Evelyn something amazing and worth the loss of three teeth. I also got a note and $20: Mom, please use this money to pay the bills, don't give it back. Justin had a good chat with her about culpability and accidents. That could've happened to anyone, even the mom.

Saturday we took it easy. Evelyn woke up with $6 under her pillow from the tooth fairy. Lucky girl.  Mostly watching movies and cleaning up the house. Justin took the van in for some much needed repairs. The brakes were replaced and the front tires replaces again. We got new front tires earlier this year for the van. The store probably used old, weather worn tires, causing many issues with steering and rough ride. Those repairs cost us a chunk of change. When it rains...

I found a front bike seat for Josie on a For Sale page for $10! They usually go for $20-40 a seat. The seat I scored was in mint condition and perfect for my bike. We biked around for some time right before dinner. The Christensen's hosted a fun South American Christmas party. I made refried beans using my pressure cooker. They had old Christmas movies playing outside, lots of yummy food, and new folks to meet. The kids wrote letters to Santa then tied the letters to helium filled balloons. The kids congregated on the front lawn with all their white balloons!  They let go of their balloons at the same time. It was quite a sight to watch all the balloons float away. How fun!

Sunday choir practice was long and arduous. We practiced the program three times in a row. Once at the church. Phillip stayed home while Josie napped, thankfully, she napped longer than usual. The Chandler Calls came over for dinner. I made pulled pork sandwiches with tomato salsa. Laura brought a salad. After dinner we fried up donuts to take to our neighbors. This time we sang Christmas carols as we delivered the goodies! So much fun to sing and make memories with our cousins. I think we sounded amazing! Walking down the streets we sounded like a menagerie let loose. Phillip was so excited he started ringing doorbells of folks we don't know (yet).

Justin and I are remaining strong with our "Keto" diet so far. It's hard to avoid the carbs! Especially donut carbs. I finally feel more motivated as I dropped 7 pounds after 3 weeks. Yay. My brother Jeff moved into my parent's house this week. He was close to living in his truck during a Utah winter. I'm glad he is motivated to get some help from the VA, counseling and maybe medication. Jana miscarried another baby this week. It was so hard to hear about her suffering and anguish over losing another baby in one year. Stay strong! Jeremy also had kidney stones around the same time. Seems like this was the week of bodily harm. Let it be written...let it be renamed.