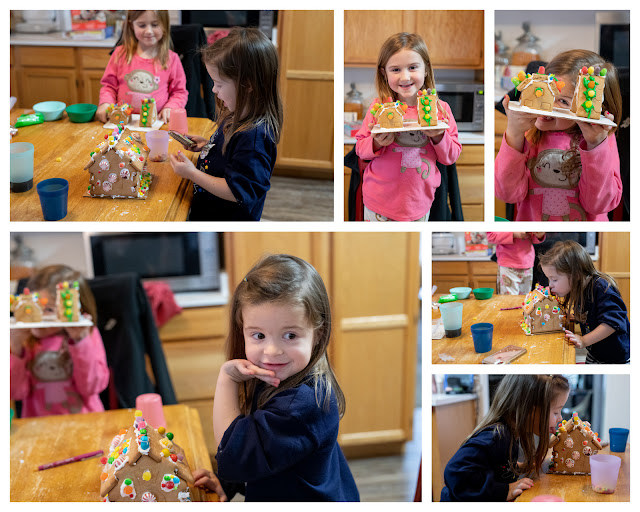 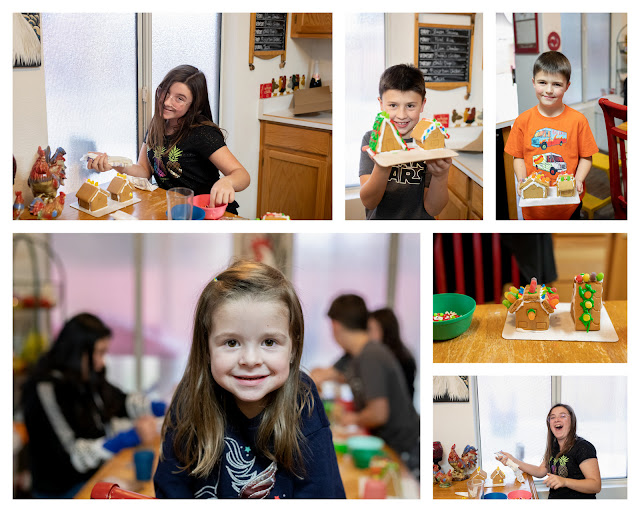 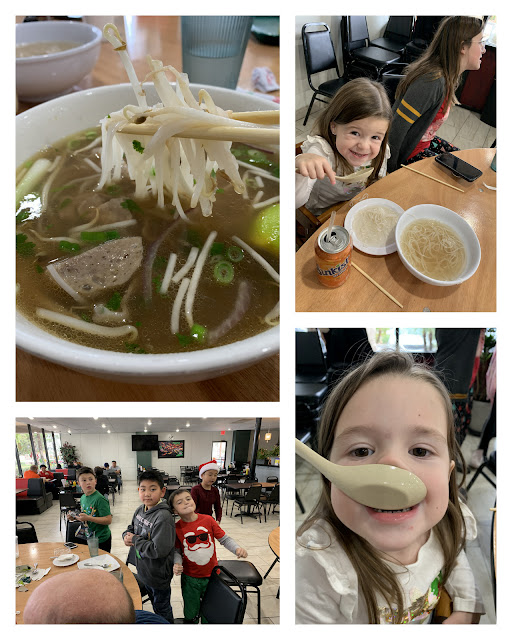 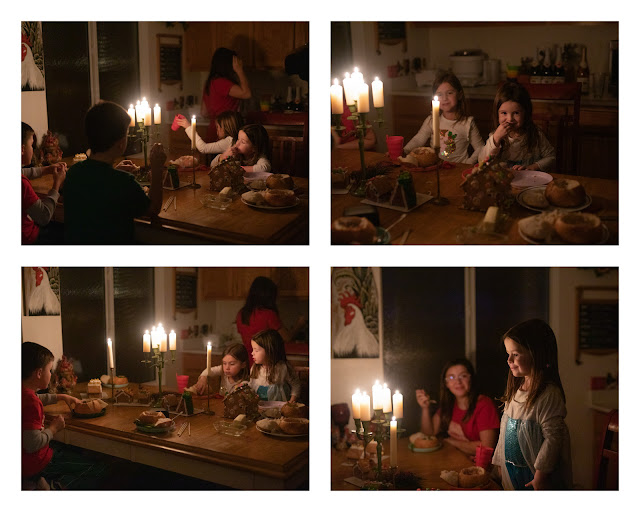 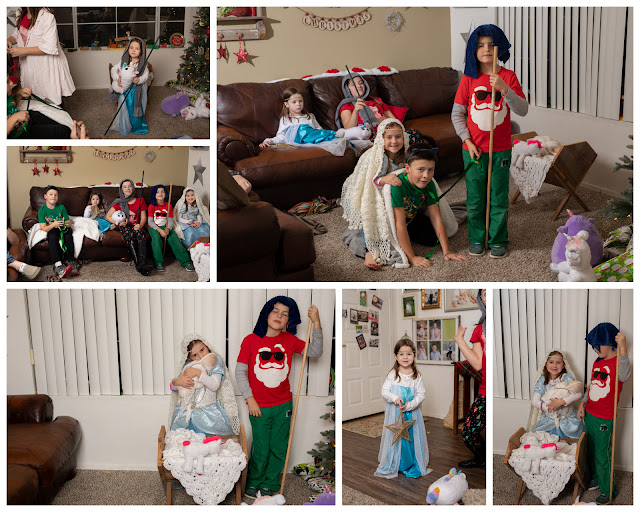 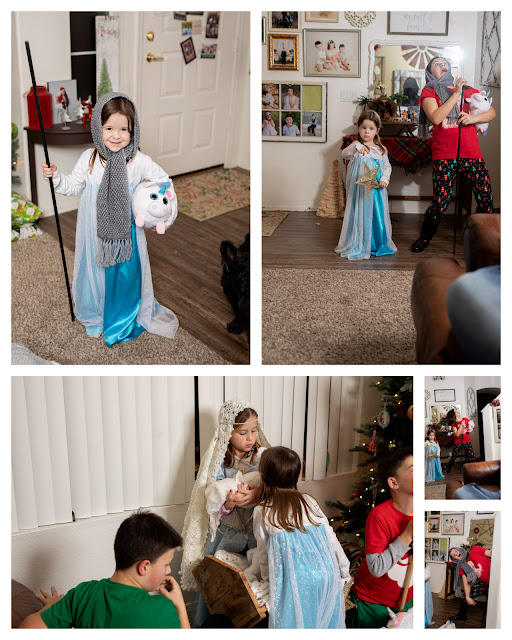 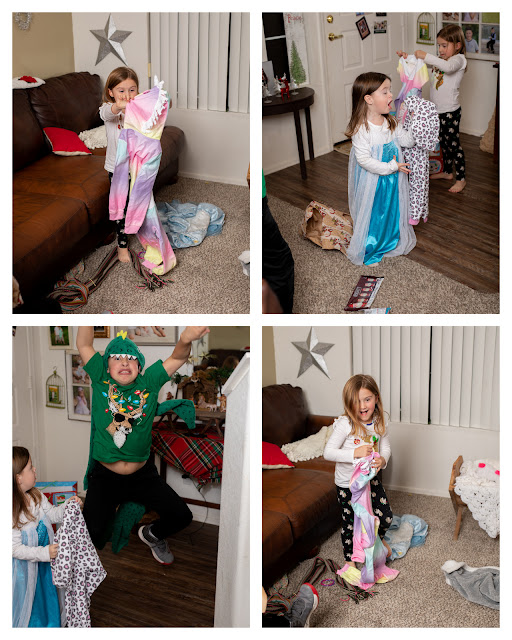 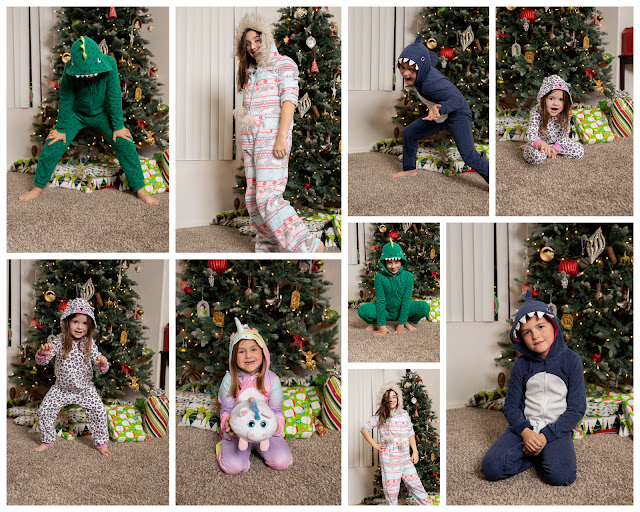 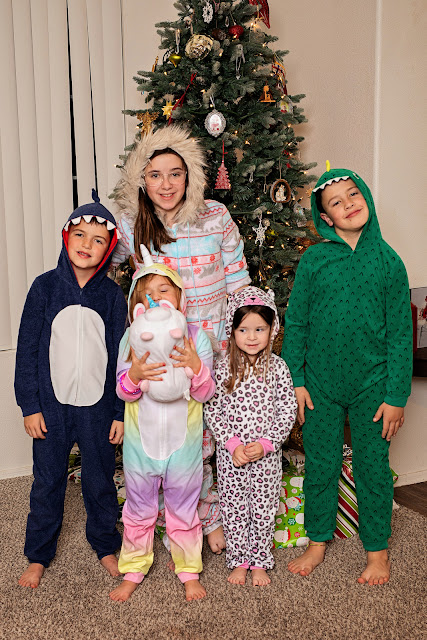 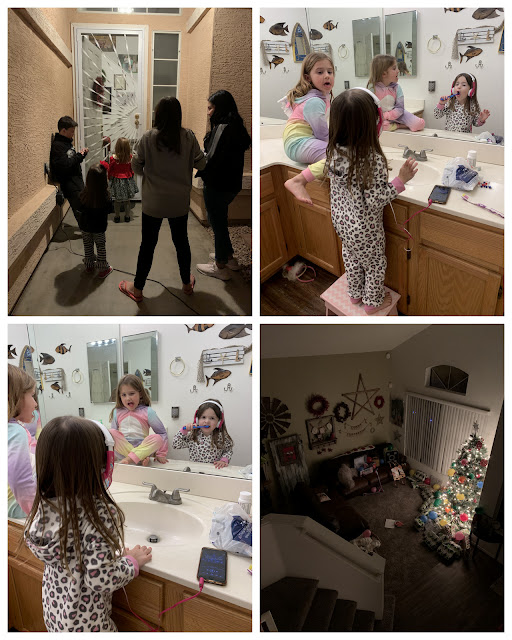 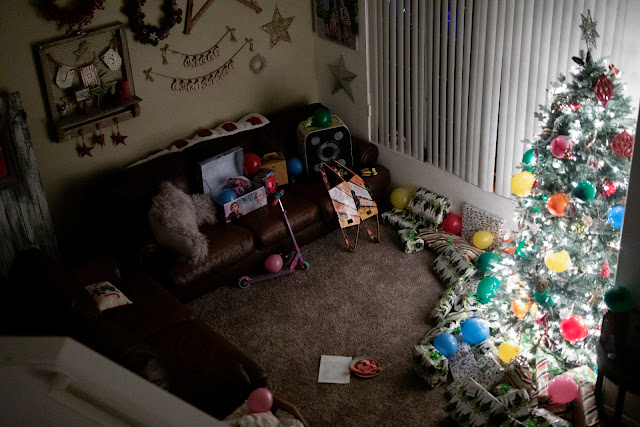 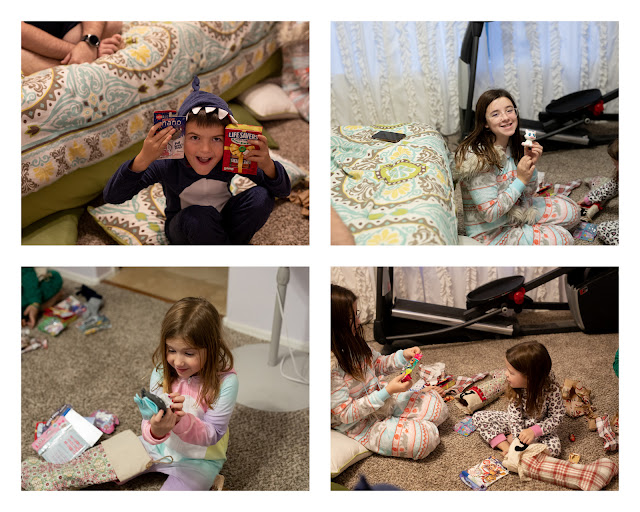 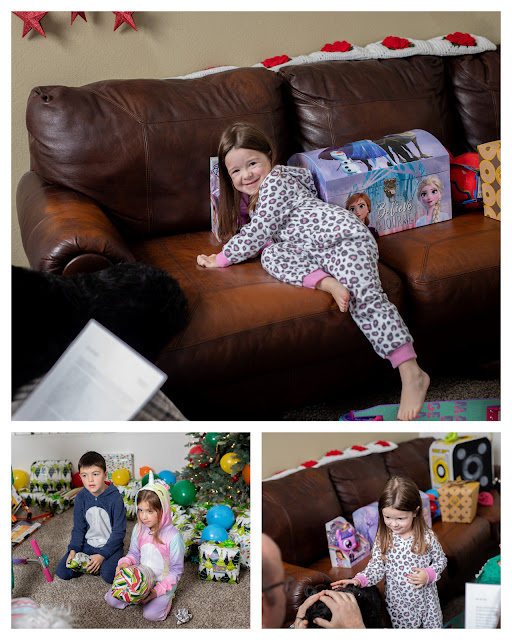 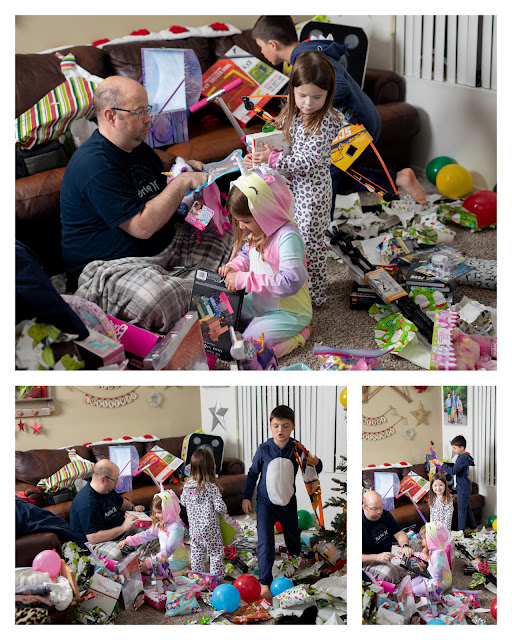 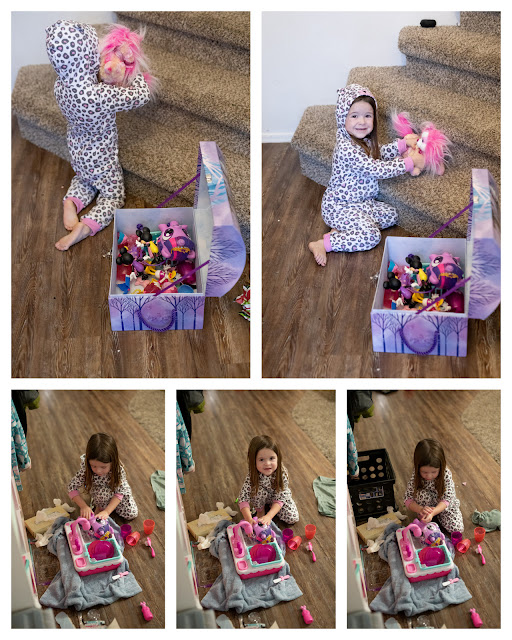 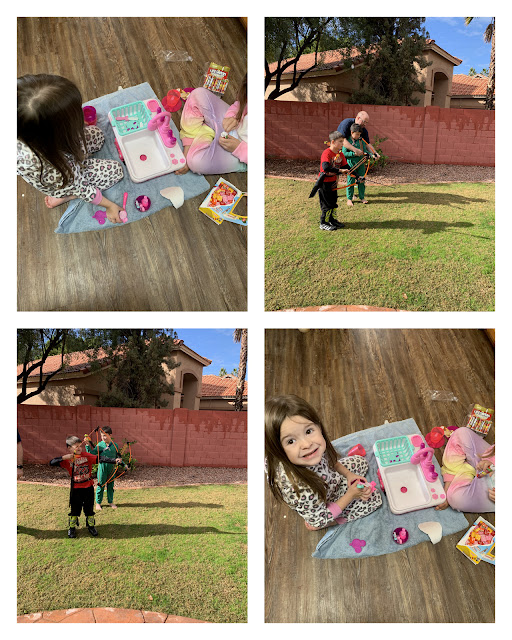 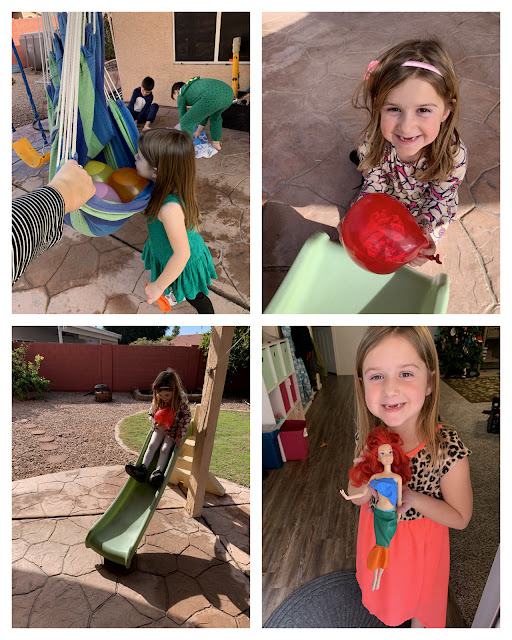 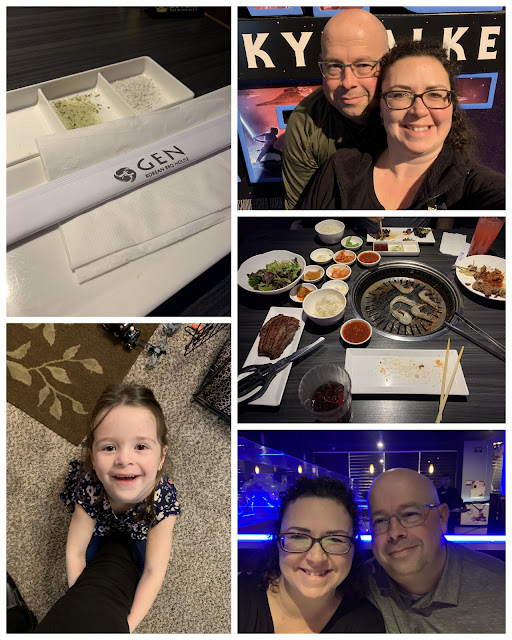 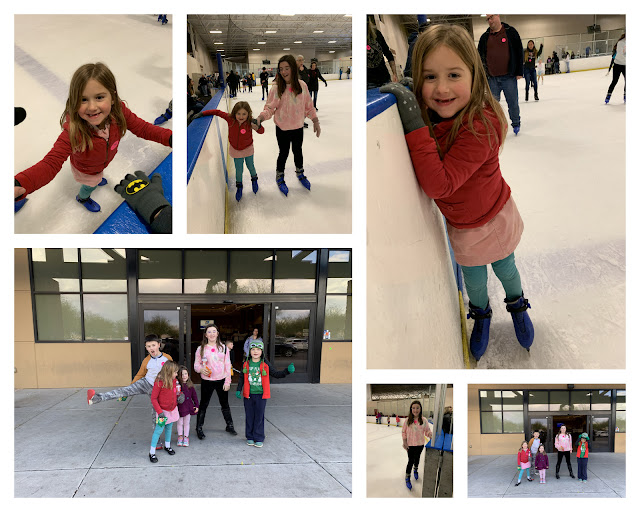 I like Christmas on Wednesdays! The kids had a couple days off of school before Christmas to enjoy more Christmas fun. We had Chloe and Ronald over on Monday for the day. I did a bit of grocery shopping and picked up another gingerbread house for Chloe and Ronald. The kids quite enjoyed decorating, frosting, and of course eating candy. Amelia helped Josie assemble a Paw Patrol house. The other three kids had 2 mini house each to decorate. The hardest part was waiting for me to assemble the house with the ONE tube of frosting we had. The kids later had Jacob over for a good chunk of time and played outside for a glorious amount of time. I worked on more wrapping when I could grab a chance.

Christmas Eve we started the day as lazy bums. Our crazy Nelves got Disney+ for the kids, hmmmm, how did that happen? Thus I lost my family for a week until they finished watching the Mandalorian series. Baby Yoda is the cutest ever. Amanda treated our family for lunch at a Vietnamese Pho restaurant. Amelia was not feeling well at all, poor kid did not eat anything. We gave Chloe and Ronald their Christmas gifts: a matching "Chloe" (aka a hoodie) with Amelia and a Beyblade set. It was a rainy day and quite dreary outside. Perfect day for a nap. Apparently, Justin and Evelyn sneaked out to Walmart to update my stocking with kafume and white chocolate. Amelia helped me wrap some last minute items. I whipped up my favorite Santa cookies: white chocolate cherry shortbread and soft gingerbread cookies. The favorite part of the day finally came, the time to make clam chowder. As a family we look forward to magical clam chowder all year. It tastes completely different on Christmas Eve! Justin helped fry bacon, Amelia set the table, and I made the soup. The other kids worked on finding costumes for our Nativity play. We ate our delectable meal by intimate candlelight. Martinelli's paired well with our meal, ha ha. Evelyn decided that clam chowder is much better without the clams. Josie ate her customary two sniffs and wandered away. I had to laugh when I saw what the kids had gathered for props and costumes. The sheep this year was a herd of unicorns. Josie was an angel and a unicorn shepherd. Phillip gagged because of the satin ribbon tied around his neck. He opened the front door to get some fresh air, I locked it so he would not open it. Stinker discovered a little Nelf surprise but he did not say anything just quickly slammed the door with wide eyes. Josie was crying because she wanted to play. The kids wandered away after our nativity to check on Santa's progress on NORAD's Santa Tracker. Phillip was the first to the door once the Nelves announced Santa was coming. He was relieved the bag of surprises was still on the front porch. Soon wrapping paper was flying and kids shouting with glee over their new awesome PJs this year. Santa sent animal onesies instead of Christmas themed ones. Phillip was a dinosaur, Everett a "derpy" shark, Evelyn a unicorn, and Josie was a cheetah. Amelia got a cute comfy set that will fit her for 20 more years. We did discover a large gaping hole in a side seam so had to whip out my sewing machine to fix the hole. Josie was so cute acting like a cheetah, growling with her claws out. The kids were still wired at 9 pm so the Nelves had to ring bells saying it was time to get in bed. Phillip got a dose of Benedryl, he was up every hour last year. Mom and Dad got their stuff set up then went to bed ready for that Christmas magic.

Santa CAME! He came! The kids sprung awake at 7 am, thank you Christmas spirits, and invaded our room to open stockings. Evelyn was tickled pink that Santa put her favorite pickles in the toe of her stocking. Josie's eyes were wide open and soaking in all the chaos. Justin got beef and cheese in his stocking...a reference to the movie Elf, he sits on a throne of lies. Ha hahahahahaha, Santa has a sense of humor. I headed downstairs to get a couple things ready before the crew headed down the stairs. Josie was first, Mia last down the stairs. Josie was delighted that Santa brought her an Elsa treasure chest AND a baby pony. Evelyn got a pink scooter from Santa. Mia got a furry reading pillow. Phillip and Everett got real bows and a set of arrows. All the kids got a box of Einstein bagels! Mia found a letter from Santa next to the cookie plate. She read it while the kids enjoyed their Santa gifts. The next 30 minutes was a perfect storm of paper, boxes, tags, balloons, and toys. The kids loved their new rice hot packs, loved the fabrics I chose for them. The boys immediately engaged Justin to help them with the Bows and Arrows. Phillip was hitting bulls eyes after a few tries. Everett was aiming with his eye closest to the bow closed, after some practice he got the correct eye open and aiming down as well. We only lost a couple arrows that day. Amelia was invited to go with Chole and Ronald to Prescott for the day, she declined wanting to spend the day with us. By 8;30 am she was soooooo bored, regretted her decision to stay home. Justin bought movie tickets for himself and the boys to watch the newest Star Wars movie, Mia stayed home. She bugged me until I finally helped her with a project sewing up scrunchies. We had tamales, beans, and rice for dinner. I made a new sauce this year of a spicy homemade cheese sauce, it was divine over the tamales. Josie and Evelyn were so cute playing with their new toys all day. I found Josie inside her treasure box more than once with her toys stuffed inside as well. Evelyn and I played Barbie cake shop.

Thursday Justin and I celebrated our 15th wedding anniversary a few days early. I hired the Boyd's to stay with our kids overnight. Justin and I left at 3:30 for Tempe Marketplace Mall. We walked around for an hour or so, tried on Jeans at the Buckle. We enjoyed a lovely dinner at Gen Korean BBQ. Each table has an inlaid grill, the server brings out whatever meats you order, you grill them at your table. We also got a large platter of condiments and rice to deck out our meat. The Bulgogi was out of this world, the shrimp was meh, and the steaks quite delicious. We watched Star Wars (again for Justin). Ate really expensive, mediocre ice cream at Cold Stone. We drove in a half circle to stay in a hotel just 4 miles from home! That made me laugh. Our bed this time was not as comfy as the resort, we were up before 9 am. For breakfast we tried the Henhouse, a local favorite. That was a phenomenal breakfast! The Boyd's got off easy, we were back home by 11 am instead of 1 pm. I'm happy we got a night away, wishing it were exotic like a Caribbean cruise, but you get what you get!

Friday we cleaned up our Christmas mess in preparation for an Open House Saturday afternoon. Ronald and Chloe came over to enjoy our boredom. The kids watched way too much TV this break because we could not do much as Justin and I needed to work on house projects. I needed the mess to stay minimal. The kids were anxious to spend their Christmas money from Grandparents, we made several trips to Target and Walmart so the kids could decide. Everett was the only kid to save his money for a rainy day. Josie and Evelyn each got two new toys. Amelia got an instax camera and film. Phillip got a new Lego set. I had a sunset photo session with the Godard family. It was overcast and cruddy weather outside, cold and windy.

I had an early morning photo session with the Price family out at the Superstitions Saturday morning. It was cold and foggy. I was so worried when Bishop Price told me he wanted the mountains to look red, there was no amount of editing that will turn blue foggy mountains read. He about drove me nuts with the amount of family poses trying to get the perfect mountain shot. I ended up with 200+ photos of just the family. Came home to find the house cluttered and everyone watching TV. We had a come to Jesus moment, got our house in shape before the Open House. While our house was off-limits Amelia convinced us to try ice skating. I hurt my lower back so there was no way I was going to get on the ice. Phillip and Everett did pretty good for first timers. Everett hugged the wall until his feet went numb. Evelyn skated back and forth in front of a huddle box as I held her hand and walked her back and forth. Justin and Josie joined us after 40 minutes, Josie refused to take a short nap. Those two went to Walmart for water and a snack. I had another large family session at the Riparian. Justin and the kids drove to the library and sat in the parking lot?! At least go inside and enjoy the books for a while.

Sunday Justin was released at Ward Clerk during church. A new Music Chairman and music director were also called, but I was not yet released.