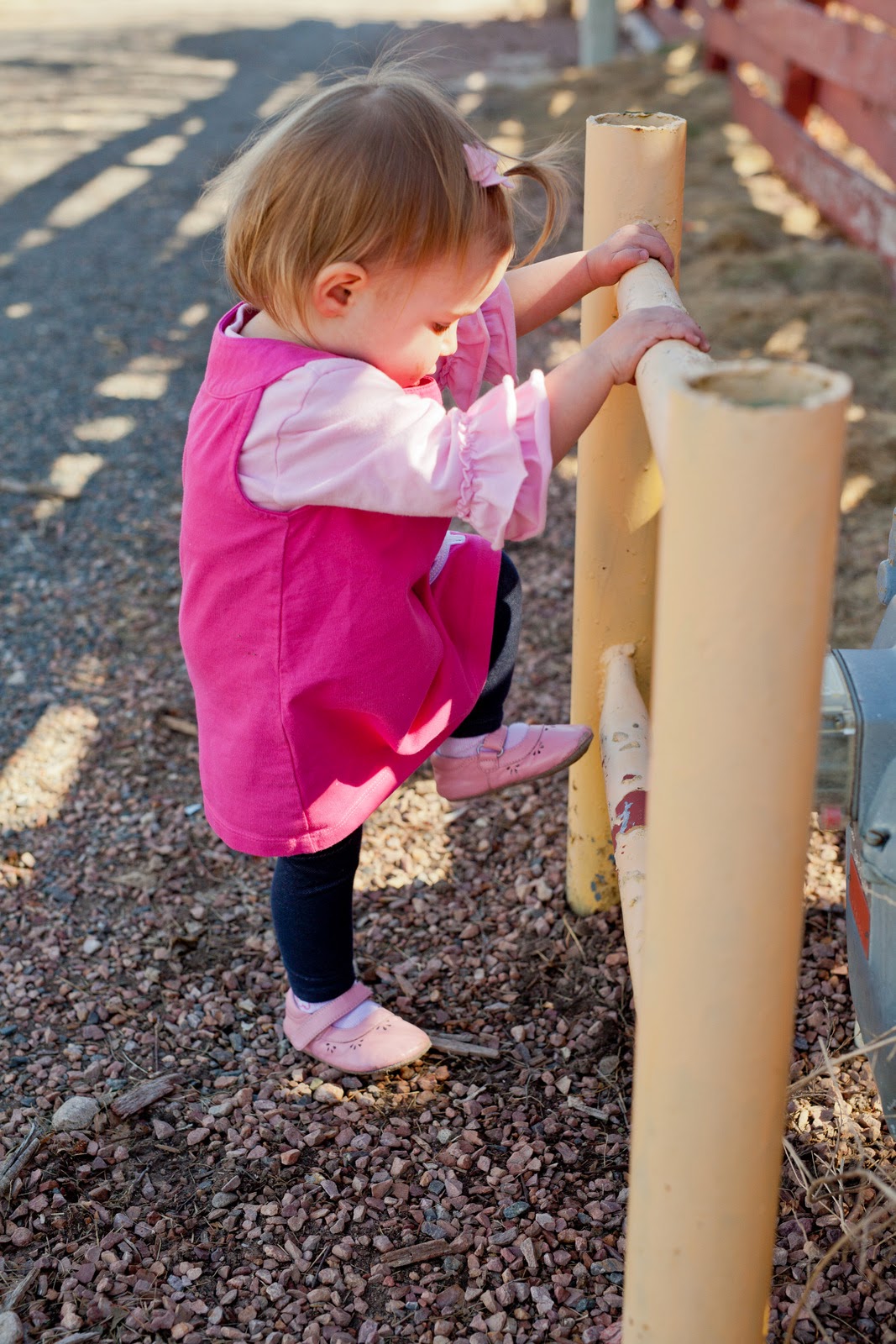 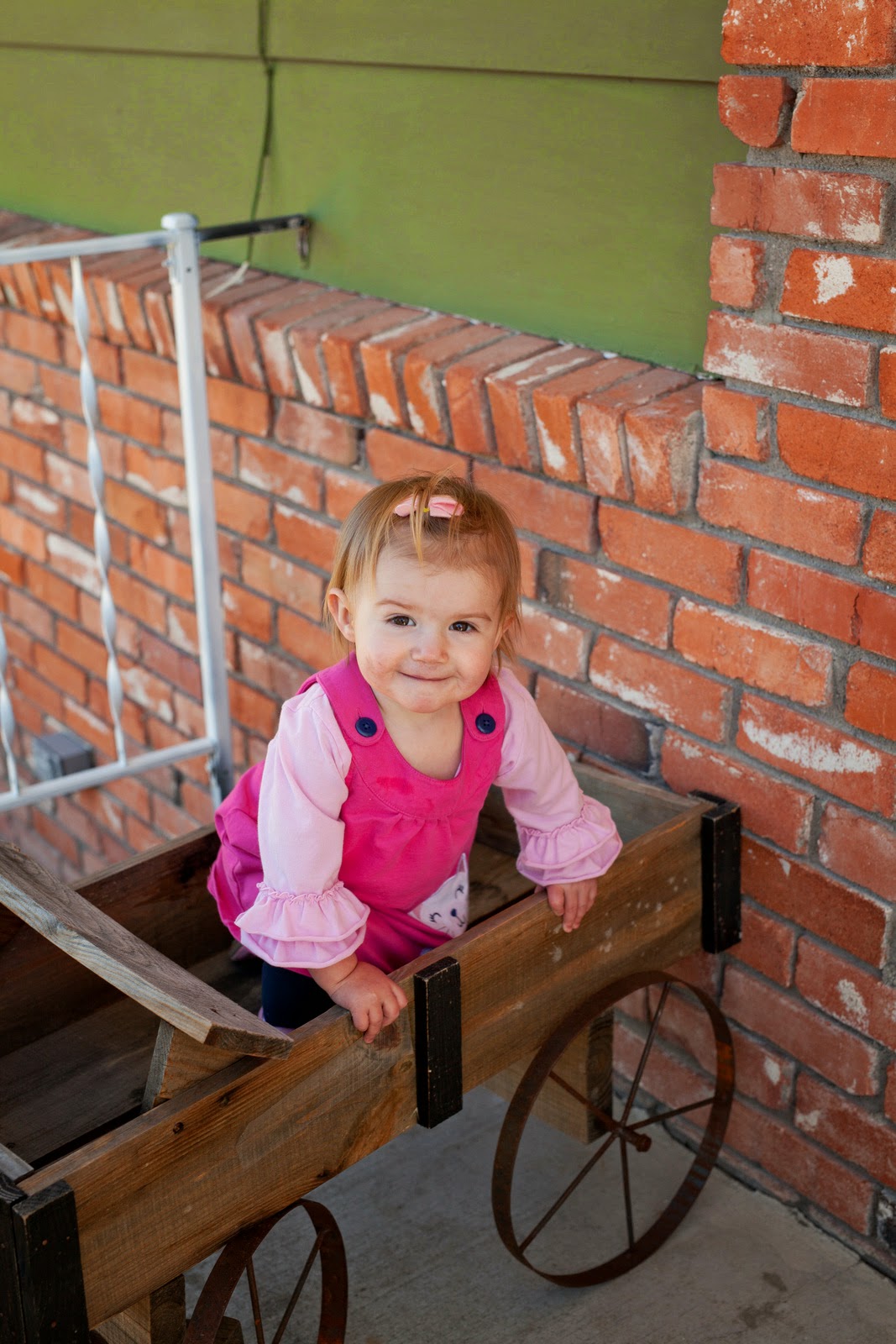 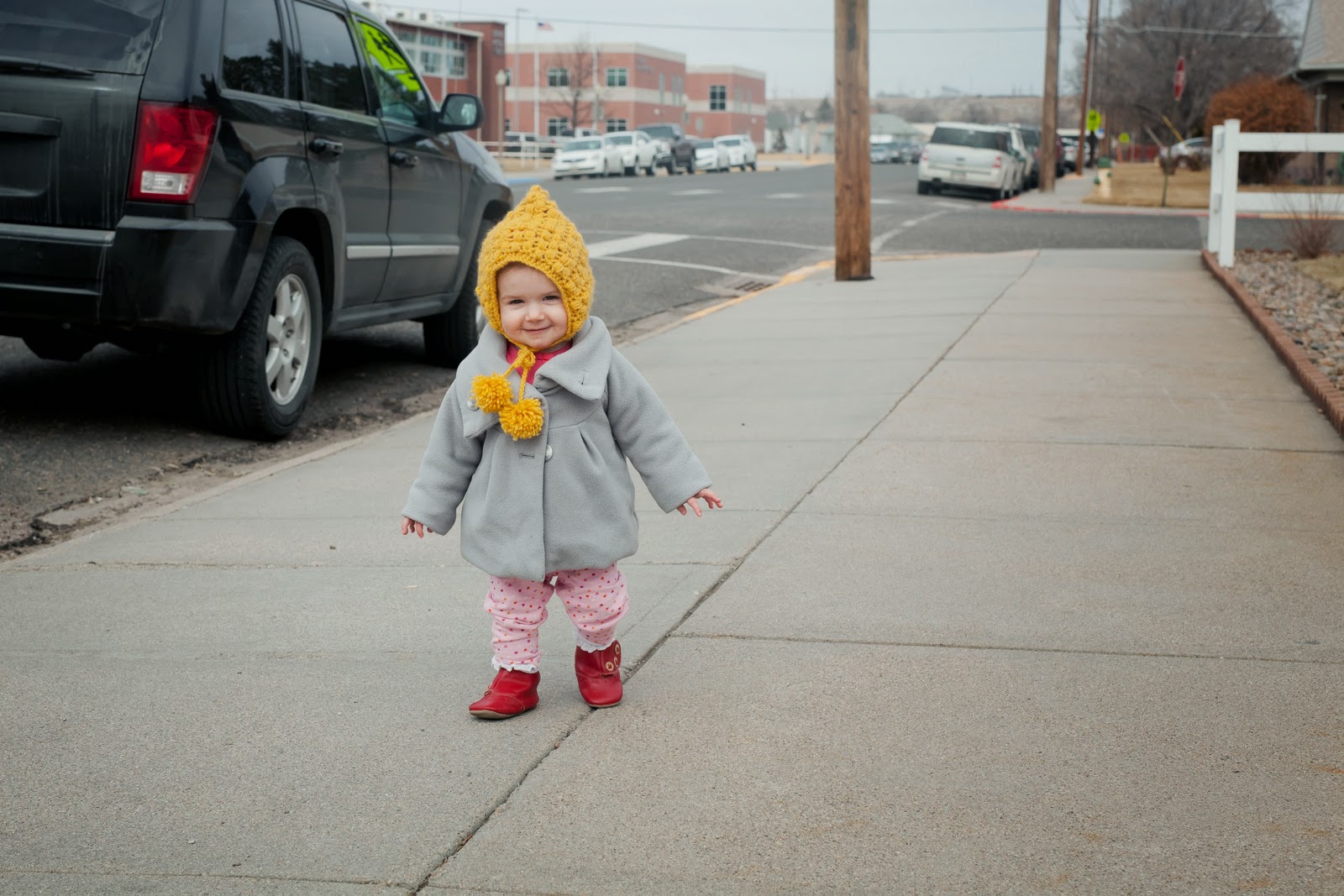 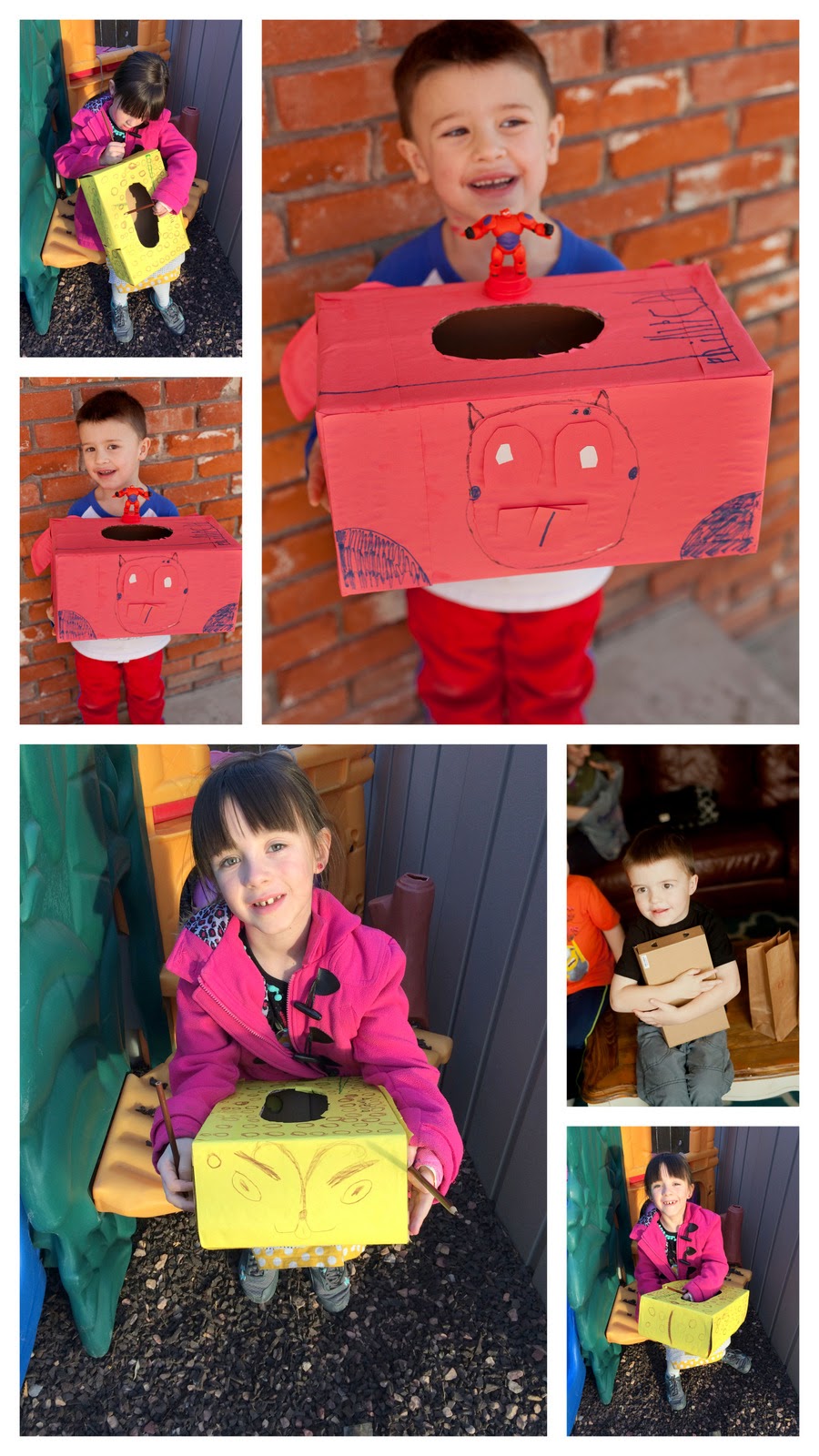 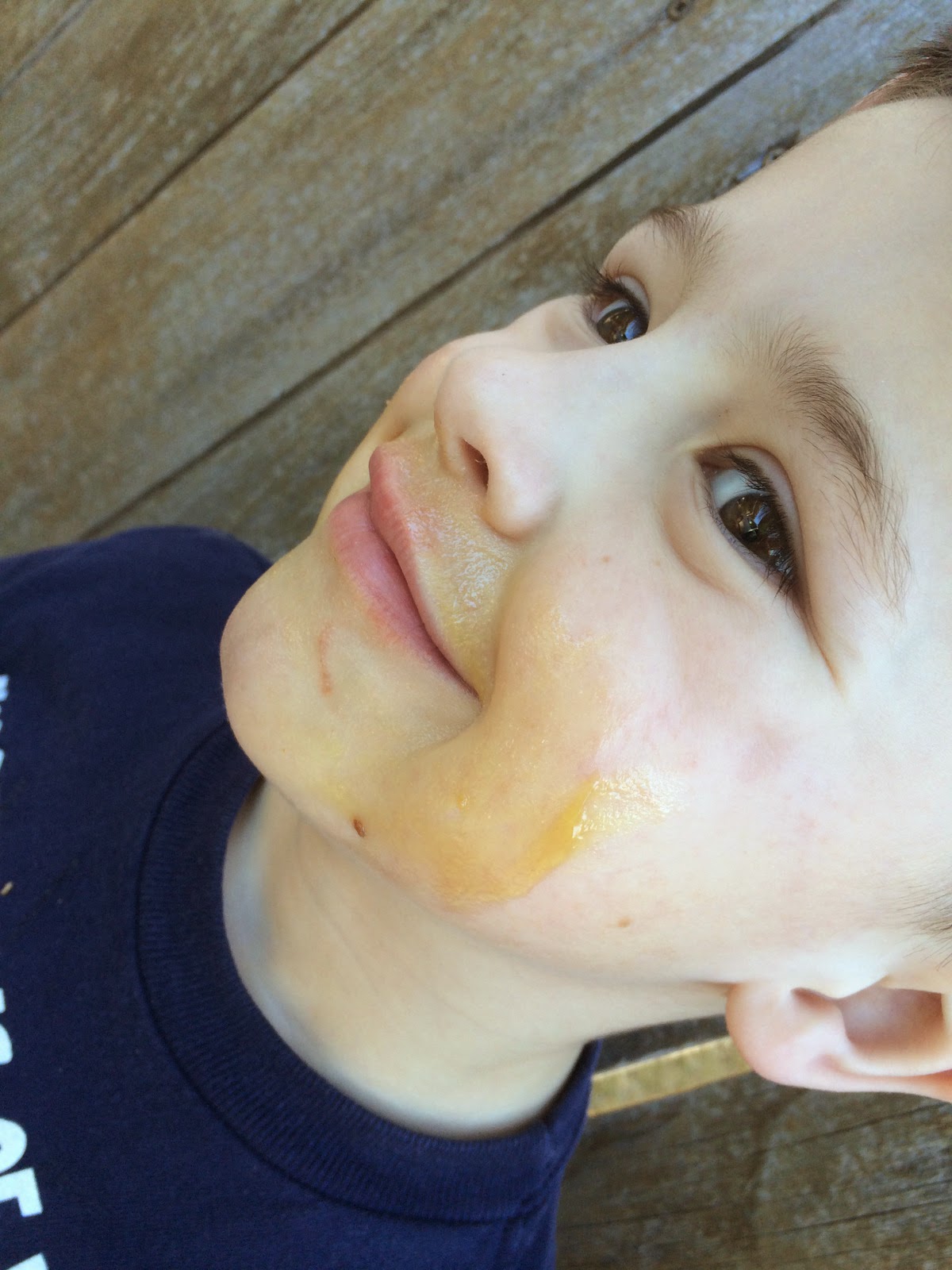 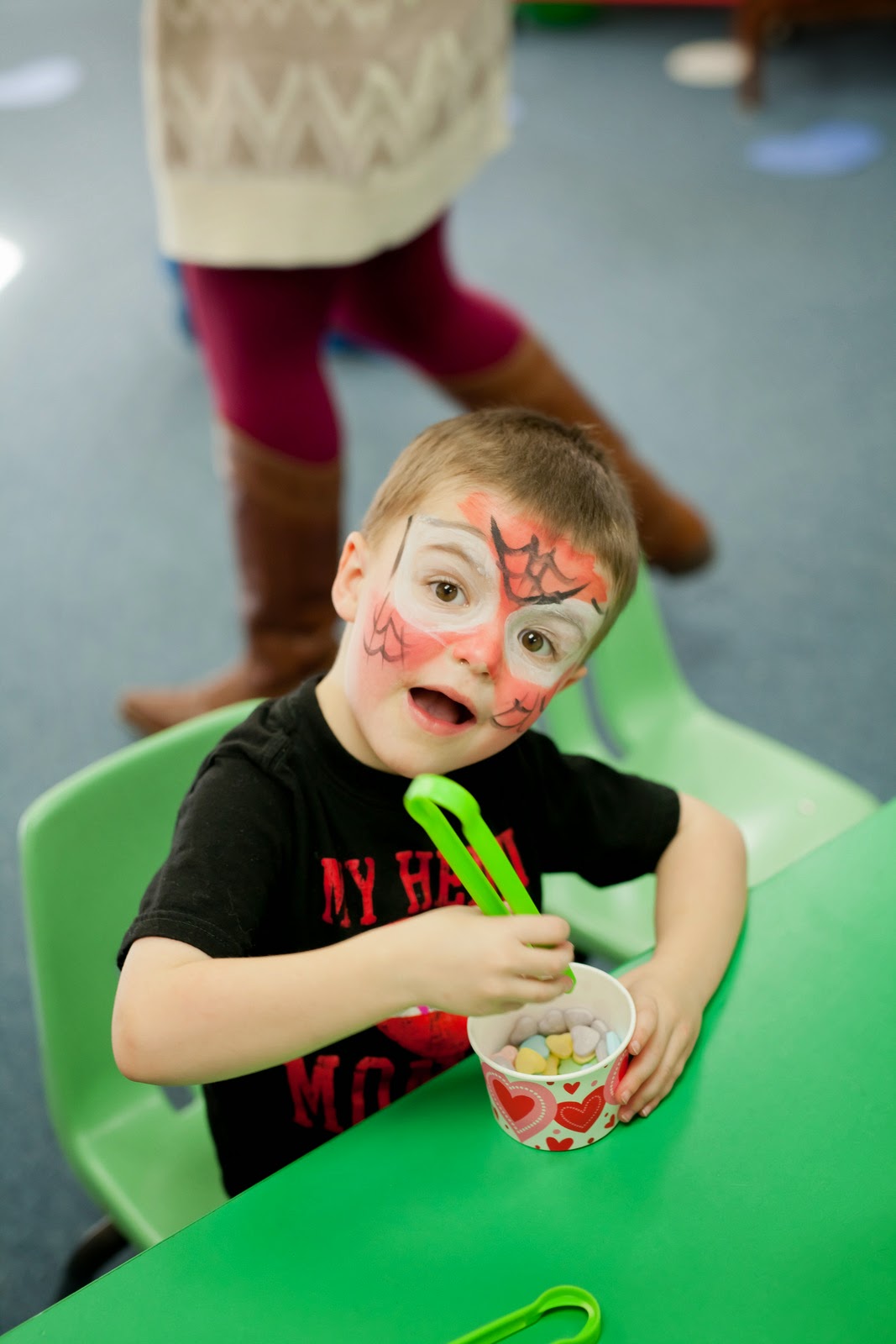 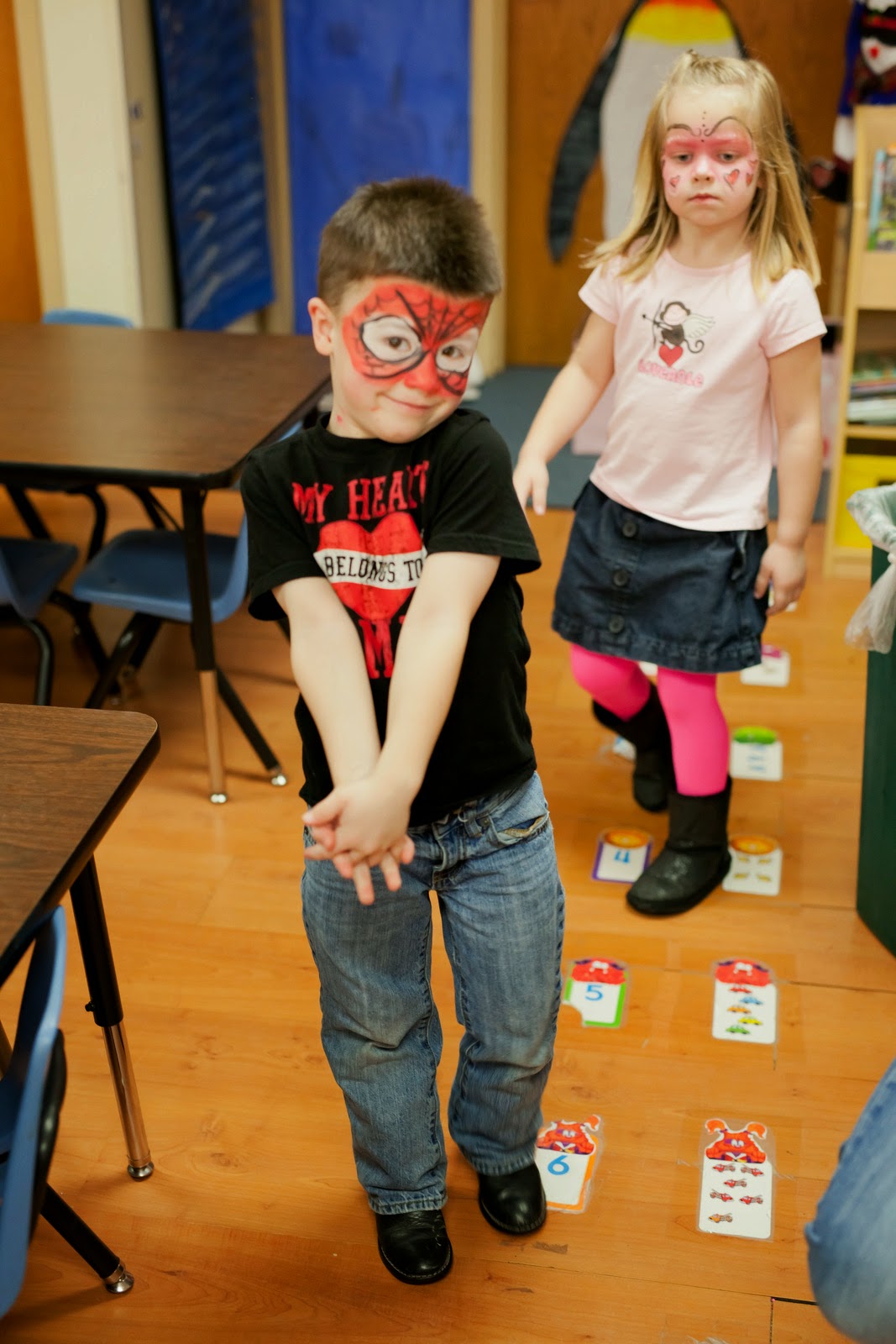 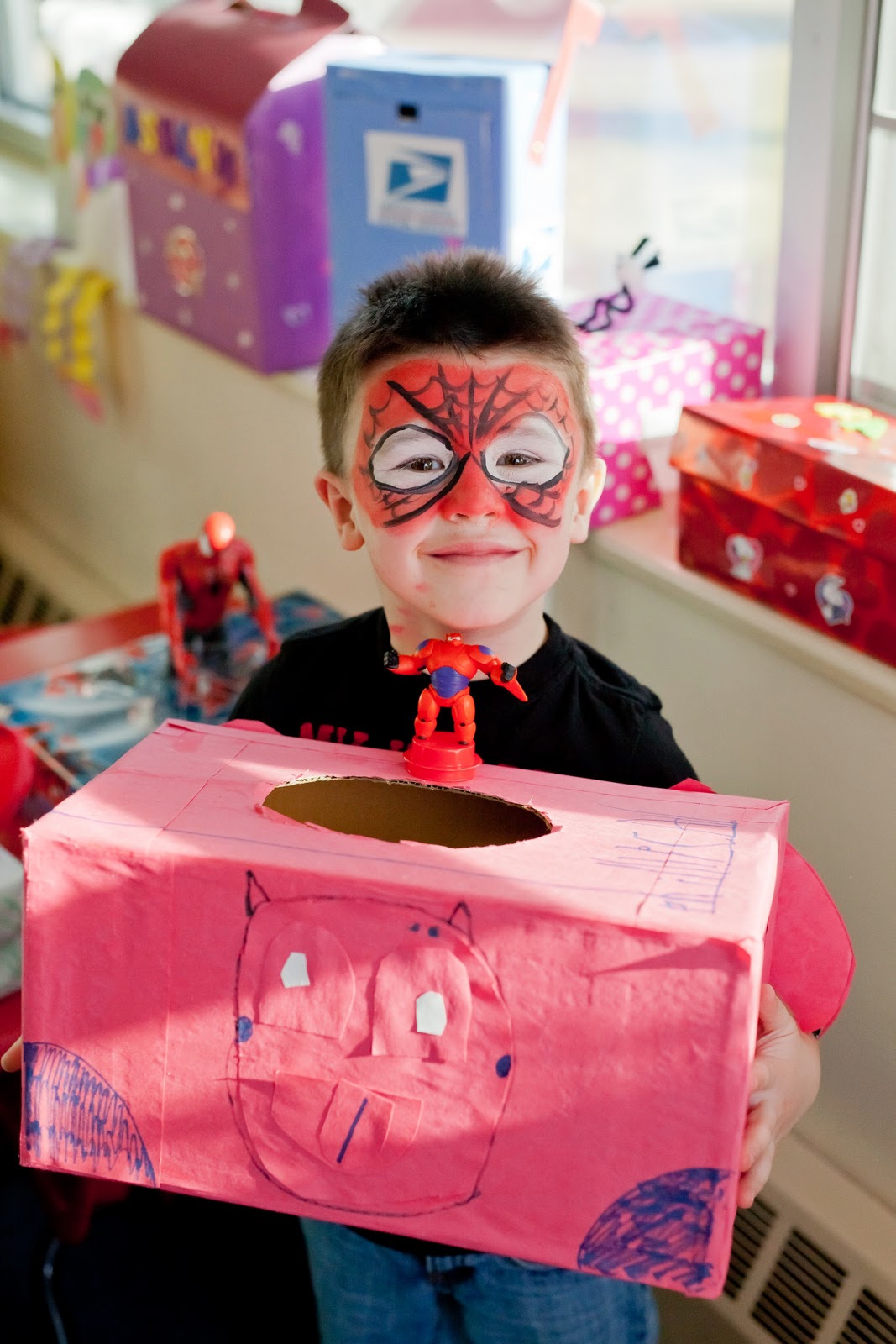 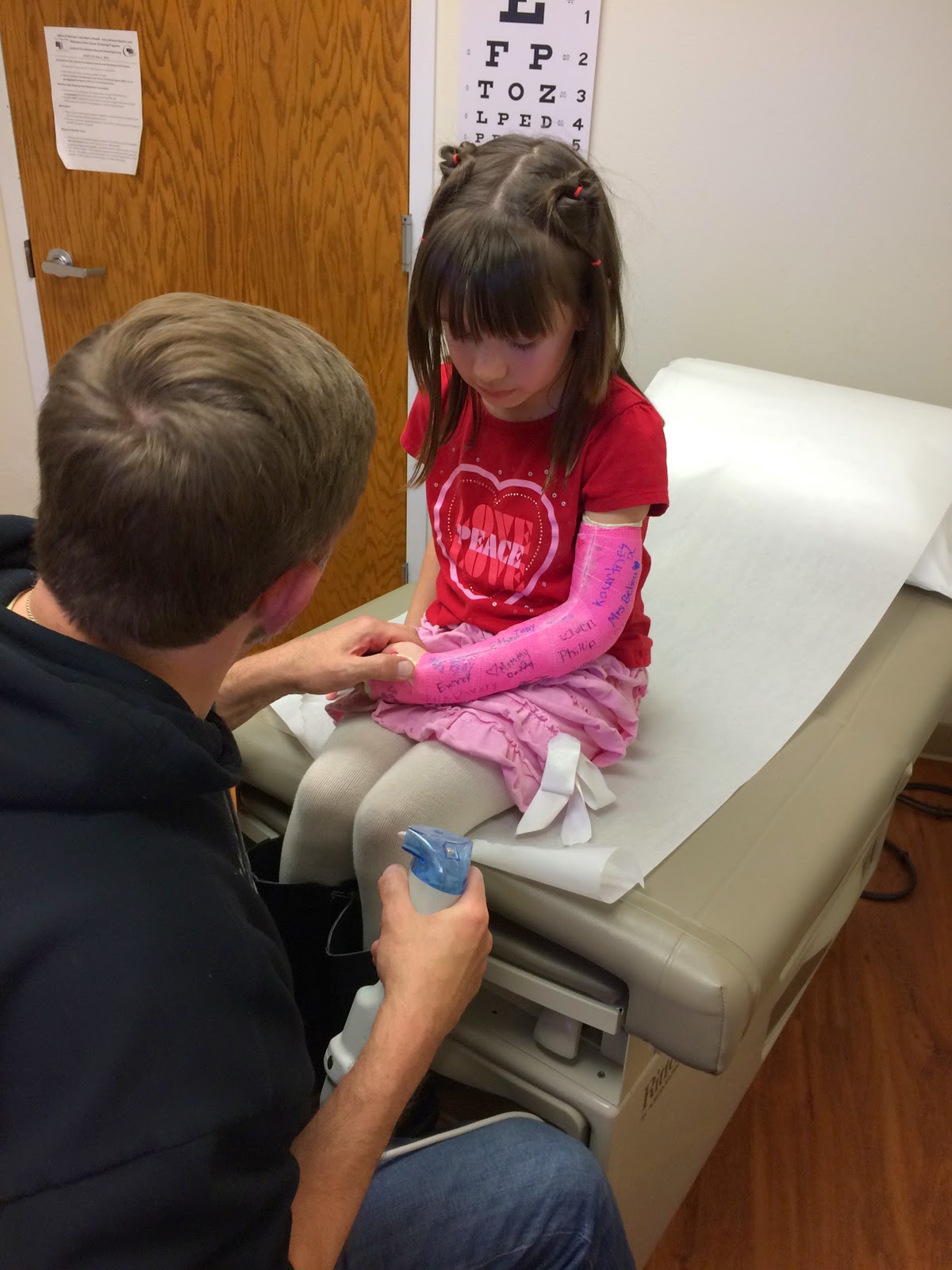 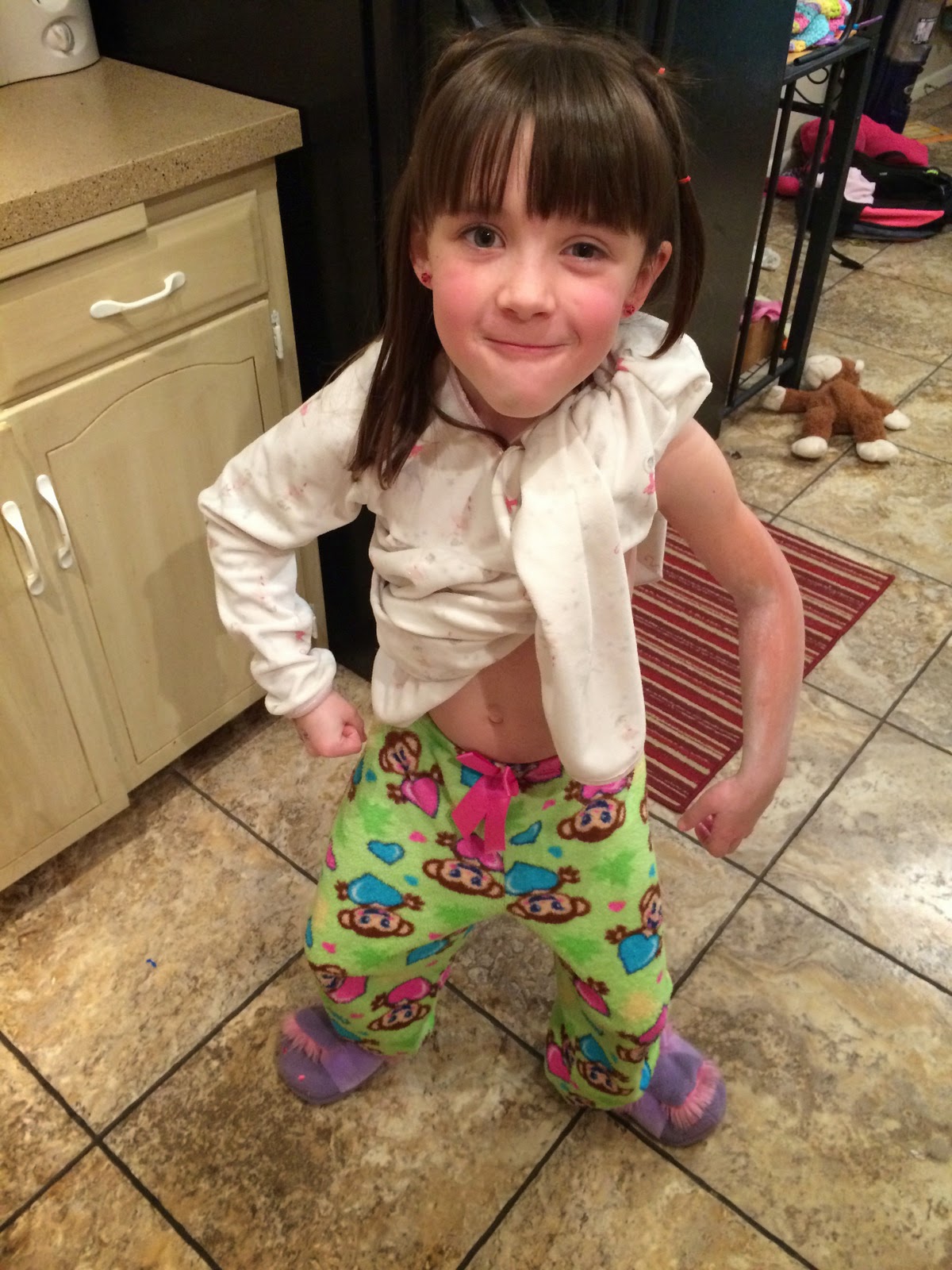 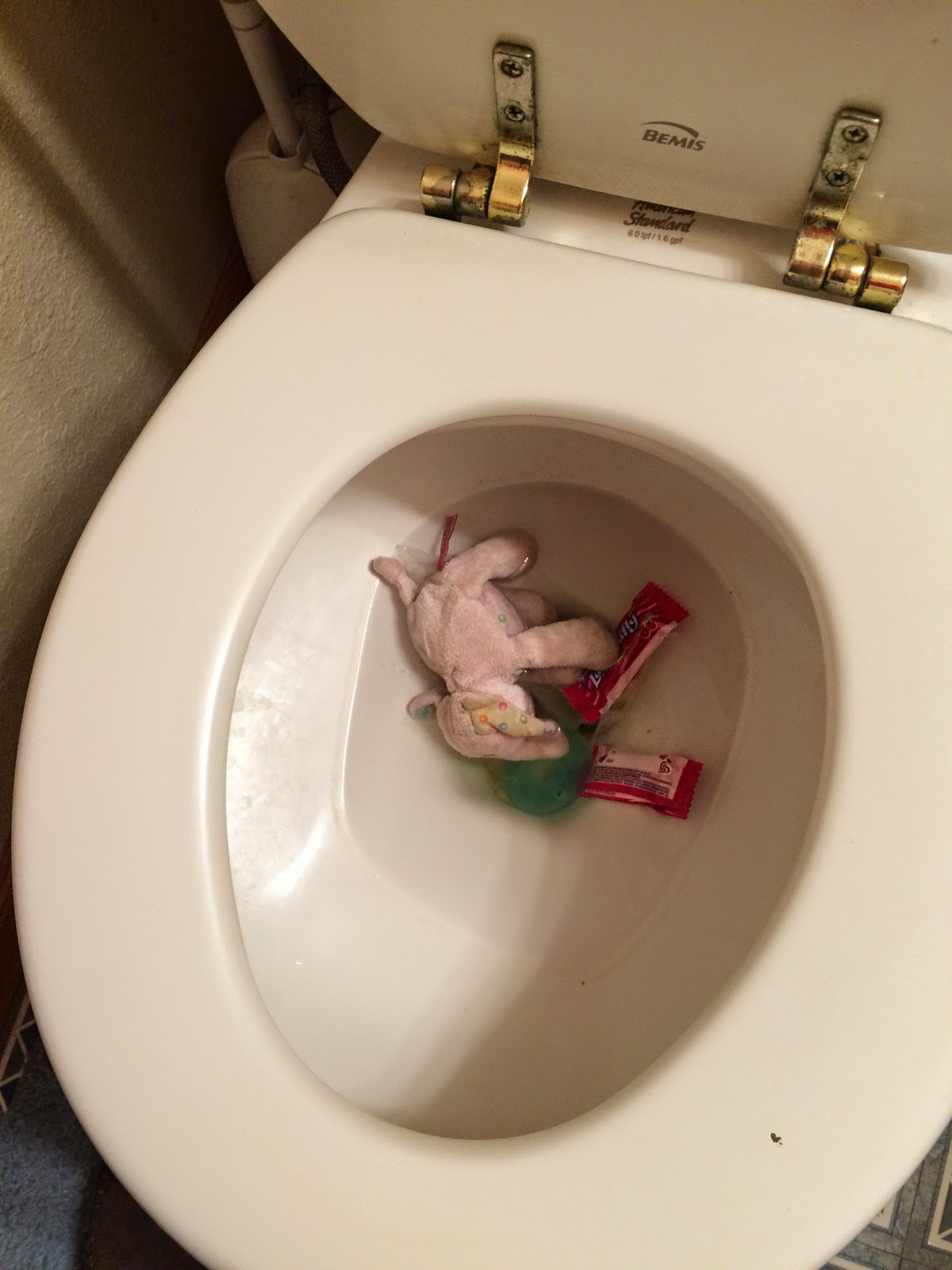 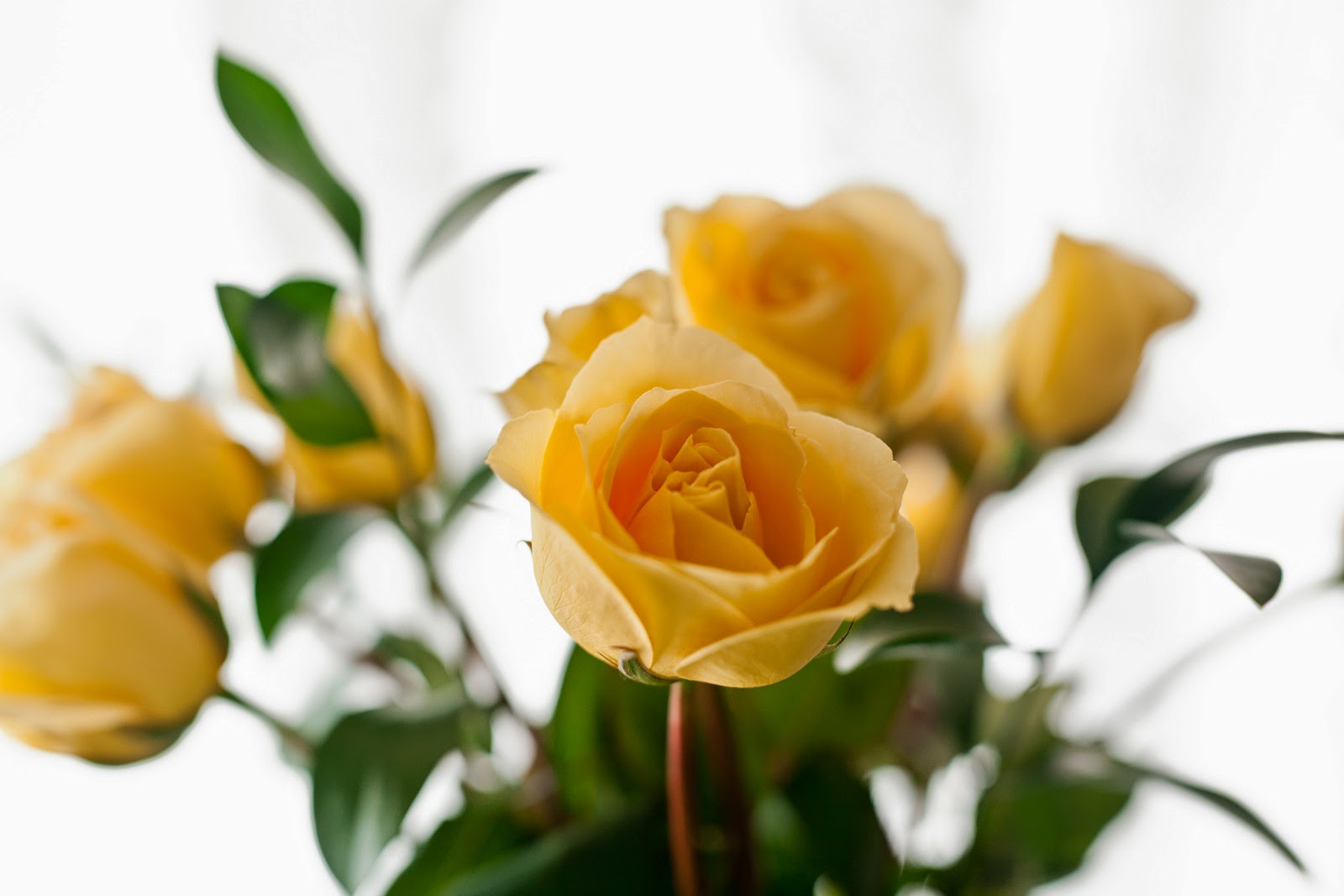 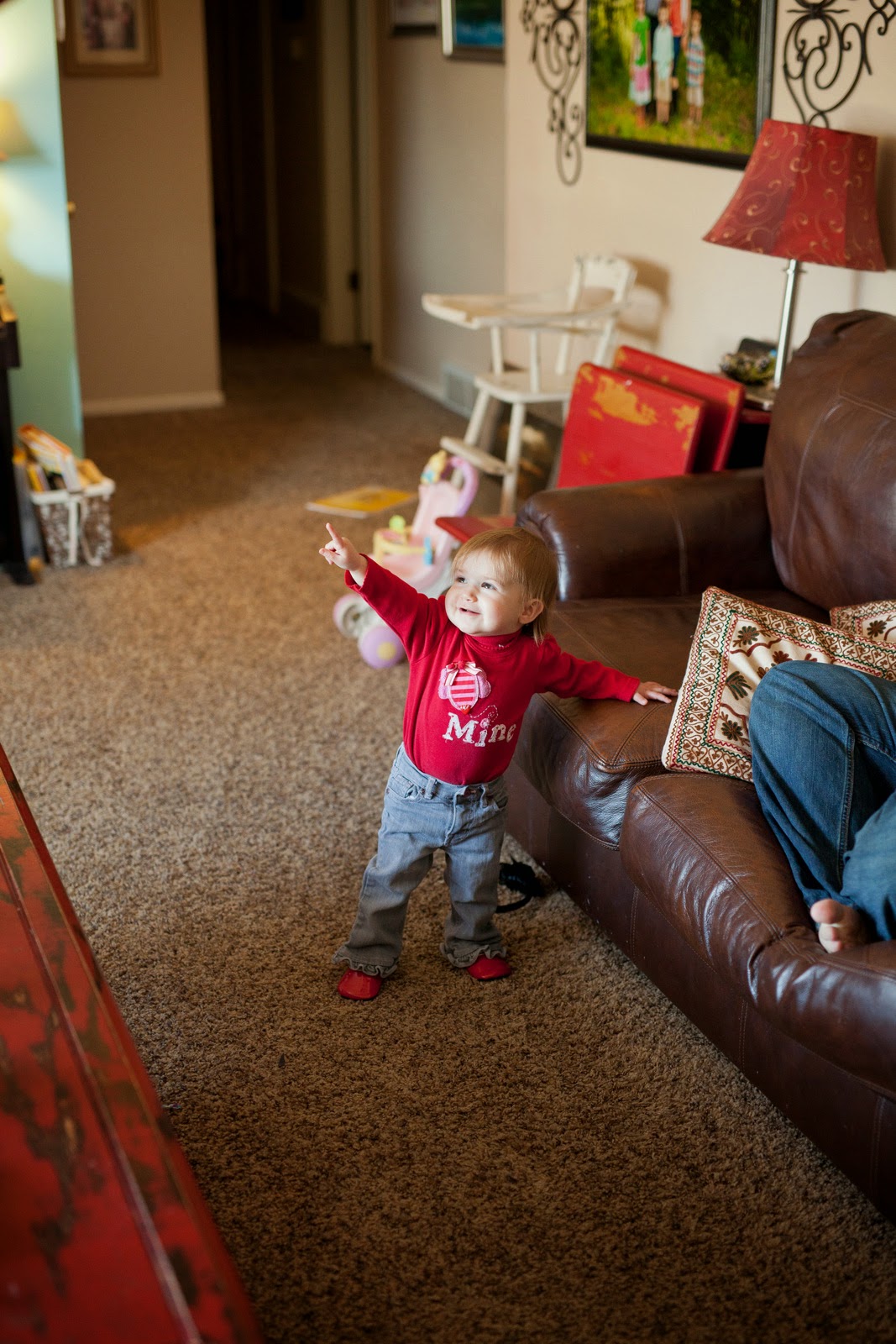 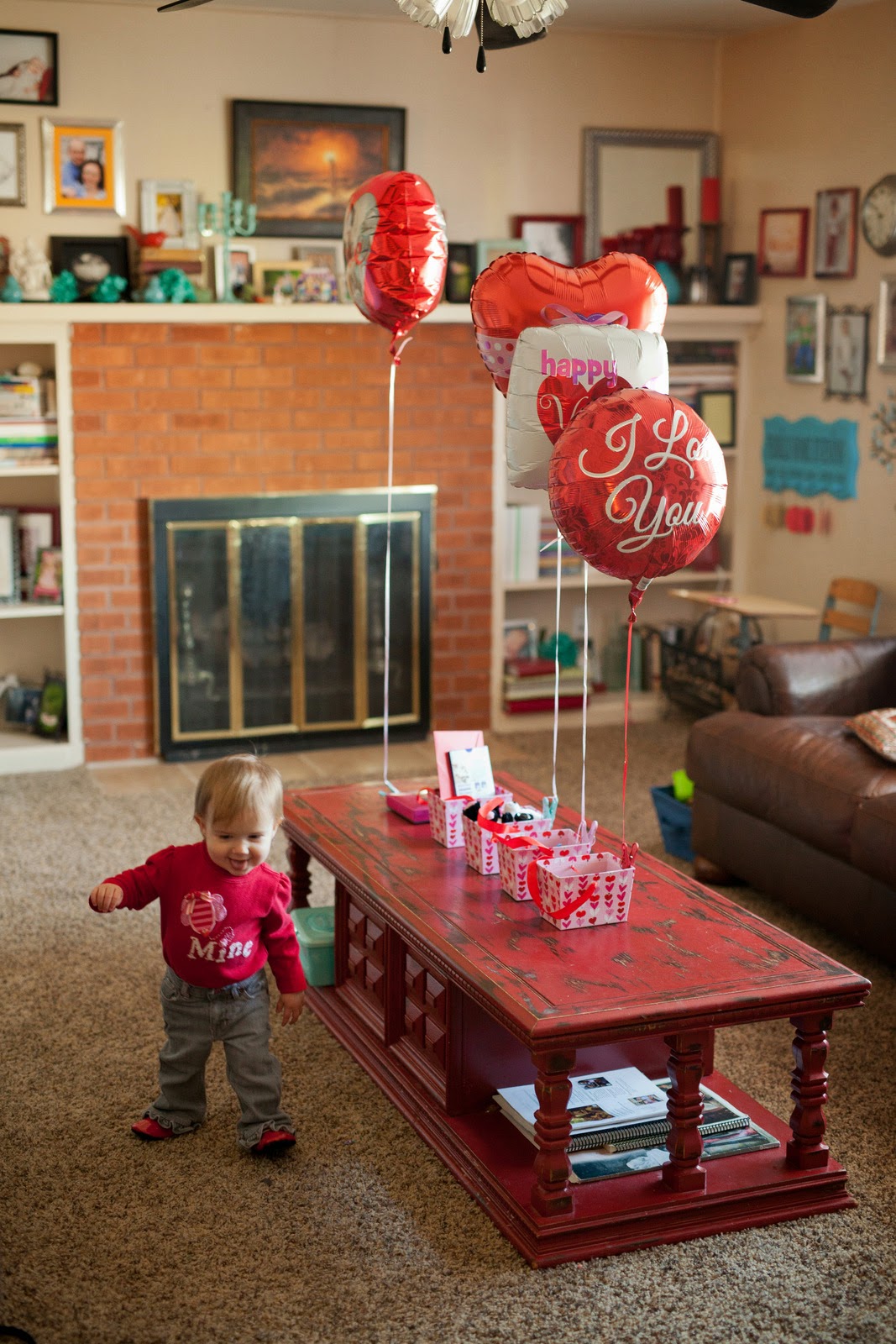 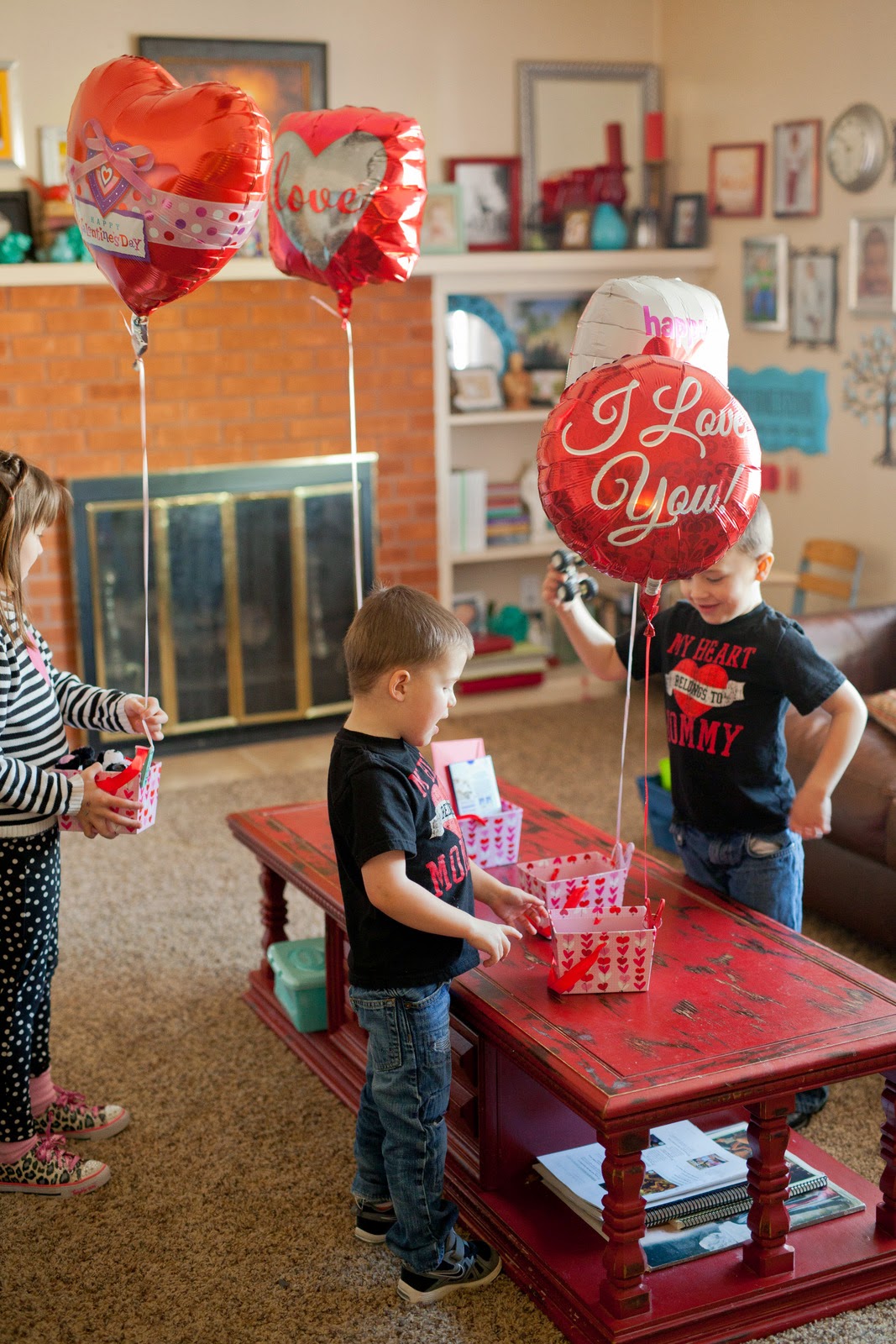 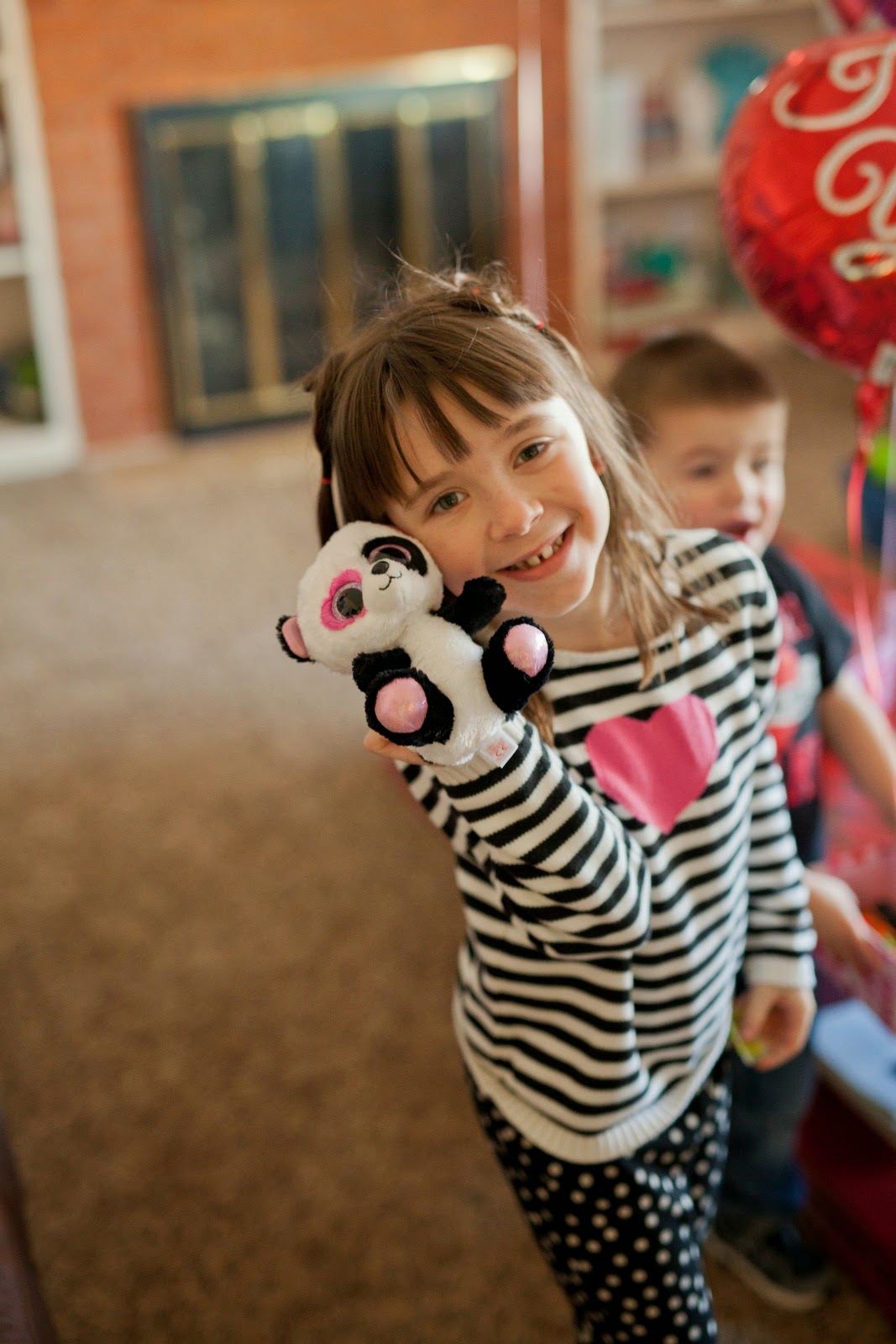 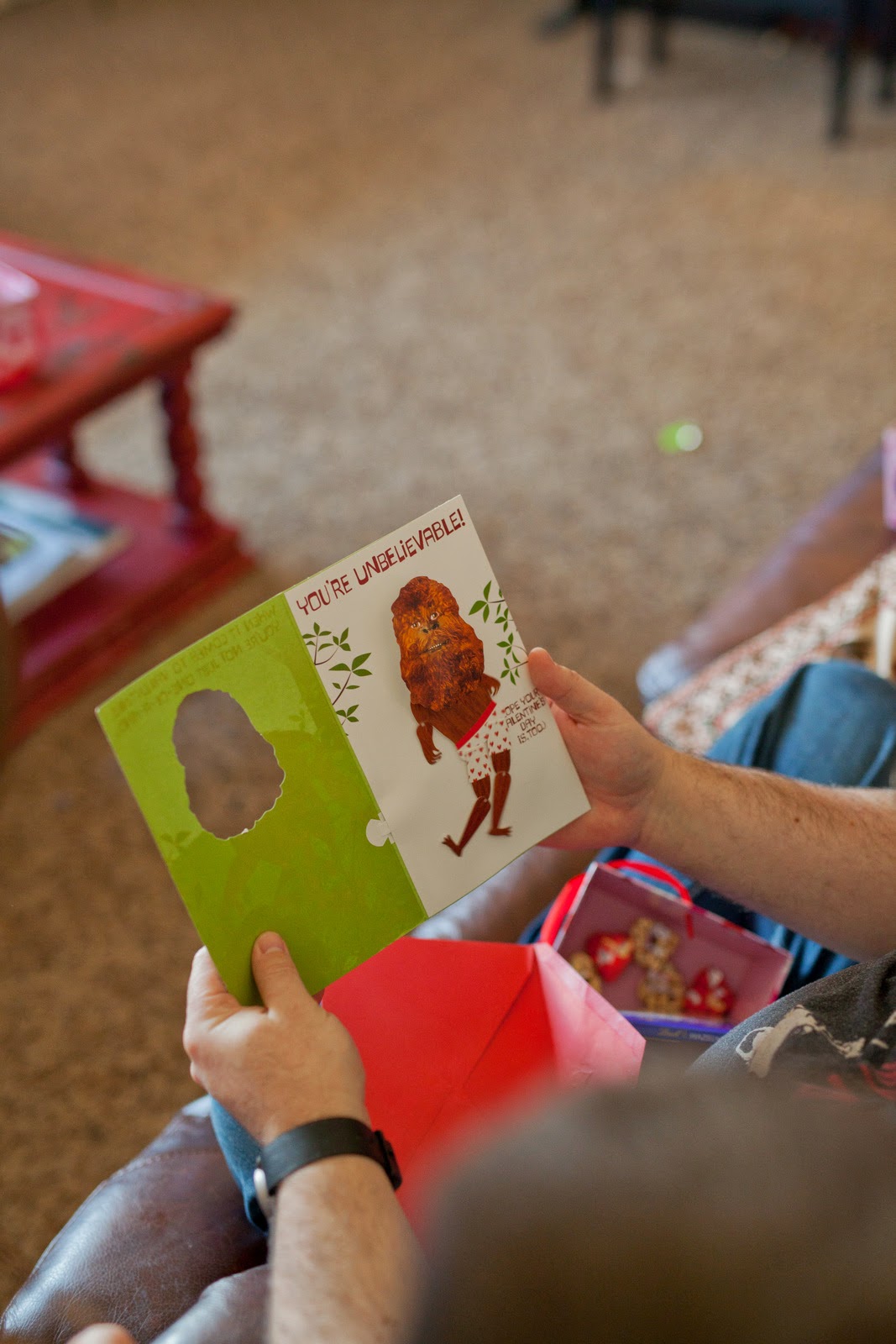 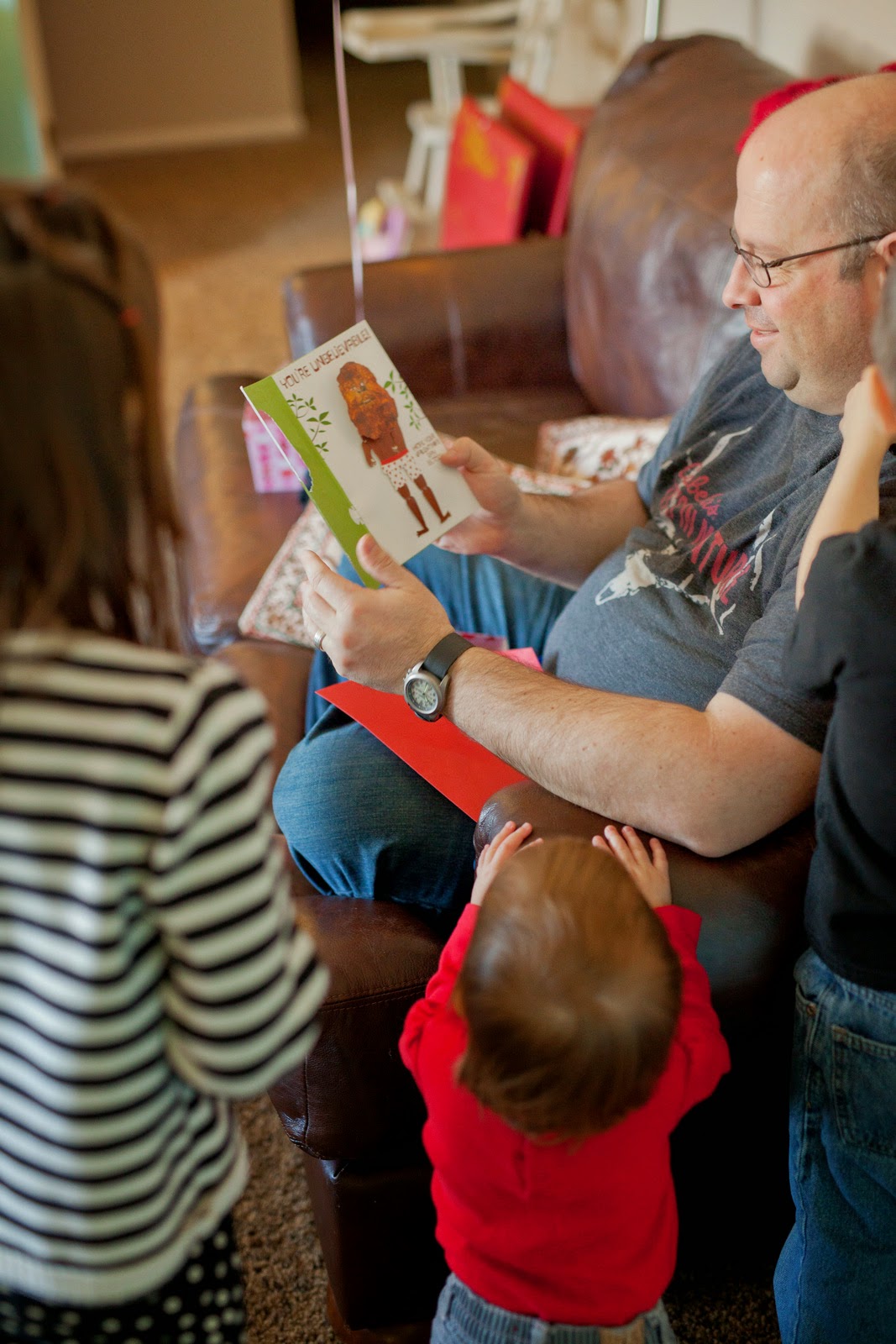 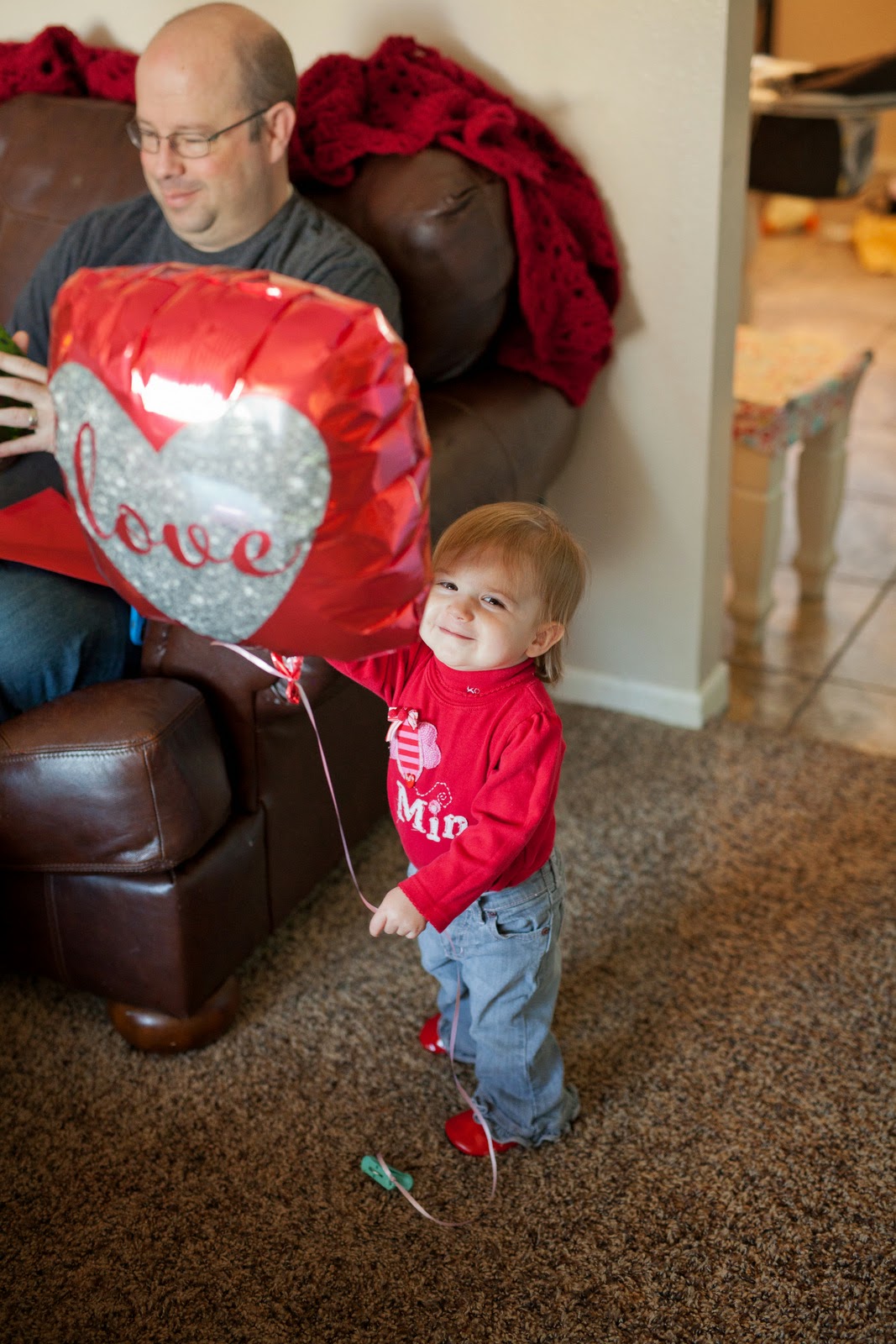 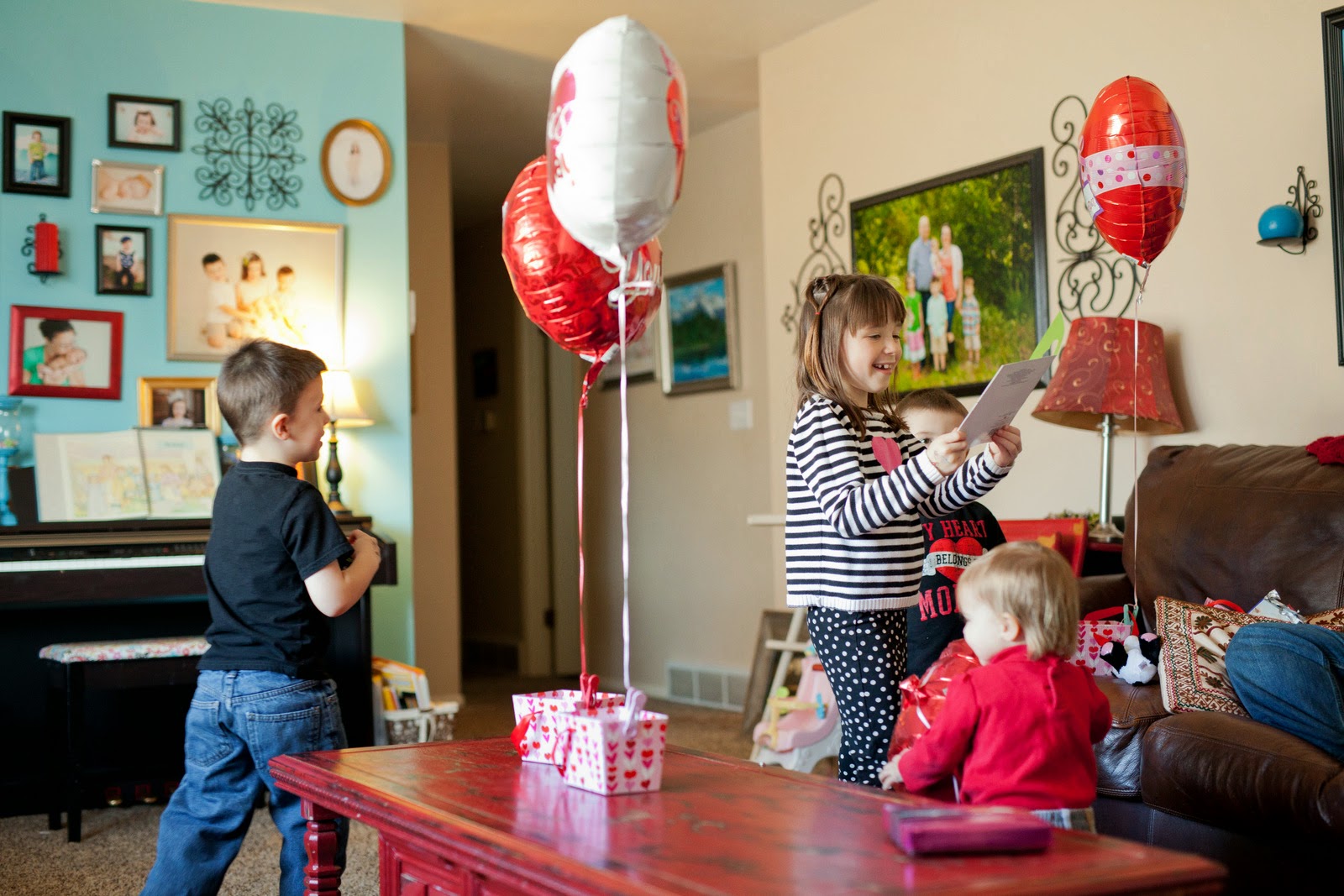 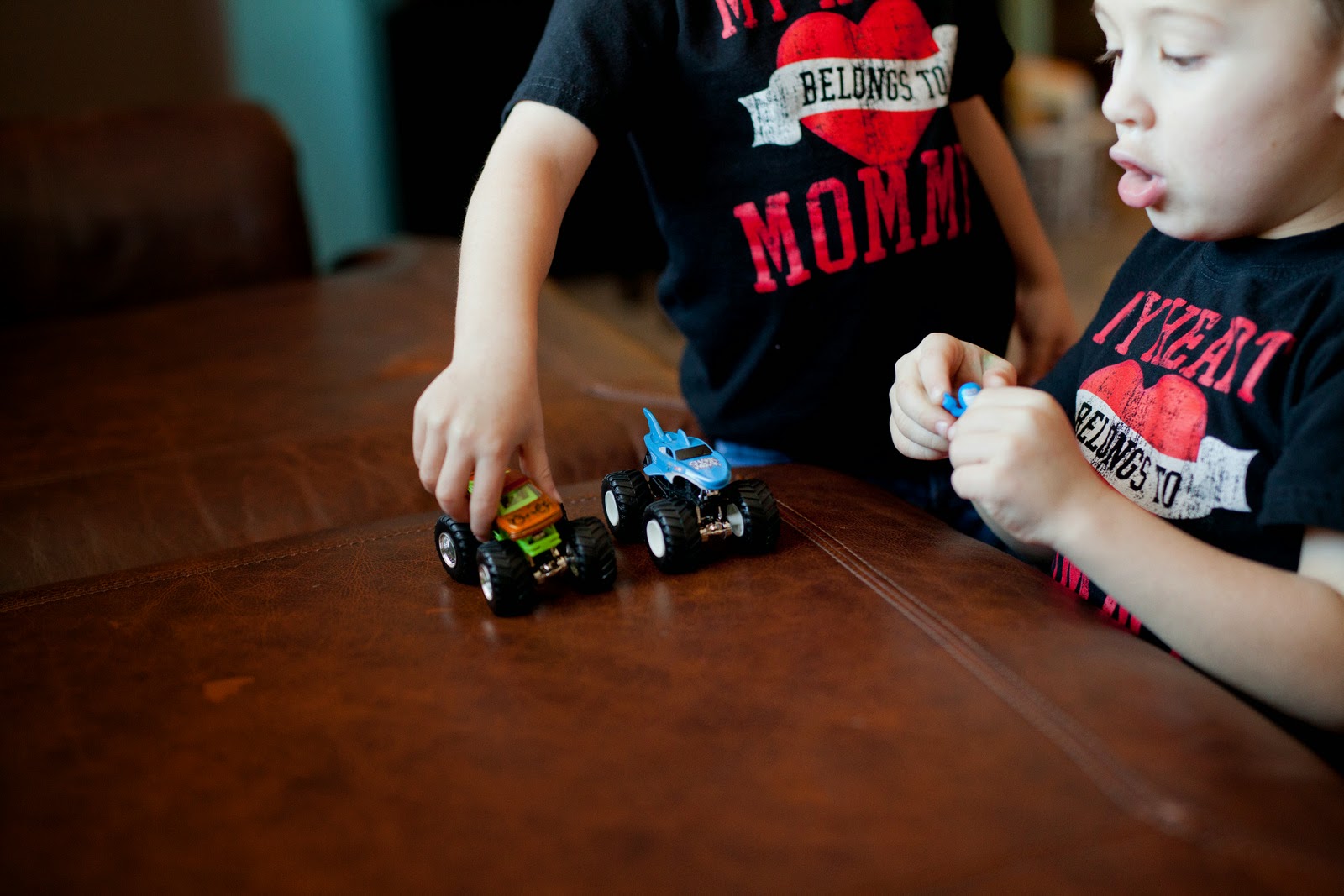 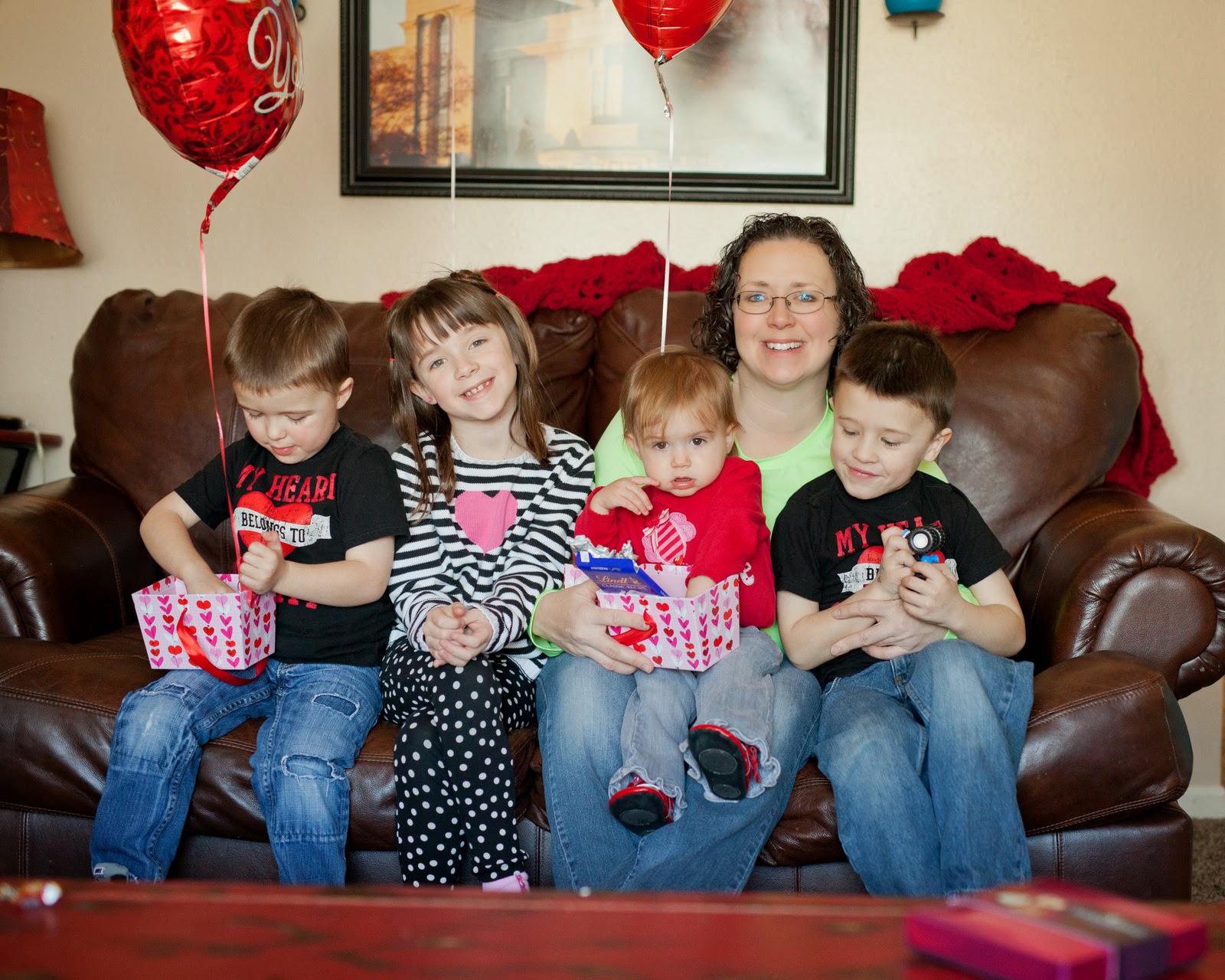 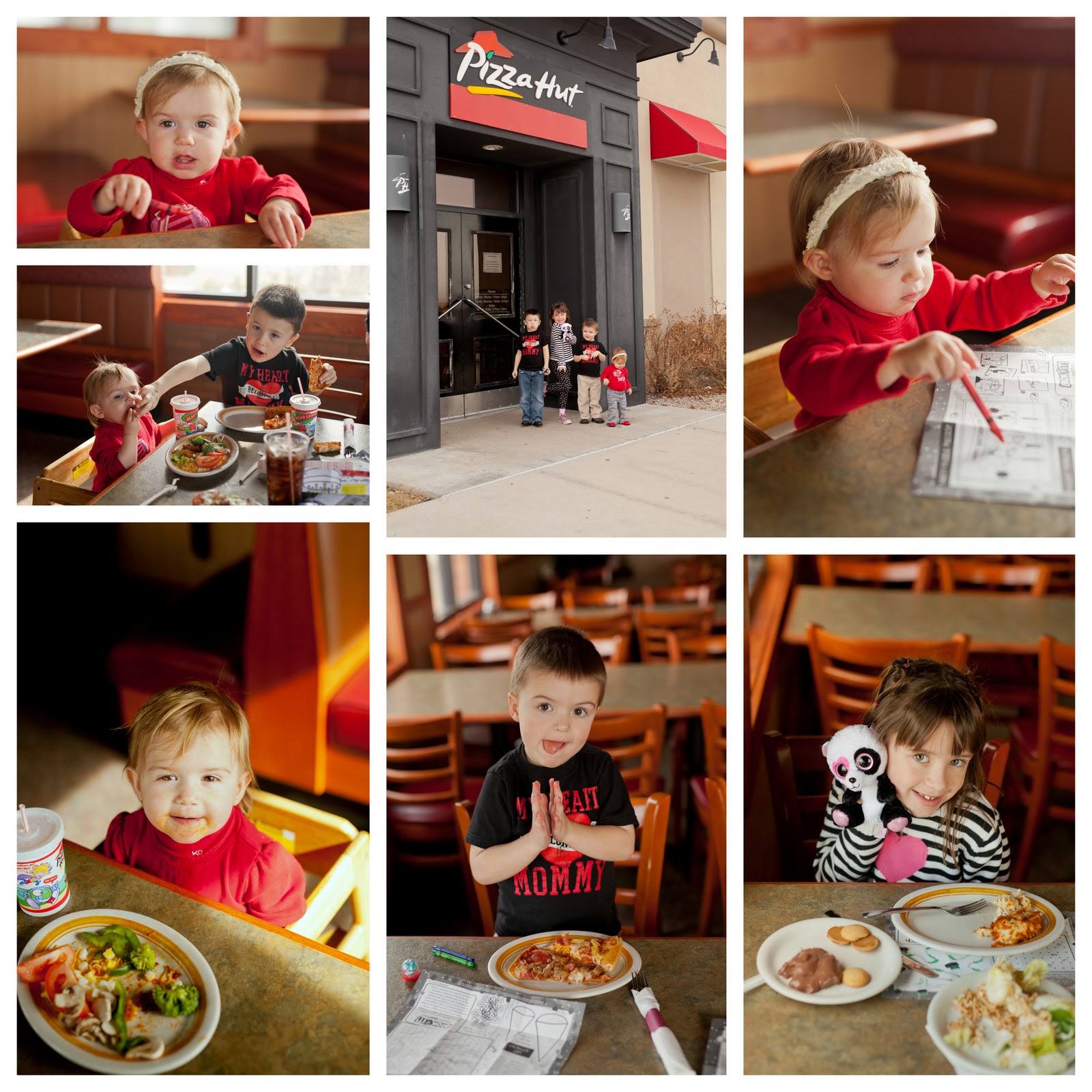 Happy Valentine's Day. I used to HATE Valentine's Day, mostly because it seemed like a useless holiday. I love it now! With the adventure of our own kids the day is a fun time to exchange little cards and candies. We had a really enjoyable family day at home. Justin sent me a bouquet of yellow roses and a small bouquet of flowers for Amelia. I got each kid a balloon and box with candies and a small toy. The kids were hilarious with their balloons, especially Evelyn. She stared up at the balloons for several minutes before her face broke up with a huge smile. We continued the tradition of Pizza Hut for lunch. Evelyn found a headband to wear all by herself. Everett cracked me up with his mouth licking. Amelia and Phillip delighted in visiting the salad and pizza bars all by themselves. Phillip decided celery dipped in pizza sauce was quite a delicacy.

Sunday afternoon the kids spent time assembling and writing their class Valentines. Everett laid on the floor on his tummy with a pencil writing "E" and "V" on his cards. Phillip got tired of writing his name after the second Valentine. He resorted to making smiley faces, tall lines, and silly drawings using letters in his name. Amelia was quite self-sufficient making her own Valentines.

Evelyn is developing into a toddler. She started throwing some pretty righteous tantrums. Whenever she wants some food she squeals and carries around a fruit packet. I open it for her and she cries, then runs into a corner to sulk. If I place it on the floor and walk away she will sneak back and eat her food crouched over it like Gollum. She absolutely LOVES to escape outside. Another favorite development we love is when she pretends to be a doggy. She will crawl around yapping and panting. I am having deja vu moments from Phillip's toddlerhood with Evelyn. She has quite a talent for climbing. She also loves to hide stuff from me. I found her favorite binky floating in the toilet in the basement along with Everett's candy and a fun full potty of poo. I am still debating over the worth of cleaning her binky or just trashing it. Justin and I witnessed a funny Evelyn and Phillip moment this week. Phillip was trying to push her over with his head. She slapped him on the neck and shook her pointer finger at him. Her expression said it all! "Phillip! Stop pushing me over, No NO!" We laughed so hard.

Tuesday we had 4 Elders over for dinner. I made crepes, eggs, and bacon. Justin slaved over the pans cooking the crepes. I had a distinct impression to invite my colorful friend Jennifer over for dinner. I texted her an invite. Immediately she texted back, delighted to come over! She was late coming over. She chatted with the Elder's asking all about our church. Jennifer has run into the missionaries several times in her life when she lived in Arkansas. Several times she mentioned how impressed she is with our home, kids, and how we live our lives. The next day she sent me the following text: "Last night meant so much to me. Thank you. No one ever invites me over like that. I adore you and your family. The missionaries were fun and very impressive. It's nice to see a group of men that age be so happy and focused on the good in life. You are one special person Jen! I wish I could have made better decisions in life so I could be the woman you are now. Very inspiring." Wow! This coming from a lady who could make a sailor blush with her vocab. Amelia went right over and snuggled on Jennifer's lap while we talked. I think kid's reactions are a very good indicator of a person. We love our Jennifer.

Amelia and Phillip made their own Valentine boxes. I found the boxes then left them to their own devices. Most of the other children at school had elaborate boxes. Mine were completely kid made and imagined. Phillip made a Baymax box from the movie Big Hero 6. I did help him hot glue the figurine on the box. Amelia wanted a leopard box, she ran out of time decorating it, she wanted to add flowers to the bottom of the box so it looked like the leopard was crouching in a flower bed. Everett had to have a box as well. He found a slim box just large enough to hold his Valentines.

Thursday morning Everett had his little party at Max's home. The kids decorated bags to hold their cards in. Michelle made divine cookie bars for everyone. We helped our littles hand out their cards to each other. Before we reached home the candy was devoured! Phillip melted a snickers bar in his hand. He was smearing chocolate goo on the van. I straight marched him into the bathroom with a threat to wash his hands or else get a spanking. He quickly requested a chocolate-covered spanking! After lunch Everett and I went to spend the afternoon at Phillip's school. I painted 22 kid faces in 2 hours. My favorite face was a little girl who requested a fox face! Everett was in heaven playing blocks and participating in all the fun. I am so grateful to Sister Tillotsen who came last minute to sit with Evelyn while she napped. I had a sitter lined up but she cancelled last minute. Mary was a life-saver! She even drove 30 minutes to get here from Lodgepole. I signed up and paid for Everett to attend the Learning Korner next year. It looks like most of the kids from our joy school don't want to sign up for a second year.

I got a call early Friday morning from a sobbing Amelia: "Mooooooooom, you ffffffforgot my Valentines!" Me? I forgot? Noooooo, you forgot. Still, I rushed over and delivered her Valentines so she could hand them out. Her teachers lets the kids pass out their Valentines throughout the day! I think that is brilliant.

Friday afternoon was a stressful mess. Evelyn went down for her nap as usual. I had Theresa from next door come sit with Evelyn while she napped. As I was leaving a Sister from our ward dropped off her 10 month old daughter while she dealt with an emergency. I picked up Mia from school to get her cast removed at the Ortho specialty clinic. Just as I pulled in to park, 5 minutes early, Theresa called frantic because Evelyn woke up howling. I checked us in then rushed home to get Evelyn and rush back to the clinic. I waddled into the clinic with the boys hands shoved in my pockets, Taty's car seat in one arm, and Evelyn on my other hip. Both girls were crying up a storm. We finally get checked in and settled in a room when Amelia starts crying along with the babies. She was scared that the cast saw would cut her skin. Poor kid! The cast saw did not cut but it did burn her skin in several places, which only added to her paranoia. The babies went nuts over the loud, whining saw. Thank heavens a nurse came in and took Taty on a walk to calm her down. After another x-ray the Dr determined her bone is completely healed! Amelia's skin was dry and crusty, gross. We slathered her skin with Nivea cream after a long bath. The cast shavings made her tights and clothes itch horribly, she tore off her tights while we were at the clinic. I had the Ortho check out my knee. He was quite disturbed over my leg length discrepancy. My right knee has bothered me for over a year now. It keeps me from kneeling, walking, and running. He had me go get an x-ray of my pelvis. After 38 years he determined my leg discrepancy is actually due to a small hip joint neck and a long hip neck joint on the other side. I felt special when he said he's never seen hips like mine. He warned me that back pain, hip pain, and knee pain will be a constant from now on. He injected my right knee with cortisone to help alleviate the pain. My knee hurt like heck all night long. Saturday my knee pain was mostly gone. I even knelt to change Evelyn's diaper with no pain. Hallelujah.

Amelia and I had an interesting conversation. We know a lady whose husband was put in prison leaving her all alone. Amelia was quite worried. She told me from the back of the van, that when she gets old enough to date she wants to pray about those she dates. She was pretty worried about not making a good marriage choice. We discussed in length about making wise choices in friends and using prayer to invite HF to help us make choices. I was so impressed with her cognition of the entire situation. She told me later that the choices we make now, especially in a husband, will affect the rest of our lives, so it is important to make the best choice we can. Wisdom from the mouth of babes!

Phillip has very expressive eyebrows. He woos the ladies with his wiggly eyebrows. He told me that girls fall in love with him when he dances his over his eyes hairs. I die. LAUGHING.

Saturday morning Nora's granddaughter finally came over for some birthday photos. She looked adorable in her Apache Camp Dress. The dress actually fit perfectly! I only had to hem up the dress a little. Jamie, Nora's daughter told me she is expecting another baby in September! I cannot wait to hold their newest addition. 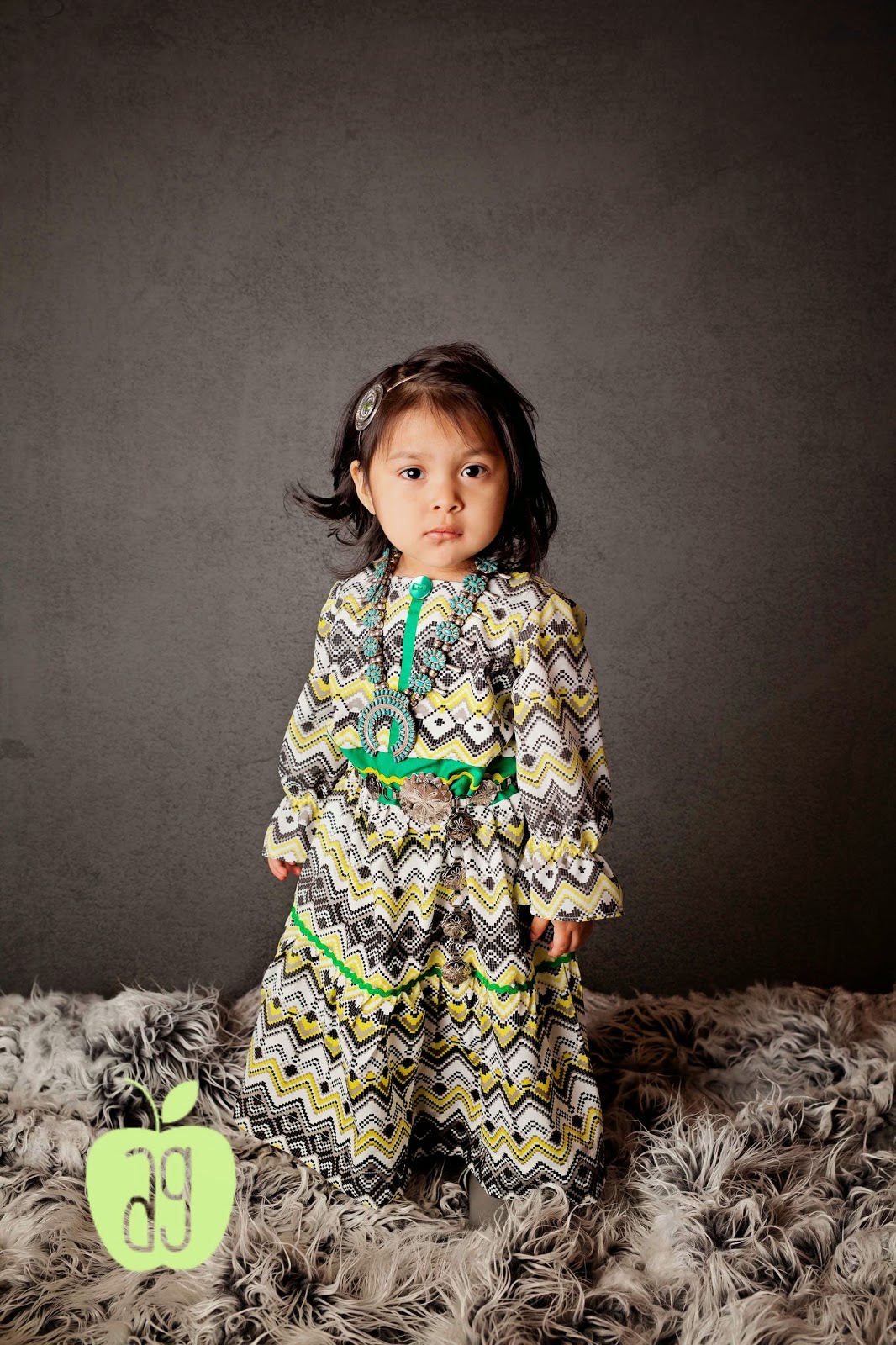