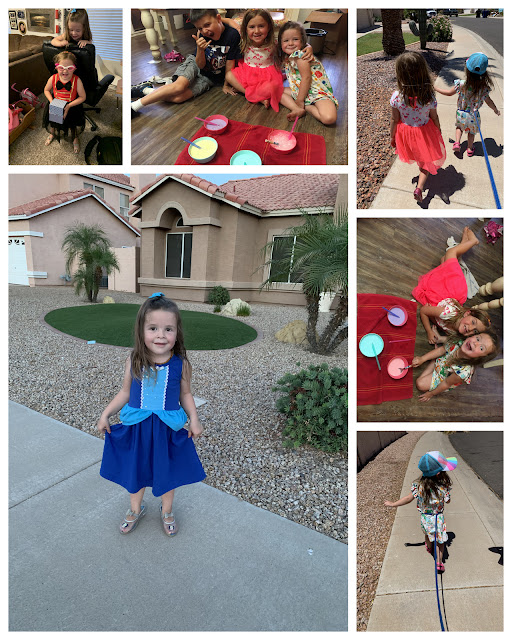 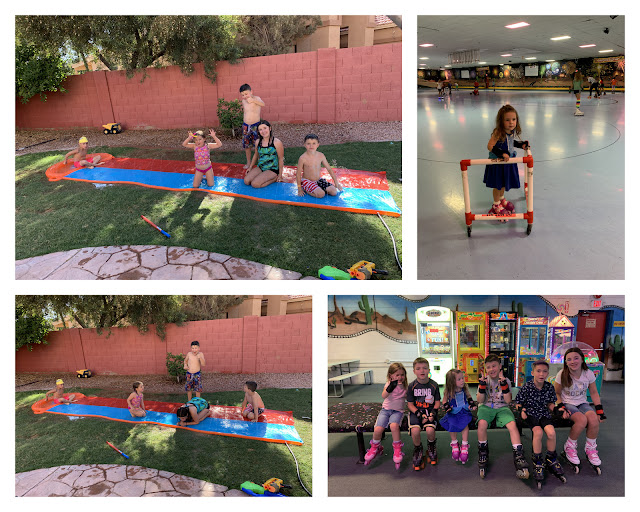 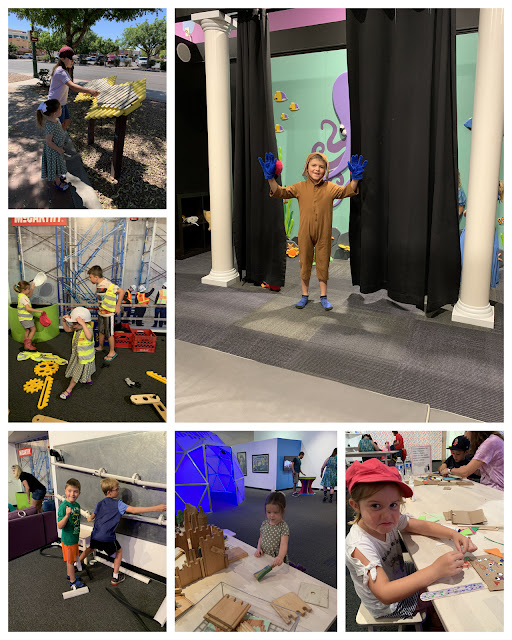 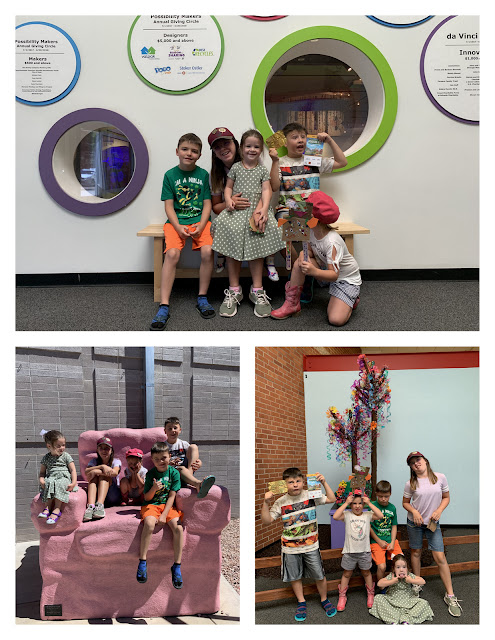 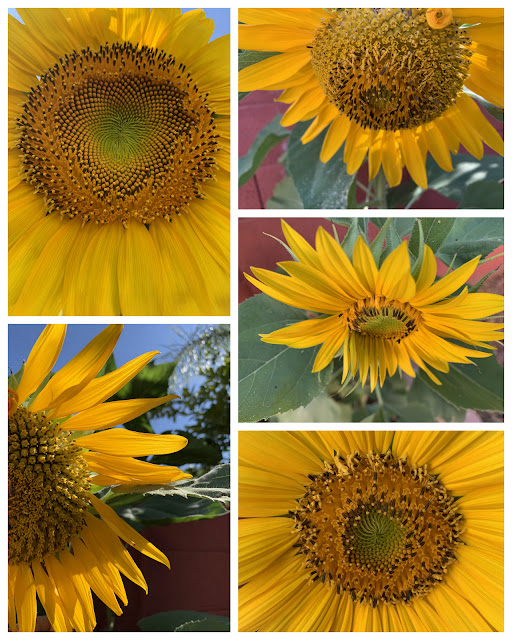 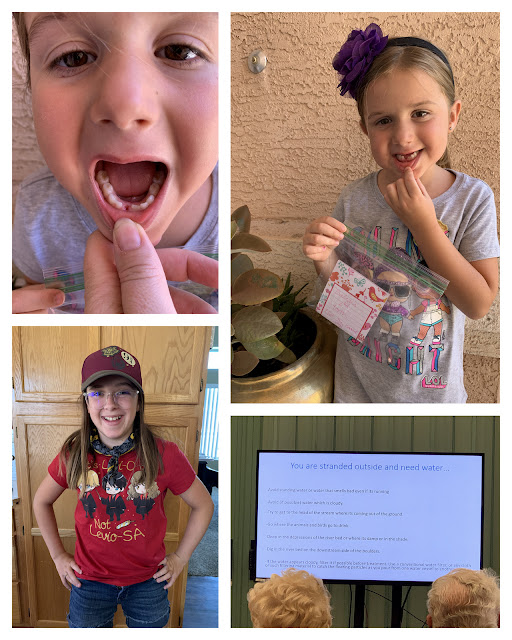 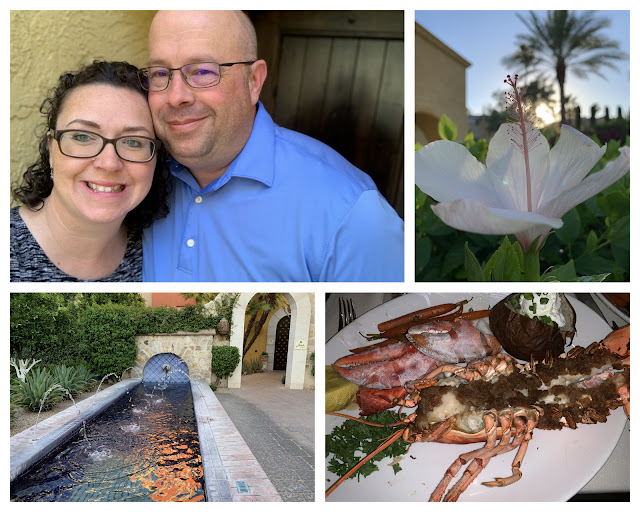 I finished the mountain of laundry Tuesday evening. Phew! So many towels, sheets, pillow cases, swim suits, etc. It was up to the kids to get their clothes neatly put away in drawers or hung up by Wednesday night. I always feel like a champ once the last piles are folded and ready, no matter that the rest of our house looks like a clutter fest. Small victories, am I right?

Josie had Amelia walk her around the block like a dog. She had a leash secured around her waist, a rainbow hat, pink shoes, water bottle, and snacks ready to make the journey in 100 degree heat. Amelia would pop her a snack every once in a while! Evelyn went along for moral support. Mia made the girls colored milk, pink was the best according to Josie. Evelyn was quite intent on going roller skating, we headed out at 3 pm for a couple hours of fun. We turned right around when google maps showed me it was closed until 5:30. Bummer! The kids pulled out the slip and slide for entertainment instead. Jacob wore a hair cap to preserve his purple hair! That kid is classic. Amelia really wanted to swim but let her fears get in the way, it's hard to know when swimming is possible and not that first summer of growing up a little bit more. I want to get her a period proof swimsuit, yes, those are now available. The rest of the kids enjoyed some time in Warren and Ranae's pool. Justin came home and discovered a leak in our pool! Yikes. He was all in a huff getting that resolved. He blew his top when he found his sanuk shoes dripping wet. I told Amelia to wear them for convenience's sake. Big mistake. He went to Home Depot instead of participating in FHE. We all had a round of apologies once he came back. We settled it all over fresh peach ice cream shakes. Josie and Evelyn got new fancy dress ups this week. Josie is totally living in her Cinderella dress. Evelyn is in heaven with a Greamest Showman (spelled how she pronounces it) dress. Josie insists on matching her dress with size 10 Cinderella shoes, three times her regular size. Makes us all laugh to watch her totter about in her new get up. Amelia made snickerdoodle cookies all by herself! I did help shape and sugar the dough before baking. We took over a plate of cookies to welcome the Darveau family to Gilbert. They moved here on Saturday from Sidney! Amelia and Janea spent many years in school together and share lots of mutual friends. We are quite excited to have them just a mile or two away.

Tuesday we made it to the skating rink! We stayed for 4 hours of exercise and arcade fun. Josie even joined in the fun with our kid skates. I seriously look up to folks who man the arcade prize counter. The amount of time it takes kids to decide on cheap toys and candy drives me nuts.  Evelyn improved quite a bit on her three-wheeled skates, not in-line, but a normal skate hybrid. We came home and played on the slip n'slide again. It was hot! I made quick Korean tacos for dinner. Pack meeting this month was a pool party. I was the only mom in the water, I did have two sinker-swimmers who hate floaties. I actually felt cold getting out of the pool, my skirted suit was freezing cold.

Wednesday was our water day. Instead of searching out a new pool we were home bound due to 6 extra kids playing at our house. We had Chloe and Ronald, Isla, Jacob, and Janea and Kirsten! The kids settled on playing in the pool. I'm happy we did not have to go anywhere, gave me a chance to catch up on a bit of editing and cleaning.

I used our pogo passes to get us into the I.D.E.A museum for a morning of play. Last time we went half the exhibits were closed so it was nice to explore the entire space. The closed section now housed modern American art showcasing different areas of our country. At each section the kids could stamp their maps! Evelyn made a silly robot person with cardboard and art supplies. Josie was quite amused with the castle building blocks. Like usual Everett disappeared, I saw glimpses of him at the marble run, the super-sized building set, the computers, the sound machine, etc. Amelia and Phillip were boooooored after 30 minutes. We spent quite a chunk of time in the creative play area. Josie's eyes betrayed her total visual overload. Everett and Evelyn put on plays for me. Everett was a rabbit-deer with fish hands. Evelyn was a rockin' roll character. Fun times.

Evelyn finally lost her tooth, she whacked herself in the mouth with a flashlight (I may have helped on accident). Her tooth went from wiggly to super wiggly and a little bloody. As I patted away the blood I plucked that tooth right out. She yelled at me to just pat it and not touch her tooth. I showed her my prize! She wrote a cute little note to the tooth fairy, saying "I love you!"

Five years after out last getaway Justin and I enjoyed a staycation here in the Phoenix area. Debbie Godard helped with the kids Friday afternoon until Linda Tanner could pick up the kids using our van. The kids got to swim lots in their pool. Josie took to calling Brother Tanner, my swimming friend, he was quite the amusing pool friend. I hear Josie jumped right in without her floaties, Amelia was nearby to pull her topside. The Tanners live next to the Packards, I hear they all had a rousing pool party. Evelyn got an early morning date with Justin at the car wash!

Justin and I enjoyed a quiet lunch at Ahipoki Bowl, a delicious bowl of sushi ingredients! Yum. We did a spot of shopping up in Scottsdale at Bed, Bath, and Beyond. I finally replaced my gross garlic press, damaged steamer basket, and scored new flip flops. We had a romantic couples massage at 4 pm. It was romantic seeing Justin squeezed into a tiny bathrobe! What a laugh we shared! Our wine glasses were filled with Orange-Vanilla Coke Zero. Justin tipped over his glass which shattered. I'm sure all the folks out in hall could hear was constant tittering. I will say those little sandwiches were quite tasty. Those massages woke up several sore places I did not know about, the soles of my feet, my right hip, and goodness that neck/shoulder massage felt awesome. I had the masseuse work on my right inner elbow, that hurt, a good hurt. Our next stop was our hotel the Omni in Scottsdale. Justin pulled in counter traffic, those bell boys raised a couple eyebrows at our outlandish arrival. We were soon forgotten when a larger family exited the main building. After parking we explored the grounds. I felt lost in Andalusian paradise, a throwback to Southern Spain and Portugal. We had dinner reservations at 7 so we relaxed for a bit. Justin got reservations at the Salt Cellar, a seafood restaurant. I lamented we did not get any seafood in San Diego so this for sure made up for that! The restaurant is sunk into the ground, a true cellar! We both ordered fresh baked lobster stuffed with crab and scallops. It was delicious, a messy delicious mess. Our waitress did most of the hard work making the meat accessible. My mind went back to the best seafood I've ever had in hole in the wall locations near the Red Sea and another in Cozumel. I quite enjoyed playing with my lobster claws. We settled our food with a nice long wander about the hotel grounds in the 100 degree heat. Justin wanted to know if he should set his alarm for 8 am, I agreed. His alarm went off, gently woke me up. Apparently, Justin got up showered, dressed, and saw I was still deep asleep. He startled me awake with a nudge, "Jenni, it's 11 am, we need to check out in a little while!" I was in total denial. We laughed for quite some time over my denial. Whelp, we checked into a hotel so I could sleep 12 hours straight. I imagine Justin was more than a little bored for 3 hours, seriously, I guess that was much needed. I was alert for a couple hours but then felt more tired than ever! We grabbed some brunch at Egg N'Joe before going to the temple. We were able to do a sealing session, several other couples and individuals brought family names to work on. I am so pleased with the new changes to the sealing promises. Just beautiful! We picked up our kids at 3 pm from the Tanners.

I got to attend a Stake Preparedness Fair, focused on water storage in the desert. I have several empty water containers (roughly 100 gallons total). We never filled them after moving. I learned quite a bit and am enthused to get our water storage filled out. My biggest worry is having mobile water in case we have to leave with our 72 hr kits. Dad suggested hunting carts, pull our water and packs instead of trying to carry it. The speaker attached two large tanks to his water heater with PVC, those containers are just part of the heater now. Instead of 50 gallons the system always has 400 gallons of fresh water! Ingenious if you ask me. I learned our pool is not viable as water storage due to the chemicals and swift turn to stagnant water if not continuously filtered.