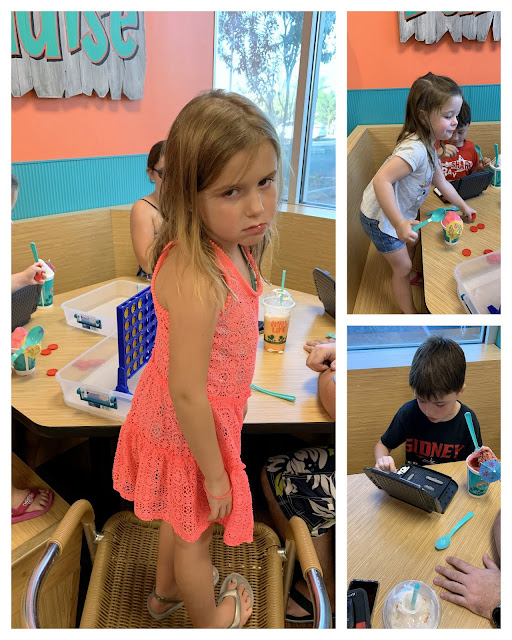 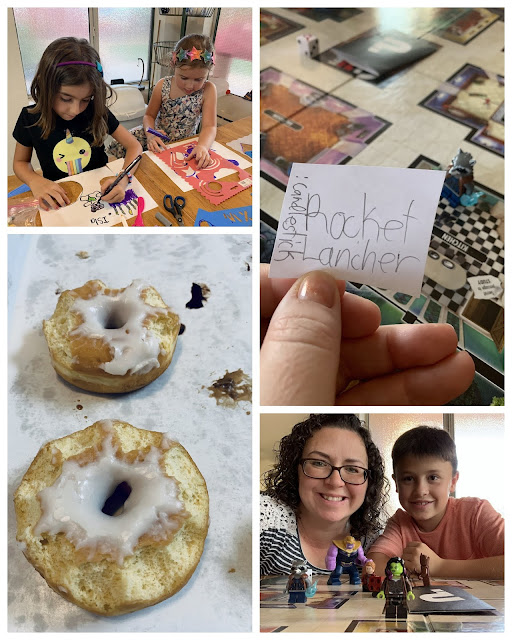 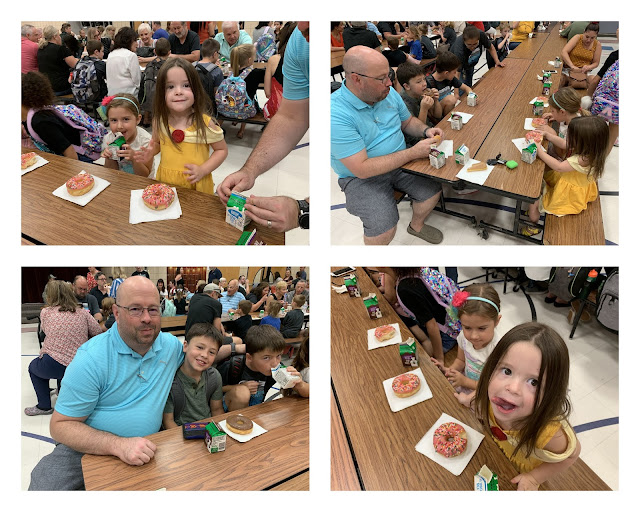 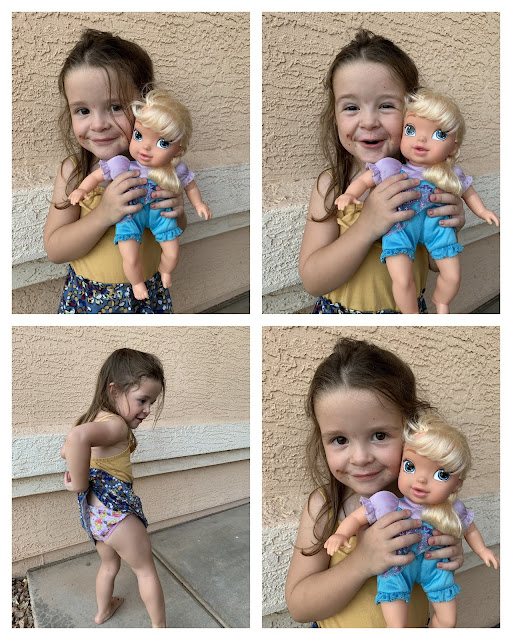 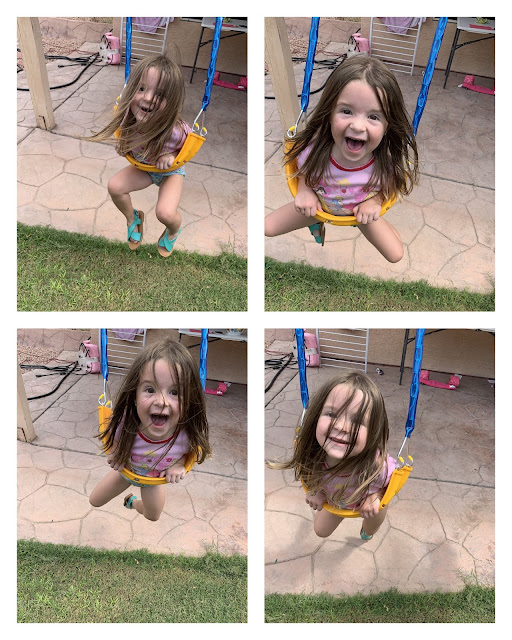 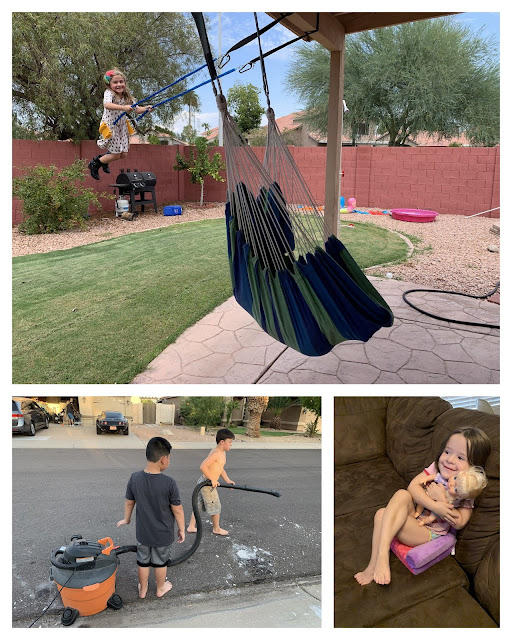 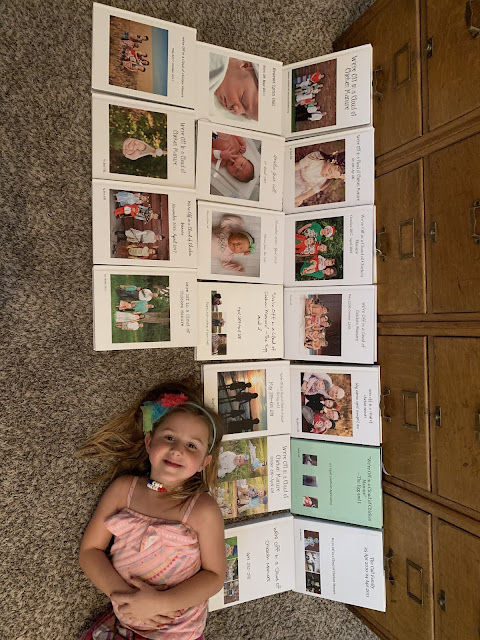 I had big plans to venture out and explore Slide Rock, AZ for Labor Day. The rest of the family had big plans to be lazy, they won (this time). We rested and cleaned in the morning. Justin took the older kids to Mesquite Groves pool in the afternoon while Josie took a short nap. I met them there around 3 pm. Josie is developing quite the little personality. She is determined to dress herself, do potty alone, choose her outfits and shoes, and all her activities. So many opinions suddenly developed in less than a month! We loved the pool time with Justin in attendance. After swimming we stopped at Bahama Bucks for a cold treat. The boys played battleship for the first time. Phillip cheated and never put his ships down, moved the ships when a hit was imminent.

Josie adores going to her class most mornings at the gym. I did not think she would love it as much as she does. Her favorite activities are playing outside on the bikes and the cars with the big eyes. I sweat my eyeballs out for an hour. After a few weeks now of intermittent fasting and exercising I hoped for some progress. Dang it! Nothing. Still weigh the same. On a positive note, I can still do the splits. Ha ha ha ha.

Phillip spent a good hour converting Clue into Guardians of the Galaxy Clue! He replaced the tokens for Lego figures and the weapons for more appropriate Galaxy weapons. We played a game or two, he won both games (mostly because he withheld cards when he should've shown them). One night last week Jacob, Phillip, and Everett had a rousing game of Pokemon after dinner. I sure enjoy listening to the boys work together and play. Everett is mastering his piano assignments, he practices several times each day! After a couple days he is ready to move on to the next pages. Phillip is actually the better player but will not practice so is quite a ways behind Everett.

Josie finally earned her Elsa baby. She worked all day Thursday trying to listen to her body and poop in the potty. Around 4:30 she finally did the dastardly deed. She was on cloud 9 to FINALLY earn that baby doll, I guess a week seems like an eternity at 3.5 years old. She's since put her poops in the potty...at least for the remainder of this week. The next morning we went for a spot of shopping to pick up an embroidered jacket (with GCA logo) for Mia I ordered like 2 months ago. Next to that store was a Goodwill and on the other side a ReStore run by Habitat for Humanity. Josie found a toy chair that folds into a bed. We are all laughing over her antics with the couch thing and her Elsa baby. She's taken to watching TV with her couch and sleeping with her Elsa doll on the couch at night.

Justin stayed home from work on Friday. He worked from home until noon then ran errands in the afternoon. The restoration crew finished painting and trimming off the work upstairs! Now we are just waiting for carpet next week...more like the week after. I think the paint fumes and a slight cold caused a very nasty migraine. Oh man, I was in dire straits. Justin stayed home so I could attend the RS retreat up at the Wolford's cabin. I ended up staying home instead. He still made dinner and watched the kids. At one point I came home to find Ronald and Phillip had smashed a block of plaster of Paris in the sidewalk and street with hammers and even a crowbar! There was chalky stuff for a good 10 foot radius. Justin told those boy a solid "no" when they asked to extract the gems. Cheeky buggers. They missed part of dinner cleaning up the mess with a vacuum. I spent a couple hours with a small group of ladies who could not go up to the retreat due to nursing babies. I'm not in the nursing category but those were some exciting hours of mom talk (Ashley Boyle, Brooke LaBarr, Kelly Roberts, and Caitlyn Kleisler). I got home near to midnight, Justin let me sleep in to rest my pounding headache on Saturday.

Justin and I are quite enjoying the Finance class. I was more than a little resistant, but the program is truly inspired. So far nothing required is over the top or unexpected. Next week is budgeting, which could create a bit of tension since I hate the idea, but seems like it is finally time to put on my big girl pants. We had Call family dinner at our house this month. I made chicken Tikka Masala and rice pilaf, the others brought raita, naan bread, and lentil stew. That was a delicious dinner. We celebrated 4 birthdays for September, Spenser's three girls and Tyler's belated birthday. Laura tried to teach me how to correctly dutch braid hair, that was hard to retrain my hands, turns out I need more practice than I realized. If only I had a willing daughter to practice on.