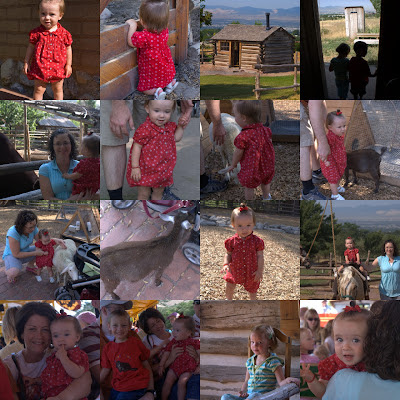 Once a year the "This is the Place" Heritage Village has an open admission day. Charity told us about it late last night. We decided it would be fun to go since we will be in California on the 24th of July. We arrived early at 9:15 am to avoid the crowds, accommodate for naptime, and cooler weather. Lately, Amelia is enthralled with animals and the sounds they make. I was glad to finally show her a live horse, cow, sheep, pig, goat, chicken, etc. She was not very sure what to make of the petting area. Most of the animals were taller than she was, which admittedly is a bit intimidating. The smallest animal was a pygmy goat who decided to chew on my Italian stroller and red purse. She also rode a pony named Sugar. We met up with Charity, Melissa, Jonathon, and the kids at the train station for a cruise around the village. I captured some nice pictures of the Pay cabin (Justin's side). We all walked over to the Pay cabin and listened to Charity, Melissa, and the cabin's volunteer talk about the Pay family. Amelia was very tired from too much fun so we took her home for a longish nap.

And thanks for the help in sacrament meeting today . . . it was great that Amelia actually laid down on my shoulder - aww - sweet girl! I will miss her while you guys in are in CA.

I was glad to see her give you some cuddles. Tired baby!!! I can't wait for Kate's birthday party.

Fun! That looks like I neat park. I have always wanted to go there. I have heard wonderful things about the Treehouse too and look forward to taking Saige there. I know she'd love it! Beautiful pictures! You are so talented!