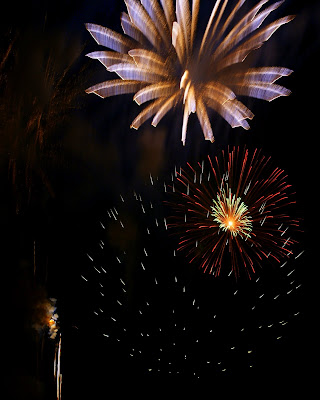 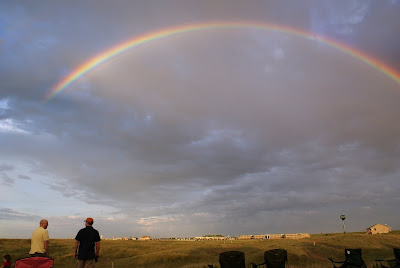 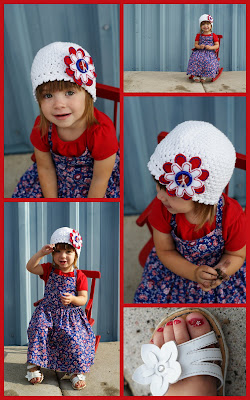 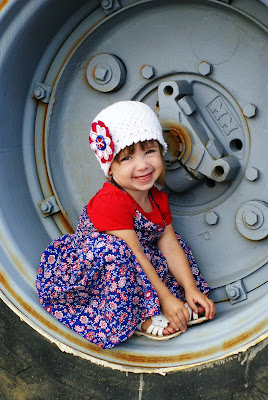 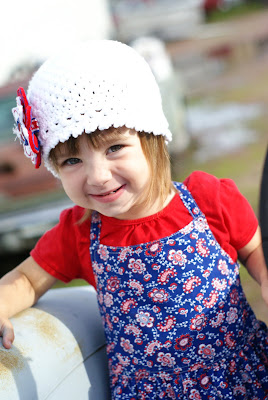 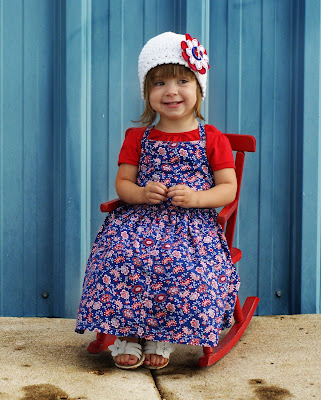 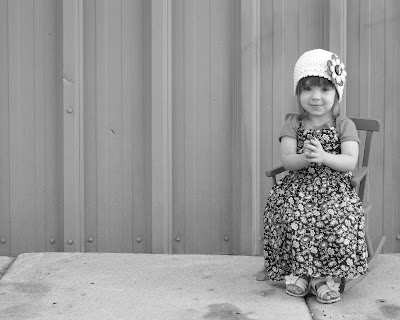 Ironically the city of Sidney puts on their firework show the day before the 4th. Partially due to the fact that the volunteer firefighters put the show on...the whole force is needed on the 4th because of personal firework calls. Justin's boss owns a home a mile from the site where the firefighters light off the show. They hosted a large BBQ this evening in the most awesome MAN DEN ever. It is a garage large enough to fit a full truck and trailer (the commercial kind) plus plenty of room. Stan has the whole place decked out with taxidermy, sports TV, bars, boats, indoor archery. couches, etc. It is HUGE!!! No wonder Susan's home is a hunting free zone. Stan grilled up a ton of meat on his over-large smoker. All the guests provided the side dishes and desserts. Before arriving at the BBQ I had Justin stop at a couple spots to take pictures of Amelia in her "4th of July configuration." She is such a ham!! It rained very hard just 30 minutes before we left so the ground was nice and soggy. She amused herself by playing with mud and rocks. She stayed clean but got me all smudged up. We made a stop home so I could change. After eating we enjoyed a performance of Stan and Susan singing Karaoke. A full-sized rainbow stretched across the sky, it's been a LONG time since I last saw a complete rainbow. At one point the rainbow doubled. It was amazing. Once full night fell (around 9:00 pm) the firefighters did a great job filling the sky with fireworks. A couple actually exploded on the ground. Thank goodness for the rain. Mia called the fireworks, "sparkies" because she couldn't pronounce sparklies. Fun evening!!

Tomorrow we have a ward breakfast, preceded by a triathlon (bummer I can't participate, I'd kick some bike butt). Afterwards we are thinking of attending Dalton Days. The city is celebrating their 100 year anniversary.