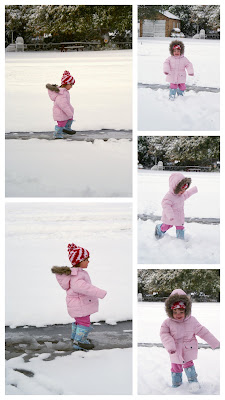 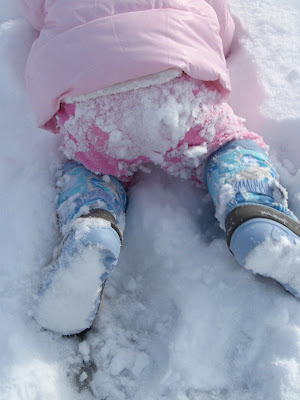 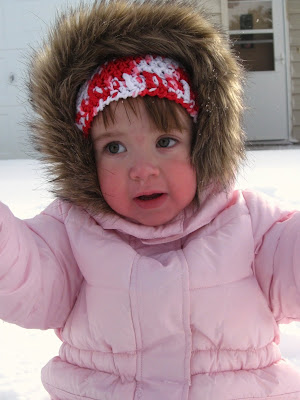 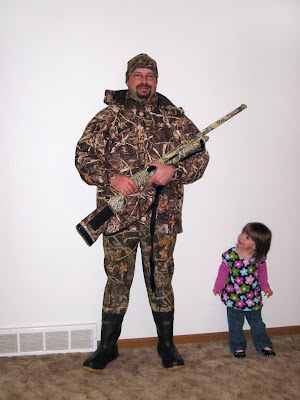 Miekka delayed her trip here until tomorrow...good thing! Sidney received about a total of 13 inches of snow, 6 sticking to the ground. It is very hard to believe we are only in the first part of October. All my winter stuff is back in storage from earlier this year. Now I need it again. Hopefully we can move in this week and solve that issue. The storm moved in Friday afternoon and snow started to fall around 9 pm. By 11:30 there was already about 5 inches on the ground. It was magical, the "snow light" and white snow glistening like a thousand crystals.

Justin was crazy enough to get up at 3 am to go duck hunting with Matt Haley and another buddy. He showed off his hunting gear before leaving. I love Amelia's expression: "What are you doing in that silly get up!" He had a great time shooting at ducks in the cold wilderness. Matt bagged 6 ducks, Justin said he missed shooting down an actual duck, BUMMER!

The kids and I mostly stayed home. Mia and I dressed up first thing and went outside to play in the snow. Amelia sang "Once There was a Snowman" over and over. She tromped in the slushy ice and crawled around in the snow. I gave her some hot chocolate once we got too cold. She was highly annoyed at me for warming up her chocolate milk...yikes!

We ventured to the library for a beading class, which was cancelled due to weather. Amelia was really crabby so we left after a little while. On our way home we showed Alison the new flooring in the house. It looks AWESOME. Pictures pending tomorrow. Mia had diarrhea on the way home causing another cleaning session in my car. Poor thing. She also threw up sometime Friday night and during her nap. Three weeks of poop and throw up is not fun! I hope she gets better soon. During naps I finished another outfit for Amelia. I crocheted a cute hat for myself as well. After dinner we went to the house for another painting session. The baseboards and trim are all finished now! The tape is off the walls. All that is left is touch up painting in red and the main beige color. My goal is to finish that tomorrow. During the week I will finish the doors. Hooray!! The house looks so awesome with its new colors.

I guess I better buy Ella some snow boots...she still doesn't have any! Cute pics and the house in amazing! I have a picture of Justin for you from hunting.

Saige can not wait until she can play in the snow! She is so excited! I love the snow too...but I can wait a month or two.

FUN! I want to see the hats and outfits you made! I'm excited to see your house!!! Snow...FUN at first, and then YUCK YUCK YUCK!!!

Amelia's cheeks look so rosy with the cold - like two ripe apples! I can't believe you have so much snow already. I am sure we are not far behind!
Love ya!
Laura