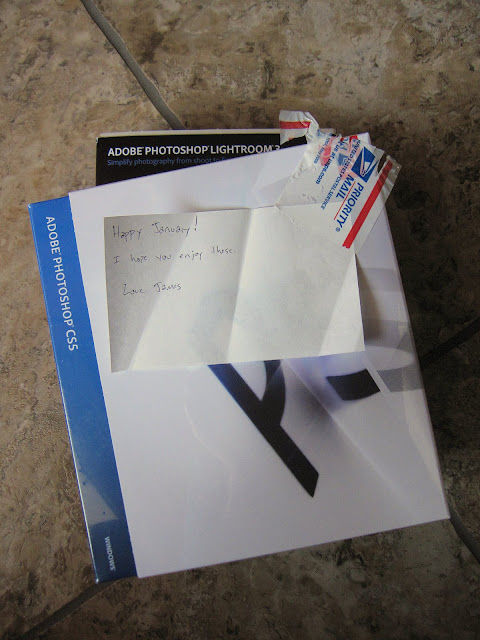 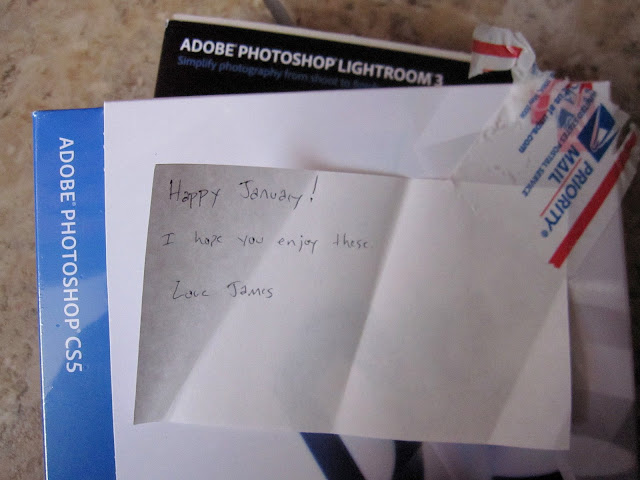 I am still, well, floored. First, Alison took both kids again this morning for part of the day. I took a long nap! That alone was needed. I heard the doorbell ring around 11:00 am. Our mail lady was standing outside with a Priority box. Once I saw who the box was from I hurriedly signed the slip and rushed inside. The box was from my brother James, mailed by his truly as well. Inside sat two computer programs, Adobe Photoshop CS5 and Adobe Lightroom 3! Both programs are considered standard for photographers and graphic designers. For 5 years I've gotten along using Photoshop Elements with excellent results. A whole new world opened up for me this afternoon. I literally was stunned for about an hour, cleaning something and then rushing back to the box to make sure I was not dreaming. The programs were still there an hour later. I called James...he really does have incredible connections! Thank you so much. James is the epitome of few words, powerful message. His little note read "Happy January! I hope you enjoy these. Love, James" I can't wait to learn the in's and out's of real Photoshop. Eeeek! Justin was in on the surprise.

On a much lesser note, one of my winter goals is to declutter the house. After three moves I never got a good chance to pare down our stuff. This week I started with the closets and bedrooms. Ahhhh, amazing how great deep cleaning can cleanse the soul. I took three trips to Salvation Army to donate stuff and several trips to the dumpster. This afternoon I sewed Amelia a new dress that I cut out last night. The dress is so cute! Soon I will get some photos up of her wearing the new little number.

Lastly....Amelia told us today she wants a dog named fish...who has a brother dog named chip. Fish and Chip(s)! Where does that kid come up with stuff like that? Phillip dumped our toothbrushes, bathroom cups, and several decorations into the toilet this afternoon. I really, really try to keep the door closed. Amelia let him in because she said his eyes looked like sad doggy eyes. Indeed?!

I'm doing virtual cartwheels and back flips for you! What a wonderful gift/surprise for you! Lights*camera*action for you!!! Can't wait to see what you can do now!

SO glad you had a long nap, the kids had a great time! How does once a week sound for you?? :)

Your last paragraph made me chuckle. Between Dani and Mia, we are in for some seriously interesting teenagers! ;) Mine will certainly outsmart me by that age! So glad Ali is able to help take the kids off your hands once in a while... I'm sure it does a great deal to hold on to your sanity! ;) Miss you!

Well look at that! Dreams do come true. Congrats on your new programs!