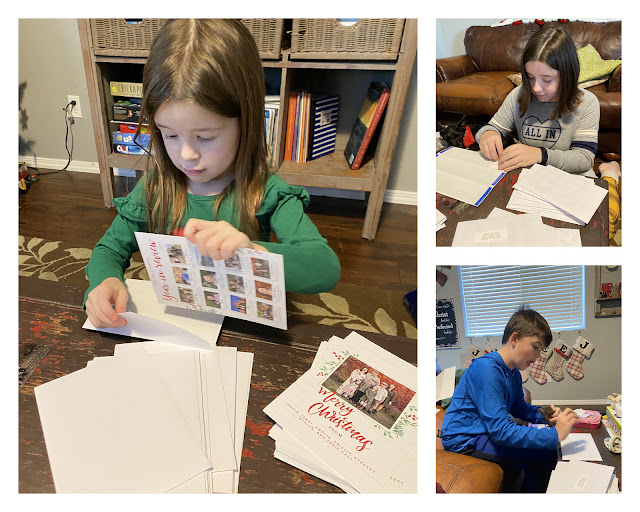 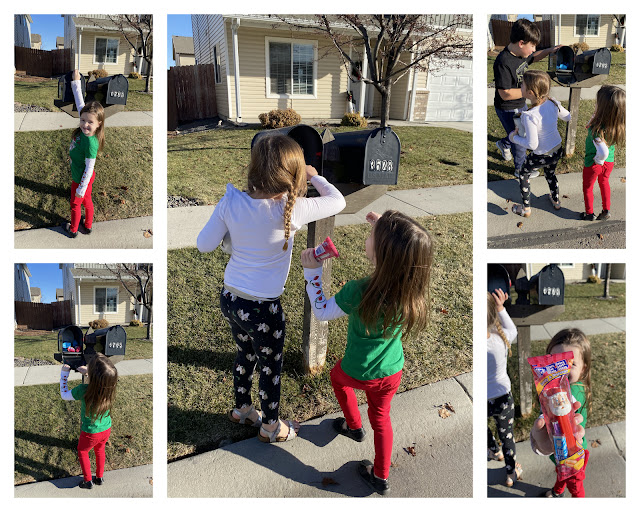 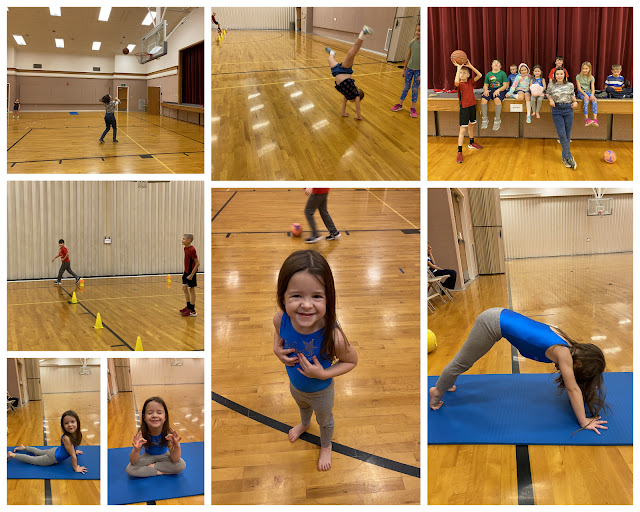 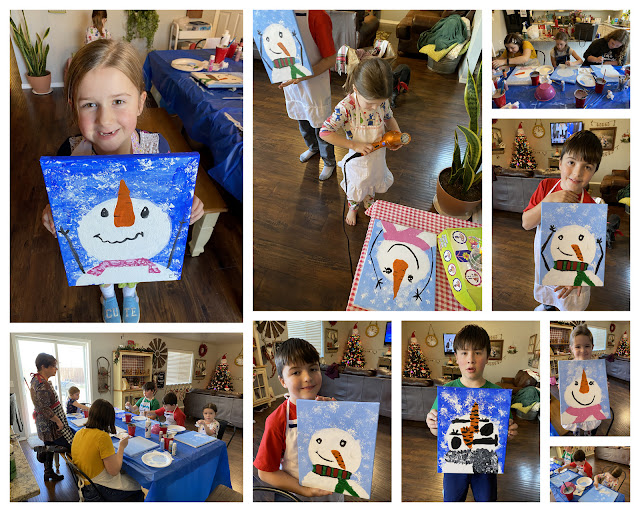 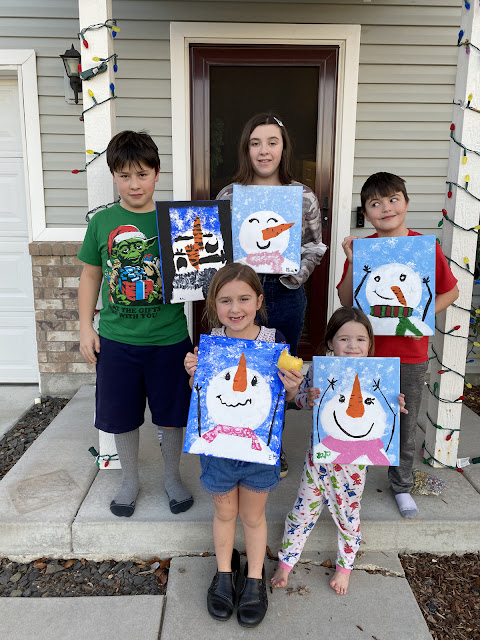 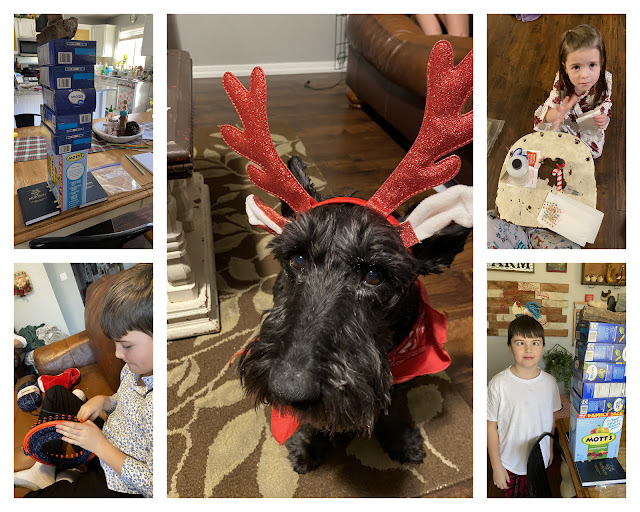 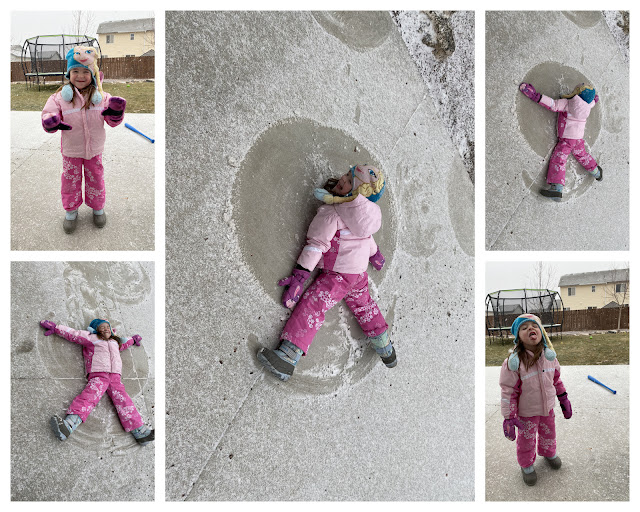 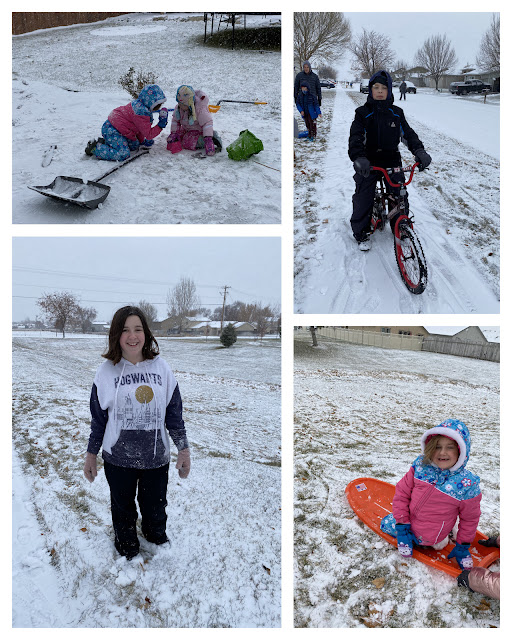 We tried very hard this week to get schoolwork done so the next week the kids could start Christmas Break early. The boys really strapped down and got their workbooks done, their math, and finished their research papers! Whoop, whoop! Evelyn is improving with her reading skills everyday. It's a relief to make some progress.

My main goal was to get all my Christmas cards mailed out last week. I was joined by Josie, Everett, and Amelia. We put on a Christmas Pandora station while we stuffed, licked, closed, and stickered through a pile of 165 cards. We need to stop moving, my list gets longer with each move. All the letters made it to the post office by Wednesday afternoon! Amelia wrote Santa a letter because I told her Santa won't bring ornery 13 year olds gifts without a written letter. Santa wrote her back! LOL! I'm still laughing. The kids all got a fun letter from Santa's workshop. Josie stuffed random stapled pieces of paper with scribbles outlining her Christmas list in the mailbox for a week straight. The Nelves finally got the hint and put a treat in the box for her. She was thrilled.

Friday we had PE at the church gym for a couple hours. Sara set up stations the kids rotated through like soccer, jump rope, yoga, jumping jacks, etc. We did that long enough to satisfy the requirements for homeschool submissions (aka take photos as proof). The next hour we played basketball and pacman chase. Josie opted out of chase to channel her inner yogi. That was a really fun morning. We cleaned up the house before the PE activity so it would be ready for our painting class. To keep the inside tidy I treated the kids to McDonald's for lunch. The boys were absolutely giddy to try the McRib, they voted a unanimous yes. Mia texted Justin so he also had a McRib for lunch out in Eagle, ID. Blech. Aunt Fawn taught us how to paint the cutest snowman. She was so efficient! Got here early, set everything up in a jiffy and had the kids painting like little angels. Phillip's inner Van Gogh emerged once he started painting the carrot nose. He went for a split nose effect with half the face going south and the other half north. We all agreed his snowman would not be the one we wanted to meet late at night. He got quite a laugh over how creepy his creation turned out. Josie loved using the hair dryer more than painting. Everett and Evelyn were so careful to follow all the directions and each painted cute versions. Amelia had Clare and Fallon over to join in the fun.

Justin and I took the evening off for Christmas shopping. I had a hankering for Indian food, I found a place in Boise to try out. Good Indian food is the best comfort food! Yum. We literally ran to the mall in order to shop at Maurices in the 30 minutes we had before closing. I ripped through the store and found a couple cute shirts! I like this clothes shopping tradition, second year in the making. We wandered around Macys then Kohls since those stores had longer hours. Justin found some comfy work-at-home apparel. I found a couple more shirts. We had a good talk about a book Garrett wanted us to read called Attached. Basically, the book takes child attachment theory and links it to adults. Pretty much we all have attachments that are stable...and plastic. I am not feeling very confident in the book's premise. Doesn't leave much room for change, basically we have to fight against our natural attachments or end our current relationships (if a couple is having troubles). Still, it does explain quite plainly how the attachment styles Justin and I have (anxious, avoidant) are difficult in relationships.

Everett experimented with making the strongest bridge he could using popsicle sticks. His final version could hold about 30 pounds! He was thrilled about that. The boys are also learning to knit on a circular loom. Phillip got to use the loom first but was kind enough to let Everett try. I got another loom. I am working on crocheting winter hats. I can't get the dang pattern sizing correct, had to rework the same hat like 5 times. The boys wanted to make their own hats, thus the loom.

Our Nelves keep surprising the kids with knocks, jingle bells, door rings, little gifts, and even candy on occasion. The Nelves left the kids cute baby Yoda figures to decorate their computers this week. Over the weekend the Nelves left a shrinky dink kit and nail art kit!

Sunday afternoon it started to snow. The kids were outside before the snow even piled up .25th of an inch! Josie made her own snow angel version on her belly! Before long, piles of wet snow clothes haunted the doorways in and out of the house. Enough snow collected by 4:30 the kids could sled a little bit down the culvert and steep street near our home. So much fun. I had a nasty migraine and felt out of sorts. I finally found a spot of time to make our (my) favorite holiday cookies. It's taken years to find a gingerbread cookie recipe that was not overly spiced and fluffy soft. These are to die for with a smatter of white chocolate and crunchy sprinkles on top. The white chocolate cherry cookies went fast, I'm training my kids to have a developed palate. Josie is excluded, give her everything plain with sugar on top.  Our family and the Ostlers are singing "The Nativity Song" in church next week. We sounded amazing packed into our front room! We're not trying to repeat the experience we had 4 years ago singing that song again...

Christmas 2016 "Our family was asked to sing "The Nativity" from pg. 52 of children's song book for Sacrament Meeting today. We nailed the first verse. During the second verse we put our stamp on it. Evelyn was finally able to reach the microphone and growl into it. While pulling her away and prying her hand off the mic, Jenni inadvertently induced some feedback into mic setting off that horrible squeal. During the third verse, Everett seeing the smiles from the congregation and small giggles decided it was his turn. He randomly leaned over into the microphone and blurted "blaaah" into the mic. He looked like he was going to back for a second round so I grabbed him by the neck and straightened him up until he started to whine. Here are some wardrobe notes. We didn't notice Everett's pants were too small until we were already at church. So he went up to sing with his pants unbuttoned and unzipped. Evelyn got play makeup for Christmas (not my idea). She painted her face before church with green and blue eye shadow so she looked a lady of the night who had possibly been punched in the eye."